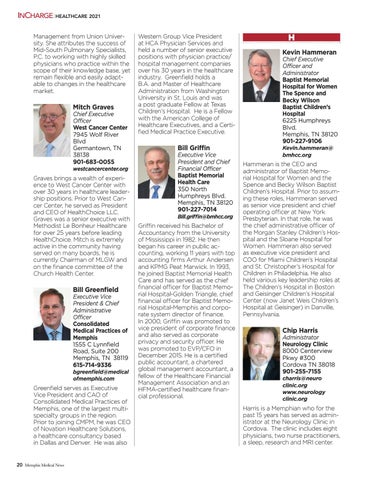 InCharge HEALTHCARE 2021 Management from Union University. She attributes the success of Mid-South Pulmonary Specialists, P.C. to working with highly skilled physicians who practice within the scope of their knowledge base, yet remain flexible and easily adaptable to changes in the healthcare market.

Graves brings a wealth of experience to West Cancer Center with over 30 years in healthcare leadership positions. Prior to West Cancer Center, he served as President and CEO of HealthChoice LLC. Graves was a senior executive with Methodist Le Bonheur Healthcare for over 25 years before leading HealthChoice. Mitch is extremely active in the community having served on many boards, he is currently Chairman of MLGW and on the finance committee of the Church Health Center.

Greenfield serves as Executive Vice President and CAO of Consolidated Medical Practices of Memphis, one of the largest multispecialty groups in the region. Prior to joining CMPM, he was CEO of Novation Healthcare Solutions, a healthcare consultancy based in Dallas and Denver. He was also

Western Group Vice President at HCA Physician Services and held a number of senior executive positions with physician practice/ hospital management companies over his 30 years in the healthcare industry. Greenfield holds a B.A. and Master of Healthcare Administration from Washington University in St. Louis and was a post graduate Fellow at Texas Children’s Hospital. He is a Fellow with the American College of Healthcare Executives, and a Certified Medical Practice Executive.

Griffin received his Bachelor of Accountancy from the University of Mississippi in 1982. He then began his career in public accounting, working 11 years with top accounting firms Arthur Andersen and KPMG Peat Marwick. In 1993, he joined Baptist Memorial Health Care and has served as the chief financial officer for Baptist Memorial Hospital-Golden Triangle, chief financial officer for Baptist Memorial Hospital-Memphis and corporate system director of finance. In 2000, Griffin was promoted to vice president of corporate finance and also served as corporate privacy and security officer. He was promoted to EVP/CFO in December 2015. He is a certified public accountant, a chartered global management accountant, a fellow of the Healthcare Financial Management Association and an HFMA-certified healthcare financial professional.

Harris is a Memphian who for the past 15 years has served as administrator at the Neurology Clinic in Cordova. The clinic includes eight physicians, two nurse practitioners, a sleep, research and MRI center.