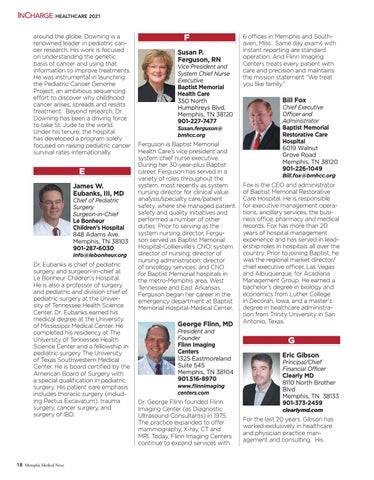 InCharge HEALTHCARE 2021 around the globe. Downing is a renowned leader in pediatric cancer research. His work is focused on understanding the genetic basis of cancer and using that information to improve treatments. He was instrumental in launching the Pediatric Cancer Genome Project, an ambitious sequencing effort to discover why childhood cancer arises, spreads and resists treatment. Beyond research, Dr. Downing has been a driving force to take St. Jude to the world. Under his tenure, the hospital has developed a program solely focused on raising pediatric cancer survival rates internationally.

Ferguson is Baptist Memorial Health Care’s vice president and system chief nurse executive. During her 30-year-plus Baptist career, Ferguson has served in a variety of roles throughout the system, most recently as system nursing director for clinical value analysis/specialty care/patient safety, where she managed patient safety and quality initiatives and performed a number of other duties. Prior to serving as the system nursing director, Ferguson served as Baptist Memorial Hospital-Collierville’s CNO; system director of nursing; director of nursing administration; director of oncology services; and CNO for Baptist Memorial hospitals in the metro-Memphis area, West Tennessee and East Arkansas. Ferguson began her career in the emergency department at Baptist Memorial Hospital-Medical Center.

6 offices in Memphis and Southaven, Miss. Same day exams with instant reporting are standard operation. And Flinn Imaging Centers treats every patient with care and precision and maintains the mission statement “We treat you like family.”

Fox is the CEO and administrator of Baptist Memorial Restorative Care Hospital. He is responsible for executive management operations, ancillary services, the business office, pharmacy and medical records. Fox has more than 20 years of hospital management experience and has served in leadership roles in hospitals all over the country. Prior to joining Baptist, he was the regional market director/ chief executive officer, Las Vegas and Albuquerque, for Acadiana Management Group. He earned a bachelor’s degree in biology and economics from Luther College in Decorah, Iowa, and a master’s degree in healthcare administration from Trinity University in San Antonio, Texas.

For the last 20 years, Gibson has worked exclusively in healthcare and physician practice management and consulting. His