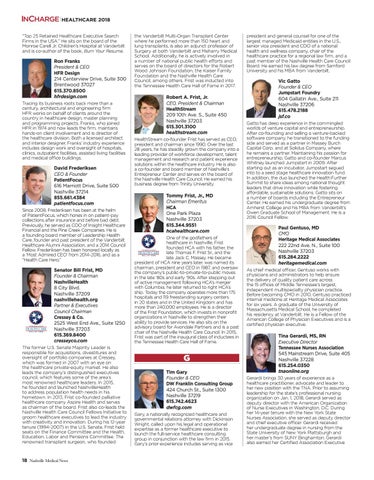 InCharge HEALTHCARE 2018 “Top 25 Retained Healthcare Executive Search Firms in the USA.” He sits on the board of the Monroe Carell Jr. Children’s Hospital at Vanderbilt and is co-author of the book, Burn Your Resume.

David Frederiksen CEO & Founder PatientFocus 616 Marriott Drive, Suite 500 Nashville 37214 855.661.4384 patientfocus.com Since 2008, Frederiksen has been at the helm of PatientFocus, which hones in on patient-pay collections after insurance and before bad debt. Previously, he served as COO of Insight Healthcare Financial and the Pine Creek Companies. He is a founding board member of Leadership Health Care, founder and past president of the Vanderbilt Healthcare Alumni Association, and a 2014 Council Fellow. Frederiksen has been honored locally as a ‘Most Admired CEO’ from 2014-2016, and as a “Health Care Hero.” Senator Bill Frist, MD Founder & Chairman NashvilleHealth 8 City Blvd. Nashville 37209 nashvillehealth.org Partner & Executives Council Chairman Cressey & Co. 2525 West End Ave., Suite 1250 Nashville 37203 615.369.8400 cresseyco.com The former U.S. Senate Majority Leader is responsible for acquisitions, divestitures and oversight of portfolio companies at Cressey, which was formed in 2007 with an eye on the healthcare private-equity market. He also leads the company’s distinguished executives council, which features some of the area’s most renowned healthcare leaders. In 2015, he founded and launched NashvilleHealth to address population health needs in his hometown. In 2013, Frist co-founded palliative healthcare company Aspire Health and serves as chairman of the board. Frist also co-leads the Nashville Health Care Council Fellows Initiative to groom healthcare executives to lead the industry with creativity and innovation. During his 12-year tenure (1994-2007) in the U.S. Senate, Frist held seats on the Finance Committee and the Health, Education, Labor and Pensions Committee. The renowned transplant surgeon, who founded

the Vanderbilt Multi-Organ Transplant Center where he performed more than 150 heart and lung transplants, is also an adjunct professor of Surgery at both Vanderbilt and Meharry Medical School. Additionally, he is actively involved in a number of national public health efforts and serves on the board of directors for the Robert Wood Johnson Foundation, the Kaiser Family Foundation and the Nashville Health Care Council, among others. Frist was inducted into the Tennessee Health Care Hall of Fame in 2017.

Robert A. Frist, Jr. CEO, President & Chairman HealthStream 209 10th Ave. S., Suite 450 Nashville 37203 615.301.3100 healthstream.com HealthStream co-founder Frist has served as CEO, president and chairman since 1990. Over the last 28 years, he has steadily grown the company into a leading provider of workforce development, talent management and research and patient experience solutions within the healthcare industry. He is also a co-founder and board member of Nashville’s Entrepreneur Center and serves on the board of the Nashville Health Care Council. He earned his business degree from Trinity University.

Tommy Frist, Jr., MD Chairman Emeritus HCA One Park Plaza Nashville 37203 615.344.9551 hcahealthcare.com One of the godfathers of healthcare in Nashville, Frist founded HCA with his father, the late Thomas F. Frist Sr., and the late Jack C. Massey. He became president of HCA nine years later, was named its chairman, president and CEO in 1987, and oversaw the company’s public-to-private-to-public moves in the late ‘80s and early ‘90s. After stepping out of active management following HCA’s merger with Columbia, he later returned to right HCA’s ship. Today the company operates more than 175 hospitals and 119 freestanding surgery centers in 20 states and in the United Kingdom and has more than 240,000 employees. He is a director of the Frist Foundation, which invests in nonprofit organizations in Nashville to strengthen their ability to provide services. He also sits on the advisory board for Avondale Partners and is a past chair of the Nashville Health Care Council. In 2015, Frist was part of the inaugural class of inductees in the Tennessee Health Care Hall of Fame.

president and general counsel for one of the largest managed Medicaid entities in the U.S., senior vice president and COO of a national health and wellness company, chair of the healthcare practice for a regional law firm, and a past member of the Nashville Health Care Council Board. He earned his law degree from Samford University and his MBA from Vanderbilt.

Vic Gatto Founder & CEO Jumpstart Foundry 604 Gallatin Ave., Suite 211 Nashville 37206 615.478.2188 jsf.co Gatto has deep experience in the commingled worlds of venture capital and entrepreneurship. After co-founding and selling a venture-backed software company, he transitioned to the funding side and served as a partner in Massey Burch Capital Corp. and at Solidus Company, where he remains a partner. Maintaining his passion for entrepreneurship, Gatto and co-founder Marcus Whitney launched Jumpstart in 2009. After starting out as an incubator, Jumpstart segued into to a seed stage healthcare innovation fund. In addition, the duo launched the Health:Further Summit to share ideas among national thought leaders that drive innovation while fostering affordable, sustainable solutions. Gatto sits on a number of boards including the Entrepreneur Center. He earned his undergraduate degree from Amherst College and his MBA from Vanderbilt’s Owen Graduate School of Management. He is a 2016 Council Fellow.

Paul Gentuso, MD CMO Heritage Medical Associates 222 22nd Ave. N., Suite 100 Nashville 37203 615.284.2222 heritagemedical.com As chief medical officer, Gentuso works with physicians and administrators to help ensure the delivery of quality patient care across the 15 offices of Middle Tennessee’s largest, independent multispecialty physician practice. Before becoming CMO in 2010, Gentuso practiced internal medicine at Heritage Medical Associates for six years. A graduate of the University of Massachusetts Medical School, he completed his residency at Vanderbilt. He is a Fellow of the American College of Physician Executives and is a certified physician executive.

Tina Gerardi, MS, RN Executive Director Tennessee Nurses Association 545 Mainstream Drive, Suite 405 Nashville 37228 615.254.0350 tnaonline.org Gerardi brings 30 years of experience as a healthcare practitioner, advocate and leader to her new position with the TNA. Prior to assuming leadership for the state’s professional nursing organization on Jan. 1, 2018, Gerardi served as deputy director with the American Organization of Nurse Executives in Washington, D.C. During her 14-year tenure with the New York State Nurses Association, she served as deputy director and chief executive officer. Gerardi received her undergraduate degree in nursing from the State University of New York Plattsburgh and her master’s from SUNY Binghamton. Gerardi also earned her Certified Association Executive