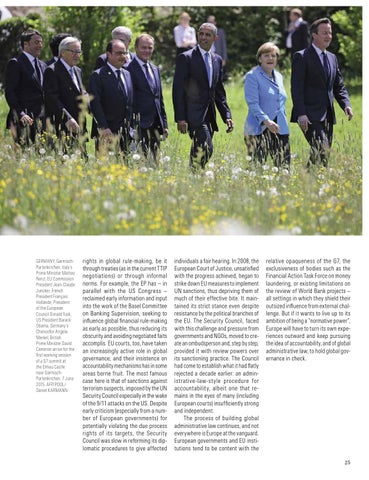 rights in global rule-making, be it through treaties (as in the current TTIP negotiations) or through informal norms. For example, the EP has – in parallel with the US Congress – reclaimed early information and input into the work of the Basel Committee on Banking Supervision, seeking to influence global financial rule-making as early as possible, thus reducing its obscurity and avoiding negotiated faits accomplis. EU courts, too, have taken an increasingly active role in global governance, and their insistence on accountability mechanisms has in some areas borne fruit. The most famous case here is that of sanctions against terrorism suspects, imposed by the UN Security Council especially in the wake of the 9/11 attacks on the US. Despite early criticism (especially from a number of European governments) for potentially violating the due process rights of its targets, the Security Council was slow in reforming its diplomatic procedures to give affected

individuals a fair hearing. In 2008, the European Court of Justice, unsatisfied with the progress achieved, began to strike down EU measures to implement UN sanctions, thus depriving them of much of their effective bite. It maintained its strict stance even despite resistance by the political branches of the EU. The Security Council, faced with this challenge and pressure from governments and NGOs, moved to create an ombudsperson and, step by step, provided it with review powers over its sanctioning practice. The Council had come to establish what it had flatly rejected a decade earlier: an ad­min­ istrative-law-style procedure for accountability, albeit one that re­mains in the eyes of many (including European courts) insufficiently strong and independent. The process of building global administrative law continues, and not everywhere is Europe at the vanguard. European governments and EU institutions tend to be content with the

relative opaqueness of the G7, the exclusiveness of bodies such as the Financial Action Task Force on money laundering, or existing limitations on the review of World Bank projects – all settings in which they shield their outsized influence from external challenge. But if it wants to live up to its ambition of being a “normative power”, Europe will have to turn its own experiences outward and keep pursuing the idea of accountability, and of global administrative law, to hold global governance in check.

The bilingual review from The Graduate Institute in Geneva 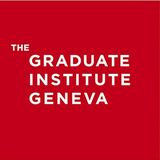