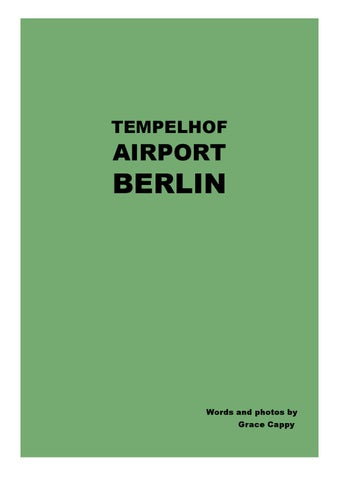 Words and photos by Grace Cappy

Tempelhof Airport, one of the largest architectural structures in the world, dominates the landscape of Berlin. Reminiscent of the utopian architectural ideas of Le Corbusier it once boasted everything from a bowling alley to secret archive bunkers. The airport now waits in limbo as its Nazi history and size means that its future is unsure. The project consists of a series of photographs from a tour taken around the airport and reflections upon personal experience within the space.

The runway and airfield make up a substantial part of the airports almost 4 kilometer2 size. The Naziâ&amp;#x20AC;&amp;#x2122;s preoccupation with grandeur meant that everything had to be bigger and better than everything else, regardless of cost, practicality and consequence.

This area of the airport was one of the last unfinished rooms. The walls of the room have been stripped of the granite faรงade that is seen throughout the rest of the airport. The expensive material has been used to finish some of the more public areas, leaving exposed brick- work, joists and supports.

From a shopping centre to a basketball court, Tempelhof had it all under one roof. This area was used for recreation by soldiers that were living and working within Tempelhof Airport. It has now sat unused since itâ&amp;#x20AC;&amp;#x2122;s closure and it is likely to for many years. This area of contested space like so many in Berlin means that the future of Tempelhof is unsure.

We ventured into the underground areas of Tempelhof, walking past huge boiler rooms that eventually lead to the secret documents bunkerâ&amp;#x20AC;¨that was used by the Naziâ&amp;#x20AC;&amp;#x2122;s to store and destroy important documents. Names and markings were scratched into the black walls, sometimes covering entire walls. The bunker was eerie and unnerving and really represented the darker side of Tempelhof, removing the faĂ§ade of grandeur and extravagance and exposing the darkness and secrets of Tempelhofs history.