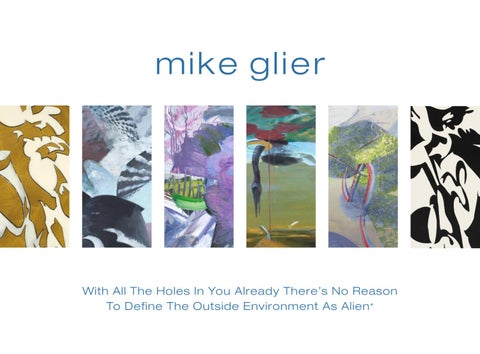 With All The Holes In You Already Thereâ&#x20AC;&#x2122;s No Reason To Define The Outside Environment As Alien *

Imminence and Intimacy: Mike Glier’s Landscapes In a move that we might now melancholically assess as

disturbed orientation, the control that the land—and those influencing

a rehearsal for another paired destruction, the Taliban leveled the

its form—has on me is visceral. Even in absence, in that shaft of sky torn

monumental statues of Buddha in the Bamiyan Valley of central

into another history, landscape touches every part of me.

Afghanistan in March of 2001. Carved into a cliff, hewn directly from Those nefarious alterations—in Afghanistan and Manhattan—

the sandstone banks with details plainly elaborated in mud mixed with straw, the sixth century statues were constructed when this corridor of earth was a holy Buddhist site along the Silk Road and not the geopolitical formation now so completely associated—even if unfairly— with war and global terror. Though we live in the wake of their end, the ultimate destruction of the statues only came after many attempts to vanquish this land of the faces and bodies it once wore. The Mughals, the Persians, and an early Afghan king—all former claimants to this place—attempted to violently efface these signs of the past well before the Taliban. This violent reflex to render the land to a place and time as if without touch, to return it to an impossible point of unfettered nature that would seem as natural as the inevitability of that particular present’s primacy, seems endemic to power or at least acts as a claim to power’s mechanisms. Though infinitely less consequential than the devastating loss of life suffered and the disastrous wars that the September attacks

attempt to control by projecting a desired history, an imaginary tabula rasa where power can be displayed. But would we be surprised if the same were said about the history of landscape and the history of landscape painting itself? W.J.T. Mitchell, the cultural theorist, has written exactly that: “Landscape might be seen more profitably as something like the ‘dreamwork’ of imperialism, unfolding its own movement in time and space from a central point of origin and folding back on itself to disclose both utopian fantasies of the perfected imperial prospect and fractured images of unresolved ambivalence and unsuppressed resistance.” Mitchell’s argument is structured by the concept that landscape is not a genre of painting or anything else but a multiply-constituted medium (stone, water, sky, vegetation, sound, light, etc.). As such, landscape is a repository for values and meanings that can be encoded and ascribed to it like any other medium.

a point of reference. The sky itself seemed sliced. I still catch myself

long landscape painting practice with this miserable and too familiar

in Manhattan looking up to determine south. In these moments of

history and this critique of the medium and genre he has embraced?

landscape that Mitchell associates with it by critically examining the

operations of both media at hand, landscape and painting. By doing

so, he not only reveals the precariousness of our ecological state but

a tree in dying bloom becoming cloud, I am far from misery. When

suggests that embodied performances of reflection and resistance—

his DeKooning-like skeins of mustard and ochre spill into language,

or at least a remnant of script, when suggesting an early fall sky in a

violently shape vision and the world we are left to perceive. If landscape

motion like transcription, I am lost in knots of sensation. I begin with

is in a continuous state of both being shaped and shaping behavior,

painting becomes a way to touch back, a means to model resistance to

disaster that does, as any good doctor would, no harm.

from pleasure—as in any dialectic—when looking at landscape. As I am susceptible to this volatility of emotion that landscape can evoke, I am suspect of it. Landscape seems out of my control or, perhaps, too much under the control of others—as Mitchell suggests—who would want to control me. And then I grow wary of joy—my own, the very possibility of it—when I try to transpose Bamiyan or other sites of cultural or ecological collapse over anything as transcendent as Mt. Hope. But perhaps doubt is also implicit to Glier’s act of painting. I ascribe transcendence to Mt. Hope, but is this what the painting really depicts? Or does Mt. Hope function here not as dreamwork or as fact or as a category but more simply as a proposal? Perhaps to think of Glier’s painting as a proposal—as an act inscribed in but also losing time—is to think of landscape in a perpetual state of imminence. Though about to occur, it never comes. Our only responsibility is to work against an end.

Glier has premised three of his projects on following

geographic coordinates to determine his site of production. In 2005, he began the “Latitude” series and painted near his studio in Hoosick, New York, the spin of the earth as it traffics the sun providing the changing context for what would appear in paint. From Pangnirtung, Canada, to San Cudo, Ecuador, to the island of St. John, to Manhattan—and from June of 2007 to May of 2008—the second series, “Along a Long Line,” took a single line of longitude as a space to cover and describe. The latest project, “Antipodes,” finds him painting on two sites on opposite points of the globe. Glier painted in Botswana in 2009 and in Hawaii in 2010. Work this past year in New Zealand is to be complemented by a still to be realized project in Spain. By establishing sites in a Lewittian preestablished order where latitudinal and longitudinal points are determined in advance and worked through, Glier can paint the

It is my contention that Glier outflanks the dangers of

particularity of geographical locales but in a system that also embraces

equivalence and non-preference. No particular value is given to one

is nearly redundant. Time also pales. The fragile body of the maker

place, one vista, one tree, one sky, over another. It is, in the words

of Donald Judd, one thing after another. This practice of radical

an honest, if not melancholic, double task—the act of making is

equivalence and the embrace of a plurality of scenics and picturesques

also one of encountering one’s own undoing. In this witnessing and

reveal the ecological concerns that underpin the project as a totality.

making, Glier establishes himself, what he sees, and the painting made

In the very enumeration of paintings from a multiplicity of sites, import

all as constructions continuously caught within a web of factors—

the expense of another. Glier paints the very impossibility of thinking

the very existence of each. Just as the radical equivalence of Glier’s

the existence of one place without the reciprocal vitality of the other.

sites establishes an order that resists hierarchies of worlds (first, for

If this procedural investigation of the landscape medium suggests his

example, is no more significant that second or third worlds), his acts

demonstration of the interdependency of the ecological order (one

of painting—between gestural and precision, between abstract and

obviously far from an imperial one), the individual labor evident in

referential—disavow stasis and the operations of power that stasis

his interrogation of the medium of painting suggests an unflagging

conceals by demonstrating the enormous heave of flux and change in

commitment to personal perception and action in daily life.

each moment. The landscape, in such a schema, never is. Just like the artist who depicts it, and the process of painting itself, it is incessantly

If gestural painting as a historical discipline and medium has any contemporary relevance in a world where image-making is devoured by the digital, it is in its requirement that a body be attached to the apparatus in the act of making a presence known. Time is complicit with touch when Glier marks his surface, with the transmission of perceptual data into a physical response that yields a trace. But just as potentiality is inscribed in each act of making and looking, so is loss. When you see the disturbances of whites and

being made, shoved into existence, and threatened with annihilation. The empathetic work that Glier performs in these paintings is in his attending to these changes and insisting that landscape also creates him. It is not a retrograde call to return to the land or to escape the time in which we live for an imagined better one. The paintings model a mutable world embedded in a particular historical moment when the very future of a stable ecological order is in serious doubt. The ultimate task is to see if change can be tipped away from collapse.

Glier functions not only as a painter and a theorist of

landscape and ecology in this practice, but he also assumes a position

takes to the landscape both far from and close to home—and here,

that has been maligned in modernity: the storyteller. The activity of the

unsurprisingly, he functions within both categories Benjamin describes

storyteller, as discussed by Walter Benjamin in his essay on the Russian

as the bearers of the storytelling tradition, “the trading seaman” and “the

author Nikolai Leskov, already had lost favor at the conclusion of World

seen and shared by persons throughout time. His paintings aren’t

the communication of experience nearly impossible. This process of

the recordings of the newly discovered or renderings that wring out

alienation—from others, from political orders, from the very shape of

common references and leave us with a personal or hermetic system

the land—made unadorned information the substitute for knowledge

of signs. Through titles, Glier places us. In his paintings, through the

gained through experience. The inability to access formerly shared

hook of a limb or the sine curve of a flinty valley, we are given signposts

collective memories left vacant the role that the storyteller once

for places we might go. It is even more than conceivable that another

even quaint. At a moment when crowd-sourcing dictates marketing

mountain or stood under that very tree. But the issue at stake in the

and decision-making and information is the main byproduct of the

digital empire we are subjects of, our time is also not one friendly to

the telling. It is the activity of placing one’s self in the current of what

the storyteller. We already know, we think. We don’t need your tedious

has come before and acknowledging what has changed. The helix-

practical lessons gained from something so antiquated and subjective

like entangling of convention and innovation avows a connection to

the collective as it demonstrates the centrality of individual acts in the making of future shared memories. If Glier’s story ultimately is in the

But such a conception of storytelling fails to understand it as an accretive process, one formed not in isolation but in the aggregation of voices and historical narratives, one that treats a story— or a landscape—as a script to be worked on as a form of maintenance and not simply rehearsed. Unlike the work of the novelist which is

contemporary tradition of the environmental protection movement that emerged in the late 1960s and saw nature as a social movement, his is also a story of personal intimacy and proximity. These places he has been, that he has painted and experienced, he desperately wants for himself as well as us.

done in isolation and produces a product for private consumption, the storyteller only can function in the presence of others. The storyteller’s activity of listening is indelibly bound to his ability to tell. When Glier With All The Holes In You Already There’s No Reason To Define The Outside Environment As Alien* The environment is an urgent subject and f...

With All The Holes In You Already There’s No Reason To Define The Outside Environment As Alien* The environment is an urgent subject and f...