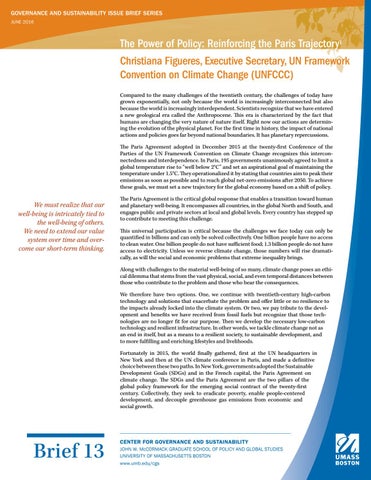 The Power of Policy: Reinforcing the Paris Trajectory1 Christiana Figueres, Executive Secretary, UN Framework Convention on Climate Change (UNFCCC) Compared to the many challenges of the twentieth century, the challenges of today have grown exponentially, not only because the world is increasingly interconnected but also because the world is increasingly interdependent. Scientists recognize that we have entered a new geological era called the Anthropocene. This era is characterized by the fact that humans are changing the very nature of nature itself. Right now our actions are determining the evolution of the physical planet. For the first time in history, the impact of national actions and policies goes far beyond national boundaries. It has planetary repercussions. The Paris Agreement adopted in December 2015 at the twenty-first Conference of the Parties of the UN Framework Convention on Climate Change recognizes this interconnectedness and interdependence. In Paris, 195 governments unanimously agreed to limit a global temperature rise to “well below 2°C” and set an aspirational goal of maintaining the temperature under 1.5°C. They operationalized it by stating that countries aim to peak their emissions as soon as possible and to reach global net-zero emissions after 2050. To achieve these goals, we must set a new trajectory for the global economy based on a shift of policy.

We must realize that our well-being is intricately tied to the well-being of others. We need to extend our value system over time and overcome our short-term thinking.

The Paris Agreement is the critical global response that enables a transition toward human and planetary well-being. It encompasses all countries, in the global North and South, and engages public and private sectors at local and global levels. Every country has stepped up to contribute to meeting this challenge. This universal participation is critical because the challenges we face today can only be quantified in billions and can only be solved collectively. One billion people have no access to clean water. One billion people do not have sufficient food; 1.3 billion people do not have access to electricity. Unless we reverse climate change, those numbers will rise dramatically, as will the social and economic problems that extreme inequality brings. Along with challenges to the material well-being of so many, climate change poses an ethical dilemma that stems from the vast physical, social, and even temporal distances between those who contribute to the problem and those who bear the consequences. We therefore have two options. One, we continue with twentieth-century high-carbon technology and solutions that exacerbate the problem and offer little or no resilience to the impacts already locked into the climate system. Or two, we pay tribute to the development and benefits we have received from fossil fuels but recognize that those technologies are no longer fit for our purpose. Then we develop the necessary low-carbon technology and resilient infrastructure. In other words, we tackle climate change not as an end in itself, but as a means to a resilient society, to sustainable development, and to more fulfilling and enriching lifestyles and livelihoods. Fortunately in 2015, the world finally gathered, first at the UN headquarters in New York and then at the UN climate conference in Paris, and made a definitive choice between these two paths. In New York, governments adopted the Sustainable Development Goals (SDGs) and in the French capital, the Paris Agreement on climate change. The SDGs and the Paris Agreement are the two pillars of the global policy framework for the emerging social contract of the twenty-first century. Collectively, they seek to eradicate poverty, enable people-centered development, and decouple greenhouse gas emissions from economic and social growth.

evolution supported by a new approach to problem solving at the global scale. To this end, diverse actors ranging from governments to businesses to individuals, with different resource endowments and different values and aspirations, need to be involved in finding solutions to the climate crisis and fast-forwarding the opportunities. The Paris Agreement confirmed the trajectory toward such a vision. We already have $300 billion invested annually into renewable energy. Morocco has the largest concentrated solar power plant in the world. The prince of the United Arab Emirates announced he wants to be alive when the UAE exports its last barrel of oil. Saudi Arabia is selling its oil and gas assets to capitalize a $2–3 trillion fund to prepare Saudi Arabia for a post-oil era. In developed countries, electric vehicles already cost $30,000 and falling. Globally, the past two years have seen an increase in economic growth and a decrease in emissions, showing perhaps that a decoupling of GDP and emissions is happening and is possible.

The entrance to the United Nations Climate Change Conference in Le Bourget, France, illustrated the world’s unity on climate change.

The SDGs are an aspirational vision of the society we want to live in. The Paris Agreement is a legally binding agreement to decarbonize society. This is the first time in history that we have been able to rise to the challenge and make an intentional decision to transform the trajectory of the global economy. The SDGs and the Paris Agreement exemplify the power of policy to affect change. Together, they articulate a high vision that sends a strong signal that change is coming and that all constituencies must play their part. With these agreements, we now have a global policy that is responsive to science and sets the course toward a decarbonized society with a stable and safe future.

Never before have we had the transformational opportunity to lift billions out of poverty in a way that is long-lasting and will not leave anyone behind. Every single human being alive right now has the responsibility to ensure the world that is coming is substantially better than the one we inherited. The pace of progress will be determined by the most important shift that the international community still needs to make—a shift in values. As agreed in Paris, we need to extend our value system, relinquish our self-centered attitudes, and think beyond the confines of our immediate surroundings.

These new global agreements have set the direction for change. What is critical now is for us to set the speed of change. Three factors will determine it: the effectiveness of policy, the pace of technology development and dissemination, and speed of the capital shift. If these three factors work in support of each other, we can begin building the reality of the future, a vibrant one!

We must realize that our well-being is intricately tied to the well-being of others. We need to extend our value system over time and overcome our short-term thinking. Global environmental challenges require long-term commitment and

Imagine the cities that we will build in this century. These cities will not be characterized by urban sprawl, traffic congestion, and pollution. They will be urban gardens built for people. They will have capacity to produce food, recycle water, and generate the energy they need. Imagine a world where every single home—urban and rural—has electricity. Every child will be able to study at night and families do not have to cook on open fires. Just those two changes will make a world of difference to billions of people, and create a safer, more productive world for all of us. Let’s remember that the most affected billions reside in the countries least able to act. Resolving this quandary requires shifting from narrowly defined national interests to an internalized notion of global interdependence. Such a shift needs to encompass both a technological revolution and an ethical

investment, as the effects of todayâ&#x20AC;&#x2122;s environmental degradation will be experienced most intensely by future generations. Indeed, the young people of today are the first generation that enters the workforce in full knowledge that our planet has changed. I am both pained and excited for the new generation. Can you imagine the number of new industries that are going to be created and the new professions that are going to be available? Our generation had the responsibility to understand climate change and initiate our response. The next generation has the responsibility and the opportunity to address it effectively. As we know, each generation in turn must return to their children the planet they have temporarily borrowed from them. I put my full trust into the next generation. I trust they have seen and understand the power of policy. I trust they will use that lever for the common good.

On September 25, 2015, countries adopted a set of goals to end poverty, protect the planet, and ensure prosperity for all as part of a new sustainable development agenda. Each goal has specific targets to be achieved over the next 15 years.

Endnotes This article is based on a public lecture Christiana Figueres delivered on April 6, 2016, at a University of Massachusetts Boston event.

Christiana Figueres is an international leader on strategies to address global climate change at high-level national and international policy and multilateral negotiations. Previously she was a member of the Costa Rican climate change negotiating team at the United Nations, a member of the Executive Board of the Clean Development Mechanism, and Vice President of the Bureau of the Conference of the Parties in 2008–2009. She has been the Executive Secretary of the United Nations Framework Convention on Climate Change (UNFCCC) since July 2010. She holds a master’s degree in anthropology from the London School of Economics and a certificate in organizational development from Georgetown University. She has also received honorary doctorate of law degrees from the University of Massachusetts Boston in 2014 and Concordia University in 2015, and an honorary degree from Georgetown University in 2016.

Center for Governance and Sustainability Center for Governance and Sustainability

Article is based on a public lecture Christiana Figueres delivered on April 6, 2016, at a University of Massachusetts Boston event.

Article is based on a public lecture Christiana Figueres delivered on April 6, 2016, at a University of Massachusetts Boston event.