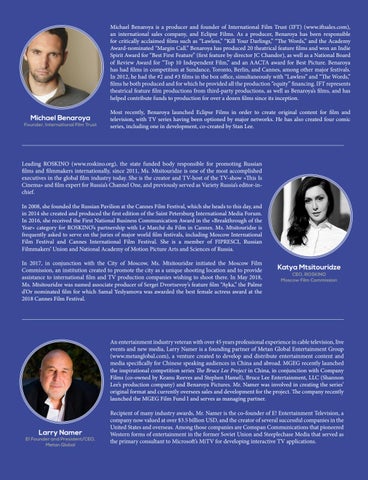 Michael Benaroya is a producer and founder of International Film Trust (IFT) (www.iftsales.com), an international sales company, and Eclipse Films. As a producer, Benaroya has been responsible for critically acclaimed films such as “Lawless,” “Kill Your Darlings,” “The Words,” and the Academy Award-nominated “Margin Call.” Benaroya has produced 20 theatrical feature films and won an Indie Spirit Award for “Best First Feature” (first feature by director JC Chandor), as well as a National Board of Review Award for “Top 10 Independent Film,” and an AACTA award for Best Picture. Benaroya has had films in competition at Sundance, Toronto, Berlin, and Cannes, among other major festivals. In 2012, he had the #2 and #3 films in the box office, simultaneously with “Lawless” and “The Words,” films he both produced and for which he provided all the production “equity” financing. IFT represents theatrical feature film productions from third-party productions, as well as Benaroya’s films, and has helped contribute funds to production for over a dozen films since its inception.

Most recently, Benaroya launched Eclipse Films in order to create original content for film and television, with TV series having been optioned by major networks. He has also created four comic series, including one in development, co-created by Stan Lee.

Leading ROSKINO (www.roskino.org), the state funded body responsible for promoting Russian films and filmmakers internationally, since 2011, Ms. Mtsitouridze is one of the most accomplished executives in the global film industry today. She is the creator and TV-host of the TV-show «This Is Cinema» and film expert for Russia’s Channel One, and previously served as Variety Russia’s editor-inchief. In 2008, she founded the Russian Pavilion at the Cannes Film Festival, which she heads to this day, and in 2014 she created and produced the first edition of the Saint Petersburg International Media Forum. In 2016, she received the First National Business Communication Award in the «Breakthrough of the Year» category for ROSKINO’s partnership with Le Marché du Film in Cannes. Ms. Mtsitouridze is frequently asked to serve on the juries of major world film festivals, including Moscow International Film Festival and Cannes International Film Festival. She is a member of FIPRESCI, Russian Filmmakers’ Union and National Academy of Motion Picture Arts and Sciences of Russia. In 2017, in conjunction with the City of Moscow, Ms. Mtsitouridze initiated the Moscow Film Commission, an institution created to promote the city as a unique shooting location and to provide assistance to international film and TV production companies wishing to shoot there. In May 2018, Ms. Mtsitouridze was named associate producer of Sergei Dvortsevoy’s feature film “Ayka,” the Palme d’Or nominated film for which Samal Yeslyamova was awarded the best female actress award at the 2018 Cannes Film Festival.

Recipient of many industry awards, Mr. Namer is the co-founder of E! Entertainment Television, a company now valued at over $3.5 billion USD, and the creator of several successful companies in the United States and overseas. Among those companies are Comspan Communications that pioneered Western forms of entertainment in the former Soviet Union and Steeplechase Media that served as the primary consultant to Microsoft’s MiTV for developing interactive TV applications.