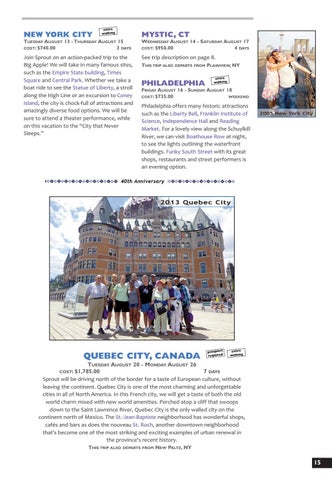 Join Sprout on an action-packed trip to the Big Apple! We will take in many famous sites, such as the Empire State building, Times Square and Central Park. Whether we take a boat ride to see the Statue of Liberty, a stroll along the High Line or an excursion to Coney Island, the city is chock-full of attractions and amazingly diverse food options. We will be sure to attend a theater performance, while on this vacation to the “City that Never Sleeps.”

Philadelphia offers many historic attractions such as the Liberty Bell, Franklin Institute of Science, Independence Hall and Reading Market. For a lovely view along the Schuylkill River, we can visit Boathouse Row at night, to see the lights outlining the waterfront buildings. Funky South Street with its great shops, restaurants and street performers is an evening option.

7 DAYS Sprout will be driving north of the border for a taste of European culture, without leaving the continent. Quebec City is one of the most charming and unforgettable cities in all of North America. In this French city, we will get a taste of both the old world charm mixed with new world amenities. Perched atop a cliff that swoops down to the Saint Lawrence River, Quebec City is the only walled city on the continent north of Mexico. The St.-Jean-Baptiste neighborhood has wonderful shops, cafés and bars as does the nouveau St. Roch, another downtown neighborhood that's become one of the most striking and exciting examples of urban renewal in the province's recent history. THIS TRIP ALSO 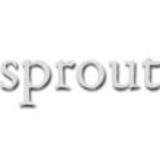