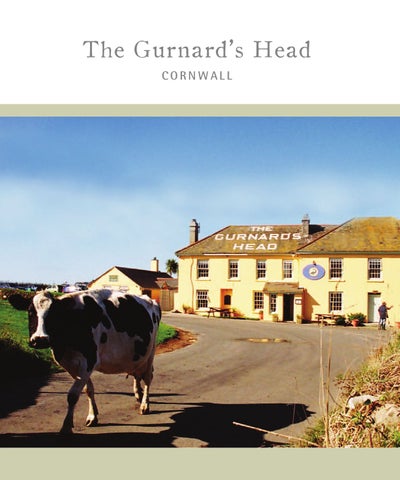 Clinging to the toe of Cornwall, dipping into the wild Atlantic waters, the Gurnard’s Head feels as though it lies at the very end of the earth. In the early morning, as cows meander to their milking shed, sea mists roll back to reveal the mellow ochre walls of this fine old “pub with rooms”. (Charles disregards the term ‘gastropub’, though the pub does serve fine modern food at laid-back tables.) Charles and Edmund bought the Gurnard’s a few years ago after creating the successful Felin Fach Griffin in Wales. They have quickly transformed this one too, with an intuitive sense of what people nowadays want. It was overhauled dramatically in a month. Out went the black-and-white décor and the horse brasses, in came a palette of earthy, limebased colours and a contemporary informality. Small bedrooms upstairs were quickly upgraded – to warm and cosy, simple and spotless, with Vi-sprung mattresses, crisp white linen, Roberts radios and armchair throws, while the suite has gained a big tub – for a deep soak after a long day’s walking. One of the most impressive aspects of the conversion is that the locals remained loyal to the place throughout the process, and still are. And Charles and Edmund feel strongly that this is where their loyalties lie, whatever the demands of the ‘emmets,’ as the tourists are called (the word comes from an Old English word for ‘ant’). They were born in Wales, on a farm where they had to get up at five in the morning and stumble

over to the dairy for fresh milk. “Mum had a stunning kitchen garden and we ate, of course, what was available in season.” Their father had been a colonel in the Royal Welsh Fusiliers, then retired and took to farming and politics, famously keeping his deposit against Michael Foot in the Labour stronghold of Ebbw Vale. “Home is where our understanding of taste, food and freshness stems from. We enjoyed it as children and we are enjoying it now. There were no supermarkets and we just walked into the garden to pick things.” In Wales they have created an organic kitchen garden for the Felin Fach Griffin; they know that won’t be so easy on a cliff top in Cornwall, but they are starting with a herb garden, and have already determined to source everything from within ten miles. Edmund says: “As with the Griffin, the ethos that underlies what we do here can best be summed up as ’the simple things in life, done well’. This appears to suit the West Cornwall environment even better than the Welsh. And we have tried to put the Gurnard’s once again at the centre of its rural community. The beer is amazing value, drinkers are as welcome as stayers and eaters, and we try to give as much employment to local people as possible. Importantly, in high season, we don’t betray our local trade for the lucre of the tourism trade.” The pub’s reputation is riding high and that brings its own challenges – in July there can be a 37

hundred food orders a day and the kitchens have to adapt. “The food then has to be faster but still as good,” says Charles. “I am toying with the idea of building an outdoor clay pizza oven and a barbecue for fresh fish.” The head chef, Matt Williamson, is from New Zealand and revels in the output of the west country fields. He is obsessed with developing great flavours from simple ingredients, so all the bread is homemade, as are the jams, marmalades, relishes, terrines, pork pies, salamis and fruit jellies. Beef is salted on the premises, fish are smoked on a homemade smoker behind the kitchen. The very freshest fish has been known to go out as sushi. Salad leaves, fruit and vegetables are brought to the kitchen door by the farmer’s wife (and anyone else who has spare homegrown produce they’d like to sell). Matt is mastering the perfect Slow Sunday lunch using rib of beef cooked overnight and local potatoes roasted to perfection. The satisfaction of knowing that everything on the plate has come from within a ten-mile radius of the Gurnards is huge. Breakfast is held at a single large table – an old baker’s table – looking out to the Atlantic. The mood is relaxed: newspapers, kippers, no rush. Checkout times are suggested rather than obligatory. Charles and Edmund have also reintroduced the live Cornish Bluegrass music sessions that had been abandoned by the previous owners in spite of the Gurnard’s being a famous old venue. These can be as simple and informal as one man singing at the bar for an hour or two. The pub was also renowned as a serious watering hole for St Ives’ artists and once again art hangs on the walls – “we hope that the Gurnard’s will become known for showcasing the amazing talent in the area” – books fill every shelf, too; if you pick one up and don’t finish it, you can take it home and post it back or leave another to replace it. This great little place is “about trying to make people feel as if they are in their own home, at the same time as keeping the standards of inn-keeping high. Importantly, we are not trying to make every last pound from each and every customer; a pot of afternoon tea will not be charged to a room, we don’t 38

ask for supplements for dogs or for cots.” And wine is priced fairly and in way that would shame some London restaurants. As for the greenness of the Gurnard’s, Edmund says, “I am not going to make any extravagant claims. It is something that we are committed to taking a good look at and we want to get it right. For the moment, we are concentrating on doing things the right way in the kitchen, keeping our food miles down, and observing basic common sense habits.” Years ago some Kentish farmers bought up a large swathe of West Penwith and merged several farms in order to introduce industrial farming; their efforts have not reached far. A little way down the coast road, Gilly Wyatt Smith, who once ran the Slad Gallery in Gloucestershire, grows herbs and oriental salad leaves that she delivers to the pub. Mackerel is easy to come by; strawberries can be bought at the small farm shops that are springing up all over Cornwall. Asparagus too. “It is all incredibly good value and fresh beyond belief,” says Charles. This is a lovely part of Cornwall, with countless exquisite bays and cliffs to enjoy. The flowers in spring are a delight, and the hedgerows and lanes are just as they were centuries ago. Charles urges exploration of the area and the combination of the deep pleasures of walking, eating and sightseeing. He lures those staying in St Ives... “There’s a wonderful walk here from the town. You can arrive for lunch and afterwards catch a bus back at 4pm from right outside the pub. If it’s a doubledecker, as it sometimes is, it’s a scenic tour with breathtaking views from the top over the hedgerows to the sea.” 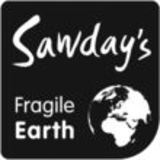