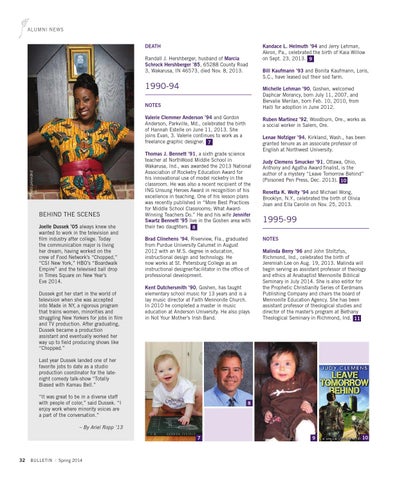 Joelle Dussek ’05 always knew she wanted to work in the television and film industry after college. Today the communication major is living her dream, having worked on the crew of Food Network’s “Chopped,” “CSI New York,” HBO’s “Boardwalk Empire” and the televised ball drop in Times Square on New Year’s Eve 2014. Dussek got her start in the world of television when she was accepted into Made in NY, a rigorous program that trains women, minorities and struggling New Yorkers for jobs in film and TV production. After graduating, Dussek became a production assistant and eventually worked her way up to field producing shows like “Chopped.”

Thomas J. Bennett ’91, a sixth grade science teacher at NorthWood Middle School in Wakarusa, Ind., was awarded the 2013 National Association of Rocketry Education Award for his innovational use of model rocketry in the classroom. He was also a recent recipient of the ING Unsung Heroes Award in recognition of his excellence in teaching. One of his lesson plans was recently published in “More Best Practices for Middle School Classrooms; What AwardWinning Teachers Do.” He and his wife Jennifer Swartz Bennett ’95 live in the Goshen area with their two daughters. 8 Brad Clinehens ’94, Riverview, Fla., graduated from Purdue University Calumet in August 2012 with an M.S. degree in education, instructional design and technology. He now works at St. Petersburg College as an instructional designer/facilitator in the office of professional development. Kent Dutchersmith ’90, Goshen, has taught elementary school music for 13 years and is a lay music director at Faith Mennonite Church. In 2010 he completed a master in music education at Anderson University. He also plays in Not Your Mother’s Irish Band.

1995-99 NOTES Malinda Berry ’96 and John Stoltzfus, Richmond, Ind., celebrated the birth of Jeremiah Lee on Aug. 19, 2013. Malinda will begin serving as assistant professor of theology and ethics at Anabaptist Mennonite Biblical Seminary in July 2014. She is also editor for the Prophetic Christianity Series of Eerdmans Publishing Company and chairs the board of Mennonite Education Agency. She has been assistant professor of theological studies and director of the master’s program at Bethany Theological Seminary in Richmond, Ind. 11

Last year Dussek landed one of her favorite jobs to date as a studio production coordinator for the latenight comedy talk-show “Totally Biased with Kamau Bell.” “It was great to be in a diverse staff with people of color,” said Dussek. “I enjoy work where minority voices are a part of the conversation.” 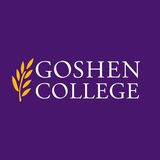