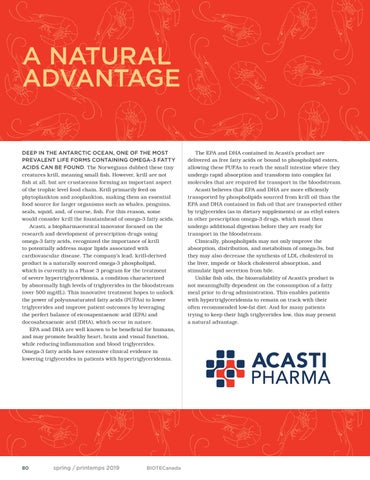 A NATURAL ADVANTAGE DEEP IN THE ANTARCTIC OCEAN, ONE OF THE MOST PREVALENT LIFE FORMS CONTAINING OMEGA-3 FATTY ACIDS CAN BE FOUND. The Norwegians dubbed these tiny creatures krill, meaning small fish. However, krill are not fish at all, but are crustaceans forming an important aspect of the trophic level food chain. Krill primarily feed on phytoplankton and zooplankton, making them an essential food source for larger organisms such as whales, penguins, seals, squid, and, of course, fish. For this reason, some would consider krill the fountainhead of omega-3 fatty acids. Acasti, a biopharmaceutical innovator focused on the research and development of prescription drugs using omega-3 fatty acids, recognized the importance of krill to potentially address major lipids associated with cardiovascular disease. The company’s lead, krill-derived product is a naturally sourced omega-3 phospholipid, which is currently in a Phase 3 program for the treatment of severe hypertriglyceridemia, a condition characterized by abnormally high levels of triglycerides in the bloodstream (over 500 mg/dL). This innovative treatment hopes to unlock the power of polyunsaturated fatty acids (PUFAs) to lower triglycerides and improve patient outcomes by leveraging the perfect balance of eicosapentaenoic acid (EPA) and docosahexaenoic acid (DHA), which occur in nature. EPA and DHA are well known to be beneficial for humans, and may promote healthy heart, brain and visual function, while reducing inflammation and blood triglycerides. Omega-3 fatty acids have extensive clinical evidence in lowering triglycerides in patients with hypertriglyceridemia.

The EPA and DHA contained in Acasti’s product are delivered as free fatty acids or bound to phospholipid esters, allowing these PUFAs to reach the small intestine where they undergo rapid absorption and transform into complex fat molecules that are required for transport in the bloodstream. Acasti believes that EPA and DHA are more efficiently transported by phospholipids sourced from krill oil than the EPA and DHA contained in fish oil that are transported either by triglycerides (as in dietary supplements) or as ethyl esters in other prescription omega-3 drugs, which must then undergo additional digestion before they are ready for transport in the bloodstream. Clinically, phospholipids may not only improve the absorption, distribution, and metabolism of omega-3s, but they may also decrease the synthesis of LDL cholesterol in the liver, impede or block cholesterol absorption, and stimulate lipid secretion from bile. Unlike fish oils, the bioavailability of Acasti’s product is not meaningfully dependent on the consumption of a fatty meal prior to drug administration. This enables patients with hypertriglyceridemia to remain on track with their often recommended low-fat diet. And for many patients trying to keep their high triglycerides low, this may present a natural advantage.