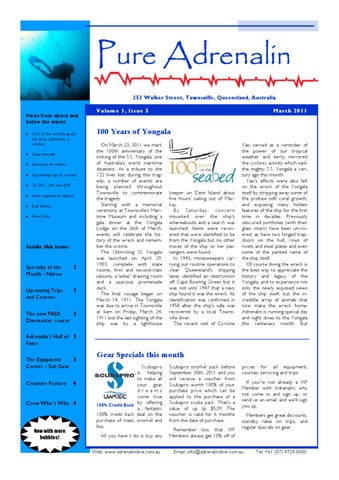 Specialty of the Month - Nitrox

100 Years of Yongala On March 23, 2011 we mark the 100th anniversary of the sinking of the S.S. Yongala, one of Australia’s worst maritime disasters. As a tribute to the 122 lives lost during this tragedy, a number of events are being planned throughout Townsville to commemorate the tragedy. Starting with a memorial ceremony at Townsville’s Maritime Museum and including a gala dinner at the Yongala Lodge on the 26th of March, events will celebrate the history of the wreck and remember the victims. The 106m-long SS Yongala was launched on April 29, 1903, complete with state rooms, first and second-class saloons, a ladies&#39; drawing room and a spacious promenade deck. The final voyage began on March 14, 1911. The Yongala was due to arrive in Townsville at 6am on Friday, March 24, 1911 but the last sighting of the ship was by a lighthouse

keeper on Dent Island about five hours&#39; sailing out of Mackay. By Saturday, concern mounted over the ship&#39;s whereabouts and a search was launched. Items were recovered that were identified to be from the Yongala but no other traces of the ship or her passengers were found. In 1943, minesweepers carrying out routine operations to clear Queensland&#39;s shipping lanes identified an obstruction off Cape Bowling Green but it was not until 1947 that a navy ship found it was the wreck. Its identification was confirmed in 1958 after the ship&#39;s safe was recovered by a local Townsville diver. The recent visit of Cyclone

Yasi served as a reminder of the power of our tropical weather and eerily mirrored the cyclonic activity which sank the mighty S.S. Yongala a century ago this month. Yasi’s effects were also felt on the wreck of the Yongala itself by stripping away some of the profuse soft coral growth, and exposing many hidden features of the ship for the first time in decades. Previously obscured portholes (with their glass intact) have been uncovered, as have two hinged trapdoors on the hull, rows of rivets and steel plates and even some of the painted name of the ship itself. Of course diving the wreck is the best way to appreciate the history and legacy of the Yongala, and to experience not only the newly exposed views of the ship itself, but the incredible array of animals that now make the wreck home. Adrenalin is running special day and night dives to the Yongala this centenary month. But

Gear Specials this month Scubapro is helping to make all your gear dreams come true by offering 100% Credit Back a fantastic Scubapro Nova torch 100% credit back deal on the purchase of mask, snorkel and fins. All you have t do is buy any Web: www.adrenalindive.com.au

Scubapro snorkel pack before September 30th, 2011 and you will receive a voucher from Scubapro worth 100% of your purchase price which can be applied to the purchase of a Scubapro scuba pack. That’s a value of up tp $529! The voucher is valid for 6 months from the date of purchase. Remember too, that VIP Members always get 10% off of

prices for all equipment, courses, servicing and trips. If you’re not already a VIP Member with Adrenalin, why not come in and sign up, or send us an email and we’ll sign you up. Members get great discounts, standby rates on trips, and regular specials on gear.

Specialty of the Month - Wreck Diver This month we’re offering our divers the chance to learn the benefits of diving on Enriched Air at a discounted price.

Enriched Air Nitrox, usually just called Nitrox, is PADI’s most popular specialty course. It’s easy to see why once you realize the benefits of diving on Nitrox.

Because Nitrogen is the factor in deciding decompression times, a lowered amount

of it in our breathing gas allows us to stay at certain depths for longer. It’s a fantastic way to dive the Yongala! The Nitrox course is conducted in only a few hours of home and classroom study, plus 2 dives on Nitrox. To book a course, or to find out more information about Enriched Air, or any of the other specialties we teach, give us a call, send us an email, or drop in for a chat.

• Mon, Wed &amp; Sat join us on a day trip to the historic wreck of the S.S. Yongala - Australia’s best dive!

in order to modernize and improve the program. One major change is that the number of dives needed to start the course has risen from 20 to 40. This ensures that divers are confident in their diving abilities and have more real-world experience. Divers still need at least 60 dives to complete the course. The emphasis in the course has moved from dive theory to more practical workshops in order to give candidates more real life experience in the activities and courses they will be certified to lead and teach upon certification.

The number of exams has dropped from 8 to just 1. Search &amp; Recovery and Deep dives are introduced as required skills to round out the DM’s experience. Theory can be done online or in class. The course is a comprehensive, modern proving ground for today’s dive pros. If you would like more information, please contact Andrew, our Training Director, and arrange for a one-on-one professional planning session or attend one of our regularly scheduled Go Pro night. Check our website and Facebook for dates.

Adrenalin Dive has always been the diver’s choice when it came to gear sales and servicing in the Townsville region. To continue that tradition, we’ve recently become the sole Sub Gear agent in the area. Sub Gear is the rebranded name of Seemann Sub, a longestablished manufacturer of affordable dive gear. Seeman Sub was purchased by the

parent company of Scubapro in an effort to offer extremely high quality, inexpensive dive gear to the market. Seemann has had a highly successful life in Germany since 1979, due to a focus on quality dive equipment at reasonable prices. The brand has continued to grow by creating feature-rich products, using high-quality manufacturing processes and implementing

competitive pricing in the market. Seemann has evolved into one of the worldwide leaders in the manufacturing of diving equipment, including gear for kids, gear for lifestyle diving and specialized products for female divers. SEEMANN products have received numerous awards. Come see the new Sub Gear today. You won’t believe the prices! And remember VIP Members get 10% off any gear in the shop. Membership is free.

It&#39;s a different world down there

The bull shark, Carcharhinus leucas, also known as Zambezi shark or unofficially known as Zambi in Africa and Nicaragua shark in Nicaragua, is a shark common worldwide in warm, shallow waters along coasts and in rivers. The bull shark lives all over the world in many different areas and travels long distances. It is common in coastal areas of warm oceans, in rivers and lakes, and occasionally salt and freshwater streams if they are deep enough. It is found to a depth of 150 metres but does not usually swim deeper than 30 metres. There are more than 500 bull

sharks in the Brisbane River; one was reportedly seen swimming the flooded streets of Brisbane, Queensland, Australia during the Queensland floods of late 2010/early 2011. Several were sighted in one of the main streets of Goodna, Queensland, Australia shortly after the peak of the January 2011 floods. Bull sharks are large and stout. Females are larger than males. The bull shark can grow up to 3.5m (11 ft 6in). It also can weigh up to 230 kg (505 lbs). Bull sharks are wider than other requiem sharks of comparable length, and are grey on top and white below. The second dorsal fin is smaller than the first. Most of a bull shark&#39;s diet consists of bony fish and smaller sharks, including other bull sharks. Bull sharks&#39; diets can also include turtles, birds, dolphins, terrestrial mammals, crustaceans, and echinoderms.

Bull sharks have been known to use the &quot;bump-and-bite&quot; technique to attack their prey.

Bull sharks are magnificent animals and one of the highlights of a dive on the S.S.Yongala. They tend to be shy, solitary animals and divers privileged enough to see one never forget it. Information courtesy of Wikipedia. Next month’s creature

Crew Who’s Who Nico is Adrenalin Dive’s head Trip Director, and keenest shark diver. If it’s got teeth and a big dorsal fin, Nico wants to be in the water with it! Hailing from Reunion Island in the Indian Ocean, off the coast of Madagascar, Nico has been living and diving in Australia for 3 years. Having worked down south before coming to Adrenalin last year, Nico has probably logged more dives on the world famous wreck of the

diver and has worked up and down the East coasts or Australia and Africa. Ask him about the bull sharks and the manta on Yonagala the next time you see him…. Favourite Dive: The SS Yongala wreck Nicolas Stefanini

S.S. Yongala than you’ve had hot dinners. In addition to being both a CMAS and PADI Instructor, Nico is also a commercial

Favourite Creature: Sharks (Bulls and Tigers) Why Dive? I just like being in the water

Pure Adrenalin is published and distributed in conjunction with Adrenalin Snorkel &amp; Dive. All contents are copyrighted and cannot be reproduced without express permission. If you wish to stop receiving this monthly letter, please send an email to info@adrenalindive.com.au Web: www.adrenalindive.com.au 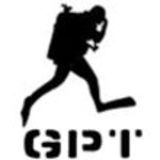