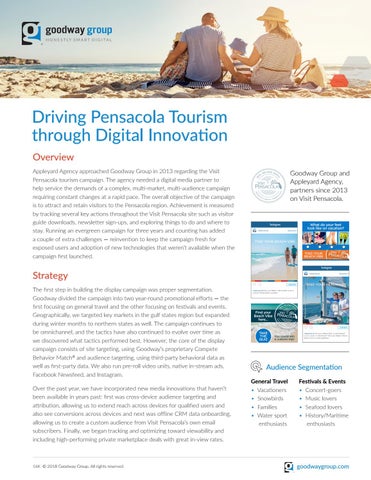 Driving Pensacola Tourism through Digital Innovation Overview Appleyard Agency approached Goodway Group in 2013 regarding the Visit Pensacola tourism campaign. The agency needed a digital media partner to help service the demands of a complex, multi-market, multi-audience campaign requiring constant changes at a rapid pace. The overall objective of the campaign is to attract and retain visitors to the Pensacola region. Achievement is measured by tracking several key actions throughout the Visit Pensacola site such as visitor guide downloads, newsletter sign-ups, and exploring things to do and where to stay. Running an evergreen campaign for three years and counting has added a couple of extra challenges ­— reinvention to keep the campaign fresh for exposed users and adoption of new technologies that weren’t available when the campaign first launched.

Goodway Group and Appleyard Agency, partners since 2013 on Visit Pensacola.

Strategy The first step in building the display campaign was proper segmentation. Goodway divided the campaign into two year-round promotional efforts — the first focusing on general travel and the other focusing on festivals and events. Geographically, we targeted key markets in the gulf states region but expanded during winter months to northern states as well. The campaign continues to be omnichannel, and the tactics have also continued to evolve over time as we discovered what tactics performed best. However, the core of the display campaign consists of site targeting, using Goodway’s proprietary Compete Behavior Match® and audience targeting, using third-party behavioral data as well as first-party data. We also run pre-roll video units, native in-stream ads, Facebook Newsfeed, and Instagram. Over the past year, we have incorporated new media innovations that haven’t been available in years past: first was cross-device audience targeting and attribution, allowing us to extend reach across devices for qualified users and also see conversions across devices and next was offline CRM data onboarding, allowing us to create a custom audience from Visit Pensacola’s own email subscribers. Finally, we began tracking and optimizing toward viewability and including high-performing private marketplace deals with great in-view rates.

“Goodway Group has one of the highest conversion rates when tracking online ad exposure to in-person visits to Pensacola.” — Dick Appleyard, President of Appleyard Agency

Success The past 12 months have been very successful for Visit Pensacola tourism. Goodway’s display campaigns have driven nearly 80,000 site activities, with an eCPA that came in at 8% under the benchmark goal. For cross-device, we managed frequency at the user level and reached 25%+ of users on two or more devices and 12%+ on three devices. Pre-roll completion rates are 11% over goal on average, and we’ve expanded paid social media channels as we have optimized multiple versions of creative and messaging. Media optimization success is translating into real-world results as well. The Pensacola region has experienced a tourism boom, according to its annual study released on May 2, 2016. Many key tourism spending indicators rose, including visitor spending — up 26% from $674.4 million to $849 million — and average length of stay, which rose to 8.5 nights from 7.9.

Goodway Group is the programmatic partner agencies and advertisers trust to drive campaign performance and media efficiency. Proud to be completely independently owned and operated, Goodway provides programmatic expertise that meets its clients’ needs — and no one else’s. Through managed planning and buying services across all paid digital media, Goodway delivers trustworthy marketing expertise and authentic results because Goodway knows the truth is what matters most. Goodway Group. Honestly Smart Digital.

For more information on Goodway Group’s innovative media strategies, contact us at info@goodwaygroup.com. 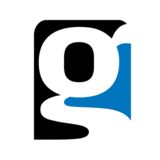