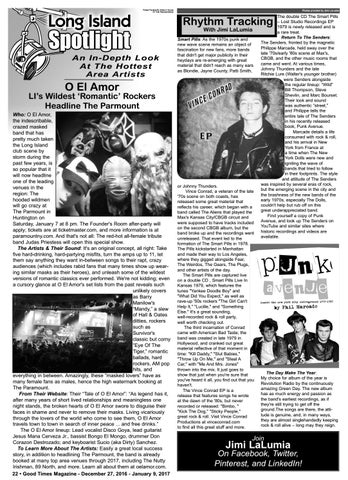 Photos Provided By Artists & Venues Or Their Representatives

An In-Depth Look At The Hottest Area Artists

Smart Pills: As the 1970s punk and new wave scene remains an object of fascination for new fans, more bands that didn't get major publicity in their heydays are re-emerging with great material that didn't reach as many ears as Blondie, Jayne County, Patti Smith,

Who: O El Amor, the indescribable, crazed masked band that has pretty much taken the Long Island club scene by storm during the past few years, is so popular that it will now headline one of the leading venues in the region: The hooded wildmen will go crazy at The Parmount in Huntington on Saturday, January 7 at 8 pm. The Founder's Room after-party will apply; tickets are at ticketmaster.com, and more information is at paramountny.com. And that's not all: The red-hot all-female tribute band Judas Priestess will open this special show. The Artists & Their Sound: It's an original concept, all right: Take five hard-drinking, hard-partying misfits, turn the amps up to 11, let them say anything they want in-between songs to their rapt, crazy audiences (which includes rabid fans that many times show up wearing similar masks as their heroes), and unleash some of the wildest versions of romantic classics ever performed. We're not kidding; even a cursory glance at O El Amor's set lists from the past reveals such unlikely covers as Barry Manilow's “Mandy,” a slew of Hall & Oates ditties, rockers such as Survivor's classic but corny “Eye Of The Tiger,” romantic ballads, hard rockers, AM pop hits, and everything in between. Amazingly, these “masked lovers” have as many female fans as males, hence the high watermark booking at The Paramount. From Their Website: Their “Tale of O El Amor”: “As legend has it, after many years of short lived relationships and meaningless one night stands, the broken hearts of O El Amor swore to disguise their faces in shame and never to remove their masks. Living vicariously through the lovers of the world who come to see them, O El Amor travels town to town in search of inner peace ... and free drinks.” The O El Amor lineup: Lead vocalist Disco Goya, lead guitarist Jesus Mana Cerveza Jr., bassist Bongo El Mongo, drummer Don Corazon Destrozado; and keyboarist Sucio (aka Dirty) Sanchez. To Learn More About The Artists: Easily a great local success story, in addition to headlining The Parmount, the band is already booked at many top area venues through 2017, including The Nutty Irishman, 89 North, and more. Learn all about them at oelamor.com. 22 • Good Times Magazine - December 27, 2016 - January 9, 2017

or Johnny Thunders. Vince Conrad, a veteran of the late '70s scene on both coasts, has released some great material that reflects his career, which began with a band called The Aliens that played the Max's Kansas City/CBGB circuit and were supposed to have tracks included on the second CBGB album, but the band broke up and the recordings went unreleased. That event led to the formation of The Smart Pills in 1978. The Pills kickstarted in Manhattan and made their way to Los Angeles, where they gigged alongside Fear, The Weirdos, The Gears, The Plugs, and other artists of the day. The Smart Pills are captured live on a double CD , Smart Pills Live In Kansas 1979, which features the tunes "Yankee Doodle Boy" and "What Did You Expect," as well as rave-up '50s rockers "The Girl Can't Help It," "Lucille," and "Something Else." It's a great sounding, well-recorded rock & roll party, well worth checking out. The third incarnation of Conrad came with American Bad Taste; the band was created in late 1979 in Hollywood, and cranked out great material reflective of that moment in time: "Kill Daddy," "Slut Babies," "Throw Up On Me," and "Steal A Car," with "Me And Mrs. Jones" thrown into the mix. It just goes to show that just when you're sure that you've heard it all, you find out that you haven't. The Vince Conrad EP is a release that features songs he wrote at the dawn of the '80s, but never recorded or released: "Bimbo, " "Kick The Dog," "Sticky People," great rock & roll. Visit Vince Conrad Productions at vinceconrad.com to find all this great stuff and more.

The double CD The Smart Pills – Lost Studio Recordings EP 1979 is newly released and is a rare treat. Return To The Senders: The Senders, fronted by the magnetic Philippe Marcade, held sway over the late '70s/early '80s scene at Max's, CBGB, and the other music rooms that came and went. At various times, Johnny Thunders and the late Ritchie Lure (Walter's younger brother) were Senders alongside the regular lineup: “Wild” Bill Thompson, Steve Shevlin, and Marc Bourset. Their look and sound was authentic “street,” and Philippe tells the entire tale of The Senders in his recently released book, Punk Avenue. Marcade details a life consumed with rock & roll, and his arrival in New York from France at a time when The New York Dolls were new and igniting the wave of bands that tried to follow in their footprints. The style and attitude of The Senders was inspired by several eras of rock, but the emerging scene in the city and the brashness of the new bands of the early 1970s, especially The Dolls, couldn't help but rub off on this great underappreciated band. Find yourself a copy of Punk Avenue, and look up The Senders on YouTube and similar sites where historic recordings and videos are available.

The Day Make The Year: My choice for album of the year is Revolution Radio by the continuously amazing Green Day. The new album has as much energy and passion as the band's earliest recordings, as if they're still trying to get off the ground.The songs are there, the attitude is genuine, and, in many ways, they are almost singlehandedly keeping rock & roll alive – long may they reign. 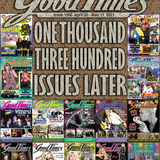 Have a wacky New Year with O El Amor in Huntington ... Big shows on the horizon from Jack's Waterfall, the all-woman Judas Priest tribute Ju...

Have a wacky New Year with O El Amor in Huntington ... Big shows on the horizon from Jack's Waterfall, the all-woman Judas Priest tribute Ju...