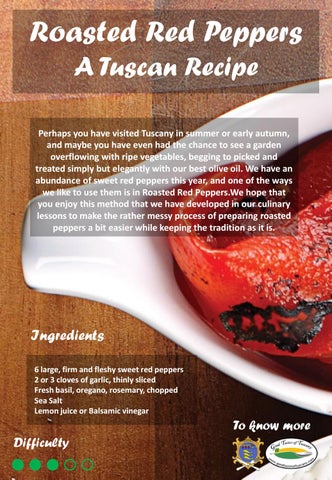 Roasted Red Peppers A Tuscan Recipe Perhaps you have visited Tuscany in summer or early autumn, and maybe you have even had the chance to see a garden overflowing with ripe vegetables, begging to picked and treated simply but elegantly with our best olive oil. We have an abundance of sweet red peppers this year, and one of the ways we like to use them is in Roasted Red Peppers.We hope that you enjoy this method that we have developed in our culinary lessons to make the rather messy process of preparing roasted peppers a bit easier while keeping the tradition as it is.

Place the peppers on a charcoal, gas or electric grill, over medium-high heat. Watching them carefully, try to singe as much of the skin of the pepper as possible. I like to see a lot of black areas, but it is important not to overcook the outsides, or there won&#39;t be any juice or even enough meat to make this worthwhile. As each pepper becomes blackened, remove to a bowl or casserole with a fitted lid, large enough to hold all six peppers. Keep the lid on the grilled peppers at all times, because it is the steam that collects under the lid that helps to loosen the skin from the vegetables. After all the peppers are in the covered container, let them cool until they are easy to touch. This usually takes about an hour. I have tried to rush this process, but since skinning the peppers requires so much handling, it is best to let them cool completely. Now, here is where my own method may help you. If you have removed the skin from roasted peppers before, you know that this can be a filthy job, and one that takes a lot of time. Place a wire mesh strainer over a medium sized bowl. With the bowl of roasted peppers beside the fresh bowl, carefully lift one pepper over the strainer. Holding the stem of the pepper, peel downward over the strainer, letting the peeled skin fall into the strainer, and catching any juices in the bowl below. As each pepper is peeled, and while still holding it over the strainer, use a small paring knife to remove the top, taking all the seeds along with the &quot;hat&quot; of the pepper. Place the pepper on a cutting board and slice it into whatever size pieces you prefer. When all the peppers are peeled, you should have an inch or so of juices in the bottom of the bowl. If there are juices in the original steaming bowl, you can now strain them into the clean juices. I have tried several methods for skinning the blackened peppers and capturing their delicious juices, but this one seems to be the best. At this point, I add the peppers, and whatever dressings I chose. This year, it is thinly sliced garlic, sea salt, and freshly chopped basil, oregano and rosemary from the garden. Add a little acid, such as a good squirt of fresh lemon juice, or a teaspoon of balsamic vinegar. I then pour on a very generous amount of good Tuscan Extra Virgin Olive Oil. Marinate the peppers overnight, and then enjoy. These are delicious. 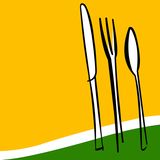