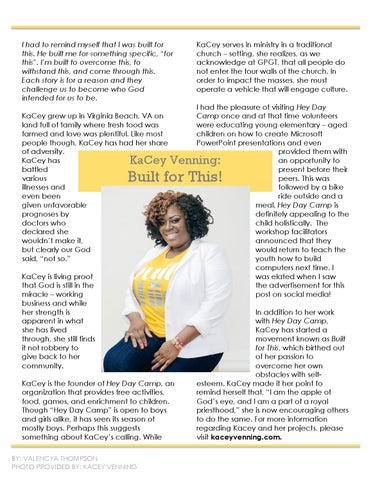 I had to remind myself that I was built for this. He built me for something specific, “for this”. I’m built to overcome this, to withstand this, and come through this. Each story is for a reason and they challenge us to become who God intended for us to be. KaCey grew up in Virginia Beach, VA on land full of family where fresh food was farmed and love was plentiful. Like most people though, KaCey has had her share of adversity. KaCey has battled various illnesses and even been given unfavorable prognoses by doctors who declared she wouldn’t make it, but clearly our God said, “not so.”

KaCey serves in ministry in a traditional church – setting, she realizes, as we acknowledge at GPGT, that all people do not enter the four walls of the church. In order to impact the masses, she must operate a vehicle that will engage culture. I had the pleasure of visiting Hey Day Camp once and at that time volunteers were educating young elementary – aged children on how to create Microsoft PowerPoint presentations and even provided them with an opportunity to present before their peers. This was followed by a bike ride outside and a meal. Hey Day Camp is definitely appealing to the child holistically. The workshop facilitators announced that they would return to teach the youth how to build computers next time. I was elated when I saw the advertisement for this post on social media!

KaCey is living proof that God is still in the miracle – working business and while her strength is apparent in what she has lived through, she still finds it not robbery to give back to her community. KaCey is the founder of Hey Day Camp, an organization that provides free activities, food, games, and enrichment to children. Though “Hey Day Camp” is open to boys and girls alike, it has seen its season of mostly boys. Perhaps this suggests something about KaCey’s calling. While BY: VALENCYA THOMPSON PHOTO PROVIDED BY: KACEY VENNING

In addition to her work with Hey Day Camp, KaCey has started a movement known as Built for This, which birthed out of her passion to overcome her own obstacles with selfesteem. KaCey made it her point to remind herself that, “I am the apple of God’s eye, and I am a part of a royal priesthood,” she is now encouraging others to do the same. For more information regarding Kacey and her projects, please visit kaceyvenning.com. 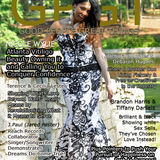