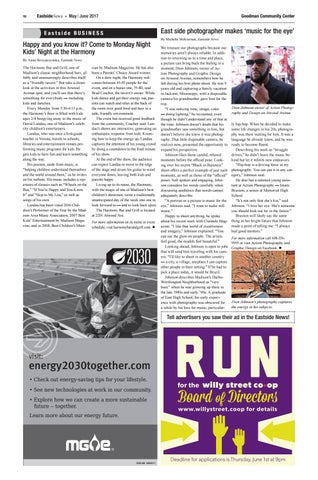 East side photographer makes ‘music for the eye’

Happy and you know it? Come to Monday Night Kids’ Night at the Harmony By Anna Skrzypczynska, Eastside News

The Harmony Bar and Grill, one of Madison’s classic neighborhood bars, affably and unassumingly describes itself as a “friendly tavern.” But take a closer look at the activities in this Atwood Avenue spot, and you’ll see that there’s something for everybody — including kids and families. Every Monday from 5:30-6:15 p.m., the Harmony’s floor is filled with kids ages 2-8 boogying away to the music of David Landau, one of Madison’s celebrity children’s entertainers. Landau, who was once a first-grade teacher in Verona, travels to schools, libraries and entertainment venues performing music programs for kids. He gets kids to have fun and learn something along the way. His passion, aside from music, is “helping children understand themselves and the world around them,” as he writes on his website. His music includes a repertoire of classics such as “Wheels on the Bus,” “If You’re Happy and You Know It” and “Skip to My Lou,” as well as songs of his own. Landau has been voted 2016 Children’s Performer of the Year by the Madison Area Music Association, 2007 Best Kids’ Entertainment by Madison Magazine, and in 2008, Best Children’s Musi-

cian by Madison Magazine. He has also been a Parents’ Choice Award winner. On a slow night, the Harmony welcomes between 45-50 people for the event, and on a busier one, 75-80, said Brad Czachor, the tavern’s owner. While kids dance and get their energy out, parents can watch and relax at the back of the room over good food and beer in a safe, friendly environment. The event has received good feedback from the community, Czachor said. Landau’s shows are interactive, generating an enthusiastic response from kids. Knowing how to keep the energy up, Landau captures the attention of his young crowd by doing a countdown to the final minute of his show. At the end of the show, the audience can expect Landau to move to the edge of the stage and strum his guitar to wind everyone down, leaving both kids and parents happy. Living up to its name, the Harmony, with the magic of one of Madison’s best children’s showmen, turns a traditionally unanticipated day of the week into one to look forward to — and to look back upon. The Harmony Bar and Grill is located at 2201 Atwood Ave. For more information on its menu or event schedule, visit harmonybarandgrill.com. l

We treasure our photographs because our memories aren’t always reliable. In addition to returning us to a time and place, a picture can bring back the feeling in a moment. Dion Johnson, owner of Action Photography and Graphic Design on Atwood Avenue, remembers how he felt during his first photo shoot. He was 9 years old and capturing a family vacation in Jackson, Mississippi, with a disposable camera his grandmother gave him for the trip. “I was noticing time, image, color — doing lighting,” he recounted, even though he didn’t understand any of that at the time. Johnson doesn’t doubt that his grandmother saw something in him, but doesn’t believe she knew it was photography. That little disposable camera, he realizes now, presented the opportunity to expand his perspective. Johnson likes those candid, relaxed moments before the official pose. Looking over his recent “Black in Business” shoot offers a perfect example of just such moments, as well as those of the “official” poses. Soft spoken and engaging, Johnson considers his words carefully when discussing aesthetics that words cannot adequately describe. “A portrait or a picture is music for the eye,” Johnson said. “I want to make still music.” Happy to shoot anything, he spoke about his recent work with Clientele Magazine. “I like that world of creativeness and imagery,” Johnson explained. “You can see the glow on people. The artists feel good, the models feel beautiful.” Looking ahead, Johnson is open to jobs that will send him traveling with his camera. “I’d like to shoot in another country — a city, a village, anyplace I can capture other people in their setting.” If he had to pick a place today, it would be Brazil. Johnson describes Madison’s DarboWorthington Neighborhood as “very busy” when he was growing up there in the late 1980s and early ’90s. A graduate of East High School, his early experience with photography was obscured for a while by his love for music, particular-

Dion Johnson owner of Action Photography and Design on Atwood Avenue. ly hip-hop. When he decided to make some life changes in his 20s, photography was there waiting for him. It was a language he already knew, and he was ready to become fluent. Describing his work as “struggle driven,” he didn’t leave the music behind but let it inform new endeavors. “Hip-hop is a driving force in my photography. You can put it in any category,” Johnson said. He also has a talented young assistant at Action Photography — Imani Braxton, a senior at Memorial High School. “It’s not only that she’s kin,” said Johnson. “I love her eye. She’s someone you should look out for in the future.” Braxton will likely say the same thing in her bright future that Johnson made a point of telling me: “I always had good mentors.” For more information call 608-5569995 or visit Action Photography and Graphic Design on Facebook. l

Dion Johnson’s photography captures the energy in his subjects.

Tell advertisers you saw their ad in the Eastside News!

energy2030together.com • Check out energy-saving tips for your lifestyle. • See new technologies at work in our community. • Explore how we can create a more sustainable future -- together. Learn more about our energy future.

Deadline for applications is Thursday, June 1st at 9pm The Eastside News (ESN) newspaper is published six times a year by the Goodman Community Center. We publish news and information about event...

The Eastside News (ESN) newspaper is published six times a year by the Goodman Community Center. We publish news and information about event...