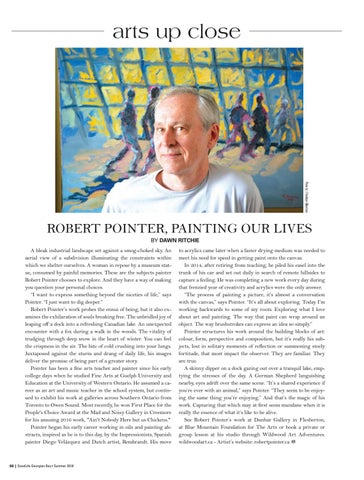 ROBERT POINTER, PAINTING OUR LIVES BY DAWN RITCHIE A bleak industrial landscape set against a smog-choked sky. An aerial view of a subdivision illuminating the constraints within which we shelter ourselves. A woman in repose by a museum statue, consumed by painful memories. These are the subjects painter Robert Pointer chooses to explore. And they have a way of making you question your personal choices. “I want to express something beyond the niceties of life,” says Pointer. “I just want to dig deeper.” Robert Pointer’s work probes the ennui of being, but it also examines the exhilaration of souls breaking free. The unbridled joy of leaping off a dock into a refreshing Canadian lake. An unexpected encounter with a fox during a walk in the woods. The vitality of trudging through deep snow in the heart of winter. You can feel the crispness in the air. The bite of cold crushing into your lungs. Juxtaposed against the sturm and drang of daily life, his images deliver the promise of being part of a greater story. Pointer has been a fine arts teacher and painter since his early college days when he studied Fine Arts at Guelph University and Education at the University of Western Ontario. He assumed a career as an art and music teacher in the school system, but continued to exhibit his work at galleries across Southern Ontario from Toronto to Owen Sound. Most recently, he won First Place for the People&#39;s Choice Award at the Mad and Noisy Gallery in Creemore for his amusing 2016 work, &quot;Ain&#39;t Nobody Here but us Chickens.&quot; Pointer began his early career working in oils and painting abstracts, inspired as he is to this day, by the Impressionists, Spanish painter Diego Velázquez and Dutch artist, Rembrandt. His move

to acrylics came later when a faster drying medium was needed to meet his need for speed in getting paint onto the canvas. In 2014, after retiring from teaching, he piled his easel into the trunk of his car and set out daily in search of remote hillsides to capture a feeling. He was completing a new work every day during that frenzied year of creativity and acrylics were the only answer. “The process of painting a picture, it’s almost a conversation with the canvas,” says Pointer. “It’s all about exploring. Today I’m working backwards to some of my roots. Exploring what I love about art and painting. The way that paint can wrap around an object. The way brushstrokes can express an idea so simply.” Pointer structures his work around the building blocks of art: colour, form, perspective and composition, but it’s really his subjects, lost in solitary moments of reflection or summoning steely fortitude, that most impact the observer. They are familiar. They are true. A skinny dipper on a dock gazing out over a tranquil lake, emptying the stresses of the day. A German Shepherd languishing nearby, eyes adrift over the same scene. “It’s a shared experience if you’re ever with an animal,” says Pointer. “They seem to be enjoying the same thing you’re enjoying.” And that’s the magic of his work. Capturing that which may at first seem mundane when it is really the essence of what it’s like to be alive. See Robert Pointer’s work at Dunbar Gallery in Flesherton, at Blue Mountain Foundation for The Arts or book a private or group lesson at his studio through Wildwood Art Adventures. wildwoodart.ca - Artist’s website: robertpointer.ca 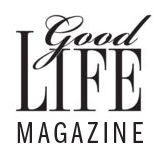