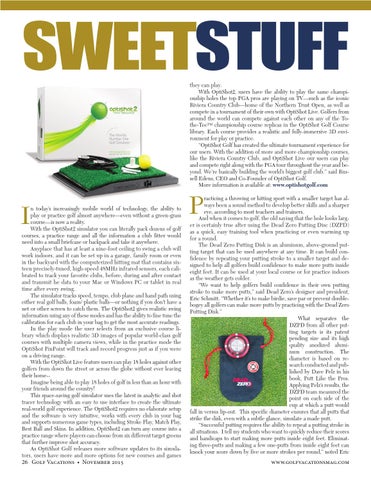 they can play. With OptiShot2, users have the ability to play the same championship holes the top PGA pros are playing on TV—such as the iconic Riviera Country Club—home of the Northern Trust Open, as well as compete in a tournament of their own with OptiShot Live. Golfers from around the world can compete against each other on any of the Tothe-Tee™ championship course replicas in the OptiShot Golf Course library. Each course provides a realistic and fully-immersive 3D environment for play or practice. “OptiShot Golf has created the ultimate tournament experience for our users. With the addition of more and more championship courses, like the Riviera Country Club, and OptiShot Live our users can play and compete right along with the PGA tour throughout the year and beyond. We’re basically building the world’s biggest golf club.” said Russell Edens, CEO and Co-Founder of OptiShot Golf. More information is available at: www.optishotgolf.com

n today’s increasingly mobile world of technology, the ability to play or practice golf almost anywhere—even without a green-grass course—is now a reality. With the OptiShot2 simulator you can literally pack dozens of golf courses, a practice range and all the information a club fitter would need into a small briefcase or backpack and take it anywhere. Anyplace that has at least a nine-foot ceiling to swing a club will work indoors, and it can be set up in a garage, family room or even in the backyard with the computerized hitting mat that contains sixteen precisely-tuned, high-speed 48MHz infrared sensors, each calibrated to track your favorite clubs, before, during and after contact and transmit he data to your Mac or Windows PC or tablet in real time after every swing. The simulator tracks speed, tempo, club plane and hand path using either real golf balls, foam/ plastic balls—or nothing if you don’t have a net or other screen to catch them. The OptiShot2 gives realistic swing information using any of these modes and has the ability to fine tune the calibration for each club in your bag to get the most accurate readings. In the play mode the user selects from an exclusive course library which displays realistic 3D images of popular world-class golf courses with multiple camera views, while in the practice mode the OptiShot PinPoint will track and record progress just as if you were on a driving range. With the OptiShot Live feature users can play 18 holes against other golfers from down the street or across the globe without ever leaving their home-Imagine being able to play 18 holes of golf in less than an hour with your friends around the country! This space-saving golf simulator uses the latest in analytic and shot tracer technology with an easy to use interface to create the ultimate real-world golf experience. The OptiShot2 requires no elaborate setup and the software is very intuitive, works with every club in your bag and supports numerous game types, including Stroke Play, Match Play, Best Ball and Skins. In addition, OptiShot2 can turn any course into a practice range where players can choose from six different target greens that further improve shot accuracy. As OptiShot Golf releases more software updates to its simulators, users have more and more options for new courses and games

racticing a throwing or hitting sport with a smaller target has always been a sound method to develop better skills and a sharper eye, according to most teachers and trainers. And when it comes to golf, the old saying that the hole looks larger is certainly true after using the Dead Zero Putting Disc (DZPD) as a quick, easy training tool when practicing or even warming up for a round. The Dead Zero Putting Disk is an aluminum, above-ground putting target that can be used anywhere at any time. It can build confidence by repeating your putting stroke to a smaller target and designed to help all golfers build confidence to make more putts inside eight feet. It can be used at your local course or for practice indoors as the weather gets colder. “We want to help golfers build confidence in their own putting stroke to make more putts,” said Dead Zero’s designer and president, Eric Schmitt. “Whether it’s to make birdie, save par or prevent doublebogey all golfers can make more putts by practicing with the Dead Zero Putting Disk.” What separates the DZPD from all other putting targets is its patent pending size and its high quality anodized aluminum construction. The diameter is based on research conducted and published by Dave Pelz in his book, Putt Like the Pros. Applying Pelz’s results, the DZPD team measured the point on each side of the cup at which a putt would fall in versus lip-out. This specific diameter ensures that all putts that strike the disk, even with a subtle glance, simulate a made putt. “Successful putting requires the ability to repeat a putting stroke in all situations. I tell my students who want to quickly reduce their scores and handicaps to start making more putts inside eight feet. Eliminating three-putts and making a few one-putts from inside eight feet can knock your score down by five or more strokes per round,” noted Eric 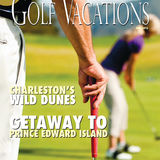