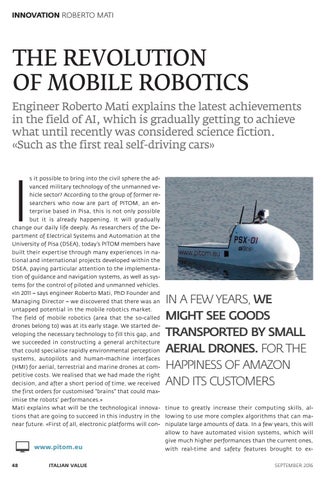 THE REVOLUTION OF MOBILE ROBOTICS Engineer Roberto Mati explains the latest achievements in the field of AI, which is gradually getting to achieve what until recently was considered science fiction. «Such as the first real self-driving cars»

s it possible to bring into the civil sphere the advanced military technology of the unmanned vehicle sector? According to the group of former researchers who now are part of PITOM, an enterprise based in Pisa, this is not only possible but it is already happening. It will gradually change our daily life deeply. As researchers of the Department of Electrical Systems and Automation at the University of Pisa (DSEA), today’s PITOM members have built their expertise through many experiences in national and international projects developed within the DSEA, paying particular attention to the implementation of guidance and navigation systems, as well as systems for the control of piloted and unmanned vehicles. «In 2011 – says engineer Roberto Mati, PhD Founder and Managing Director – we discovered that there was an untapped potential in the mobile robotics market. The field of mobile robotics (area that the so-called drones belong to) was at its early stage. We started developing the necessary technology to fill this gap, and we succeeded in constructing a general architecture that could specialise rapidly environmental perception systems, autopilots and human-machine interfaces (HMI) for aerial, terrestrial and marine drones at competitive costs. We realised that we had made the right decision, and after a short period of time, we received the first orders for customised &quot;brains&quot; that could maximise the robots&#39; performances.» Mati explains what will be the technological innova- tinue to greatly increase their computing skills, altions that are going to succeed in this industry in the lowing to use more complex algorithms that can manear future. «First of all, electronic platforms will con- nipulate large amounts of data. In a few years, this will allow to have automated vision systems, which will give much higher performances than the current ones, www.pitom.eu with real-time and safety features brought to ex-

IN A FEW YEARS, WE MIGHT SEE GOODS TRANSPORTED BY SMALL AERIAL DRONES. FOR THE HAPPINESS OF AMAZON AND ITS CUSTOMERS