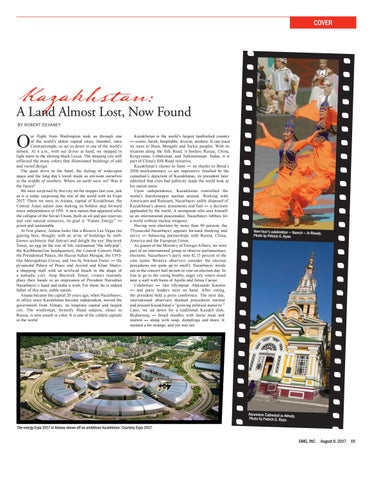 ur flight from Washington took us through one of the world’s oldest capital cities, Istanbul, once Constantinople, to set us down in one of the world’s newest. At 4 a.m., with our driver at hand, we stepped in light snow to the shining black Lexus. The sleeping city still reflected the many colors that illuminated buildings of odd and varied design. The quiet drive to the hotel, the feeling of wide-open space and the long day’s travel made us envision ourselves in the middle of nowhere. Where on earth were we? Was it the future? We were surprised by this city on the steppes last year, just as it is today surprising the rest of the world with its Expo 2017. There we were in Astana, capital of Kazakhstan, the Central Asian nation now making its boldest step forward since independence in 1991. A new nation that appeared after the collapse of the Soviet Union, built on oil and gas reserves and vast natural resources, its goal is “Future Energy” — green and sustainable. At first glance, Astana looks like a Bizarro Las Vegas (no gaming here, though), with an array of buildings by wellknown architects that distract and delight the eye: Bayterek Tower, an egg on the tree of life, nicknamed “the lollypop”; the KazMunayGas headquarters; the Central Concert Hall; the Presidential Palace; the Hazrat Sultan Mosque; the UFOlike Metropolitan Circus; and two by Norman Foster — the pyramidal Palace of Peace and Accord and Khan Shatyr, a shopping mall with an artificial beach in the shape of a nomadic yurt. Atop Bayterek Tower, visitors routinely place their hands in an impression of President Nursultan Nazarbayev’s hand and make a wish. For them, he is indeed father of this new, stable nation. Astana became the capital 20 years ago, when Nazarbayev, in office since Kazakhstan become independent, moved the government from Almaty, its longtime capital and largest city. The windswept, formerly bland outpost, closer to Russia, is now awash in color. It is one of the coldest capitals in the world.

Kazakhstan is the world’s largest landlocked country — exotic, harsh, hospitable, diverse, modern. It can trace its roots to Huns, Mongols and Turkic peoples. With its location along the Silk Road, it borders Russia, China, Kyrgyzstan, Uzbekistan, and Turkmenistan. Today, it is part of China’s Silk Road initiative. Kazakhstan’s claims to fame — no thanks to Borat’s 2006 mockumentary — are impressive. Insulted by the comedian’s depiction of Kazakhstan, its president later admitted that even bad publicity made the world look at his nation anew. Upon independence, Kazakhstan controlled the world’s fourth-largest nuclear arsenal. Working with Americans and Russians, Nazarbayev safely disposed of Kazakhstan’s atomic armaments and fuel — a decision applauded by the world. A strongman who sees himself as an international peacemaker, Nazarbayev lobbies for a world without nuclear weapons. Having won elections by more than 90 percent, the 77-year-old Nazarbayev appears forward thinking and savvy — balancing partnerships with Russia, China, America and the European Union. As guests of the Ministry of Foreign Affairs, we were part of an international group to observe parliamentary elections. Nazarbayev’s party won 82.15 percent of the vote (some Western observers consider the election procedures not quite up to snuff). Nazarbayev strode out in the concert hall atrium to vote on election day. In line to go to the voting booths, eager city voters stood near a wall with busts of Apollo and Julius Caesar. Celebrities — like Olympian Aleksandr Karelin — and party leaders were on hand. After voting, the president held a press conference. The next day, international observers deemed procedures normal and praised Kazakhstan’s “growing political maturity.” Later, we sat down for a traditional Kazakh dish, Beşbarmaq — broad noodles with horse meat and mutton — along with soup, dumplings and more. It seemed a bit strange, and yet was not.

The energy Expo 2017 in Astana shows off an ambitious Kazakhstan. Courtesy Expo 2017. 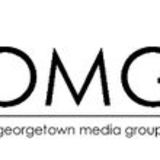 In our travel special, we move from Liverpool to Kazakhstan, with advice on travel apps and road trips to see the solar eclipse. News on Cap...

In our travel special, we move from Liverpool to Kazakhstan, with advice on travel apps and road trips to see the solar eclipse. News on Cap...