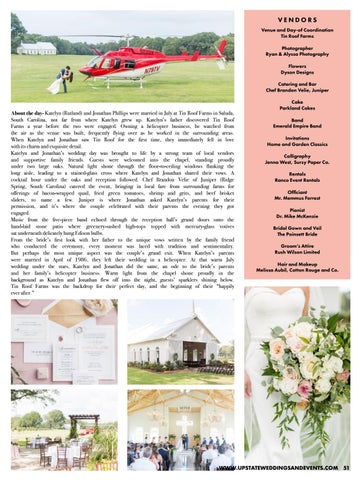 About the day- Katelyn (Rutland) and Jonathan Phillips were married in July at Tin Roof Farms in Saluda, South Carolina, not far from where Katelyn grew up. Katelyn’s father discovered Tin Roof Farms a year before the two were engaged. Owning a helicopter business, he watched from the air as the venue was built, frequently flying over as he worked in the surrounding areas. When Katelyn and Jonathan saw Tin Roof for the first time, they immediately fell in love with its charm and exquisite detail. Katelyn and Jonathan’s wedding day was brought to life by a strong team of local vendors and supportive family friends. Guests were welcomed into the chapel, standing proudly under two large oaks. Natural light shone through the floor-to-ceiling windows flanking the long aisle, leading to a stained-glass cross where Katelyn and Jonathan shared their vows. A cocktail hour under the oaks and reception followed. Chef Brandon Velie of Juniper (Ridge Spring, South Carolina) catered the event, bringing in local fare from surrounding farms for offerings of bacon-wrapped quail, fried green tomatoes, shrimp and grits, and beef brisket sliders, to name a few. Juniper is where Jonathan asked Katelyn’s parents for their permission, and it’s where the couple celebrated with their parents the evening they got engaged. Music from the five-piece band echoed through the reception hall’s grand doors onto the hand-laid stone patio where greenery-sashed high-tops topped with mercury-glass votives sat underneath delicately hung Edison bulbs. From the bride’s first look with her father to the unique vows written by the family friend who conducted the ceremony, every moment was laced with tradition and sentimentality. But perhaps the most unique aspect was the couple’s grand exit. When Katelyn’s parents were married in April of 1986, they left their wedding in a helicopter. At that warm July wedding under the stars, Katelyn and Jonathan did the same, an ode to the bride’s parents and her family’s helicopter business. Warm light from the chapel shone proudly in the background as Katelyn and Jonathan flew off into the night, guests’ sparklers shining below. Tin Roof Farms was the backdrop for their perfect day, and the beginning of their “happily ever after.” Upstate South Carolina's wedding magazine since 1993. The publication is full of vision, wisdom and inspiring looks to help you plan your dr...

Upstate South Carolina's wedding magazine since 1993. The publication is full of vision, wisdom and inspiring looks to help you plan your dr...