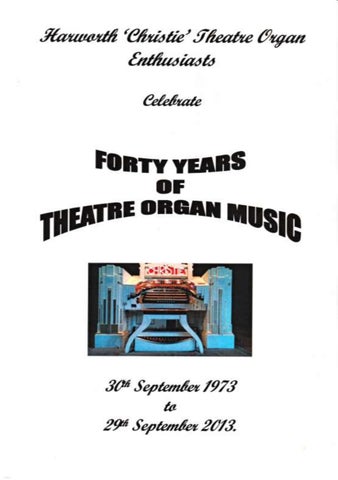 My, itâ&#x20AC;&#x2122;s a long way from Durham to Harworth Reg Simpkins, Ted Aistrup and Ken Mason pictured holding some of the pipework in front of the old, now demolished, No.1 headgear at the colliery.

The Harworth â&#x20AC;&#x2DC;Christieâ&#x20AC;&#x2122; Theatre Organ Enthusiasts The society that we now know as the H.C.O.E. was formed in late 1971 and the first concert was held in the Institute concert room on 28th December that year. Probably not an ideal situation between Christmas and the New Year period, but nevertheless over 100 people attended that first concert, using the Hammond RT3 electronic, the organist being the very well respected Hammond organist Hubert Selby, together with his wife Jill as Soloist. The success of this evening gave the committee the impetus to arrange further concerts, and leading up to the summer of 1972, further concerts were arranged featuring such well known organists as Arnold Loxam and Doreen Chadwick, but this time with around 200 people attending. Yes, the word was spreading. During the summer break however, important events took place. The idea of a pipe organ installation in the Welfare Hall was still very much alive, but the number of organs available was decreasing, plus the cost of any such organs was also rising. It was around this time that we were informed of an organ to be removed from the Regal Cinema in Durham within the next few months, in order for reconstruction to take place. After discussions with the parent Welfare Committee, and together with Arnold Loxam, a visit was arranged to view the organ and assess its suitability. It was agreed that it would be ideal for our needs but the subject of finance then raised its head. Again, after talking with the Welfare Committee, they very kindly offered to purchase the organ on our behalf, and then provide extra funding to cover its installation. This sum amounted to ÂŁ1000, quite a lot of money way back in 1971, and a bold commitment by the Institute committee, not knowing how much success they could expect. As we now know seated here today, it was a good commitment and the rest is history. For us to succeed with the project we needed a professional organ builder, and that is how Ted Aistrup became involved, and we couldn't have found anyone better, as he had served his apprenticeship with Hill, Norman, and Beard, the very company who developed the Christie Theatre organs in this country.

When everything was in place a team travelled up to Durham and worked throughout Saturday night to remove the stage from above the organ, get out the console, and also remove the blower and various other parts and transport them back to Harworth. A couple of weeks later this was repeated, and two journeys were made with the van to and from Durham in one night, to remove the rest of the organ and bring it back here. Everything went into store in the old Wages Office at the Colliery and then over the next 18 months work was carried out refurbishing various parts of the organ and the installation was made in the Hall, using approx. half of the Cloakroom in the foyer. A shed was constructed in the joiners shop at the pit, and then installed outside the Hall frontage to house the blower and generator. You can peruse the collection of photos at the interval, and realise just how much pipework etc. there was stored and worked upon in that old office. So everything was set for the grand opening, publicity was worked on, which paid handsomely, as the Hall was filled to capacity for the opening concert on the 30th September, 1973. For the opening concert we were pleased to welcome the old Organ Grinder himself, Robin Richmond of Radio2 fame with the Organist Entertains show, and David Hamilton, a young man who later became Vice President alongside Arnold Loxam as President. Sadly, none of these gentlemen are with us any longer, and maybe the saddest loss would be David, as he suffered a brain tumour and passed away very young in Chicago. Keith Phillipson, the North of England Representative of the Theatre Organ Club was the Master of Ceremonies for the day. Oh, for those days to come back as we regularly played to upwards of 200 people at concert's, and 150 plus at dances. Sadly, as people get older and eventually pass on to that organ club in the sky, our numbers are nowhere near that figure any more, but we are very gratified to know you all still come along and support our efforts in reasonable numbers, it would just be great if we could recruit a younger element to eventually take over the reins and keep the society running for another good number of years, as we are all getting a little â&#x20AC;&#x2DC;longer in the toothâ&#x20AC;&#x2122;. When the organ was first installed it was a 2-6 rank machine, to decipher that, 2 keyboards and 6 ranks of pipework, since then other ranks have been added plus a third keyboard, so it is now a 3-10 ranks organ. Other things have also been added like a Crescendo Pedal, Xylophone, Diaphone

Pedal Rank, the Chimes have been changed to a Full Length set instead of the ¾ length set as original, A Trumpet and Kinura Twin rank was obtained from a Church in Sheffield and installed including its own regulator as it worked on a lower pressure than the Christie ranks. Probably the most significant addition that anyone notices is the Phantom Piano, this was bought at Spencers Auction house in Retford and transported here in a borrowed Horse Trailer, and then our good friend Ray Booth from Mansfield came along and did the necessary electrification on it, again, sadly, Ray is no longer with us. Without a doubt the most significant addition to the organ has to be the placing of the console on its lift. This happened in late 1977. The lift had been removed and transported here from a cinema in Stratford, London, upon its arrival in Harworth it went into store in a shed known as the ‘Chapel’ behind the joiners shop at the pit, and it was sheer pure luck that one day the foreman decided that we would have a clear out in the ‘Chapel’ and I was part of the team to do it. It was while clearing this out that we came upon a pile of steel in the far corner, my mate said, ‘What the so and so is this rubbish’, obviously I recognised it as parts of the lift, and had I not been part of the clear out team, it’s quite likely it would have been transported down the yard and placed in a skip. From this point I reported it to the committee and over the winter we worked on it in the old ‘Pit Pony’ stables at the pit, using mainly only a hand lamp and an old Wolf hand drill, although we did have the luxury of taking the larger bits down the yard to the fitting shop and using the mechanised handsaw etc. Many visits were made to the Hall to check measurements etc. and the morning after the Nigel Ogden concert in November, work started to unsolder hundreds of wires, re-route them under the stage, cut out the hole in the stage, fit the lift structure, re-solder the wiring, and have everything ready for the Christmas Concert in mid December with President Arnold Loxam. Thinking about it now, we must have been mad to attempt such a project in such a short space of time, about three weeks to be exact, but everything went to plan and the great night arrived. The whole of the committee had been sworn to secrecy, so it was a complete surprise for everyone to find the curtains opening, the organ playing but not in view, until a few seconds later, it started to rise from below stage level. It was obviously one of the many highlights and memories from so many years and one that we could never repeat, it was a complete one off and a ‘Hair standing on end’ night.

My one sadness surrounding the lift is the fact that it had always been my Brother Ken's ambition to see it installed, possibly as he had journeyed down to London to collect it in the first place, but it wasn't to be as he passed away in the previous January. Some years ago, along with the Institute Committee's backing and with contributions from both organisations, new stage lighting was installed. Originally this was controlled on the gantry at the side of the stage. The one problem with this was the fact that from there you only got a side view of what you were doing, so in later years, again using a part of the cloakroom, a new lighting room was installed there, so now whoever is controlling the lights can see exactly what they are getting. A new light sensitive curtain was bought and installed at the back of the stage, so now we can say that we claim to be a quite well equipped mini theatre with excellent facilities. Much work has gone on over the years, not only as part of the organ installation, but also within the hall itself. As main users, the organ society have overseen most of the maintenance of the hall for many years, and we are indebted to the people who have come along and volunteered over this period of time, to help keep the building up to the standard that you see today. It hasn't been easy and there have been problems on the way, none more so than when the old Institute building, our Parent Company, closed and eventually burnt down. This left us in limbo for around three months, but through hard work and sensible negotiations, we survived that episode, and hope that we can look forward to a bright future. None of anything that has been mentioned within this brochure, could have been achieved without the absolute commitment of so many good and honest volunteers, prepared to give of their time freely to the cause, and this also applies to the thousands of you members and general public who have supported us over the last 40 years. To everyone, living or dead, we owe a great big debt of gratitude, so

Many, Many Thanks to you One and All

Reg Simpkins Stan Morris and Tom Edwards Pictured in the old wages office at the Colliery. The question is Where do we start?

Many of the original committee members are pictured above at an early concert in the upstairs concert room at the Institute, along with organist Ernest Broadbent of Blackpool Tower fame And Joan Owen, Soprano, of Tickhill. The organ in use for these concerts was the Hammond RT3.

The Harworth Organ enthusiasts exist today through the hard work and dedication shown by many members over the years, many of them sadly no longer with us, so cannot enjoy our celebrations today, but they will never be forgotten, and their commitment to our cause will always be appreciated. Our thanks today also goes out to the many thousands of members and the general public who have supported us over all these years, and have turned out regularly in good numbers to enjoy many of the 400 concerts that we have staged since the opening day of the â&#x20AC;&#x2DC;Christieâ&#x20AC;&#x2122; here in the Harworth Miners Welfare Hall. We are very proud of what we have achieved here and hope that we can go on and possibly celebrate our Golden Jubilee in ten years time. Many thanks to everyone for their help and support over the last 40 years. Mick Mason.