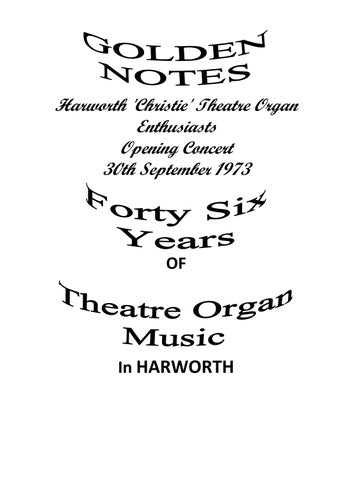 Journal of the Harworth 'Christie’ Organ Enthusiasts September/October 2019 From our Chairperson Dear Members Most of you will know by now about our very loyal friend and, might I say one of the longest serving members of our Organ Enthusiasts (General and Editor of Golden Notes) Michael Mason who hasn’t been very well since December last year and onwards. Michael went into Doncaster Royal Infirmary early June for tests – resulting in a form of treatment for liver/kidney, this is ongoing at the moment. He knows it is going to be long term so it was his suggestion not to be a burden on Olive and family he opted to go into a Care Home near Worksop. They have more facilities to help him. Michael cannot walk now and has to have a hoist getting in and out of bed, bathroom, sitting etc. Brenda and I have been to see Michael, he’s still discussing issues about the Society, wanting to know all the in’s and out’s. But I am sorry to say after over 45 years and it’s a big but, this is permanent for him, at the back of his mind Michael knows this also. What can you say about this dedicated person, Michael is Harworth. Number one enthusiast, hundreds of people know this. We all wish him well. To say all our Committee have been in turmoil is an understatement. Everybody over the last few weeks has been working hard trying to get all sorts of things sorted out. What a lot of time and effort from our Committee has gone into this. We rely on you, our loyal Members and

2 friends to keep this Society going, I would like to see 50 years on our Golden Notes one day. (Michael would want that.) In September we have a Dance on Saturday 21st, 7.30 to 11.00 pm. dancing to Alec Walters, looking forward to that one; and on Sunday it is our A.G.M. starting at 2.00 pm prompt. After that and a tea break we have a mini Concert with another young man, Lewis Scott. I think I’m right in saying he’s from Hull. Two young ones, one in September and one last June – 19 years old Declan Poole. My wish a few years ago to have more up and coming young ones to play our Christie Organ. What an excellent performance for us that was, our audience was spellbound; after the Concert people stayed back to congratulate Declan. It was gone 6.00 pm before I could lock up shop, such was his appeal. We must thank Kevin for looking after him on that Sunday. By the way it was Declan’s debut at Harworth. Another weekend to look forward to is in October, 26th and 27th. Dancing on the Saturday to Chris Johnson and on Sunday we have Kevin Grunnill. That should be a super weekend for Harworth. Our diary dates we think contain a good mixture once again this season of artists to look forward to. All we want is people to come and enjoy. Back to Michael, all at Harworth wish you better days ahead. See you soon Chair, G P Randles P.S. Everyone who helps out at all our events, we appreciate it immensely, Thank you. We are pleased to have Sally Taylor as our new Concert Secretary. She is a very knowledgeable lady, and on laptops too which will help immensely booking future organists, from her first starting last month she has done a grand job, “Brill”. Chair, Peter

3 The Robert Davies Dance 25th May 2019 Once again, Robert Davies played for our May dance and he has become popular with the Harworth dance crowd, this evening being no exception. Robert gave us a good mixture of dances and provided us with an enjoyable evening of music. We would like to thank Robert for being able to play for us and provide entertainment, and also many thanks to those that helped out on the night. Volunteers are always welcome. We look forward to Robert returning to Harworth next season.

The Kevin Morgan Concert 26th May 2019 It was great to welcome back to Harworth Dr Kevin Morgan, all the way from sunny Lancashire! Kevin got straight into action and opened up with a lively march entitled ‘North of the Border’. This was followed by a tune called ‘Spread a Little Happiness’, and the atmosphere most definitely was a happy one. Next up we had ‘Pedro the Fisherman’, followed by ‘One Day When We Were Young’ and ‘Come Hero Mine’. Kevin then played a very well known tune by Eric Coates which was used for the signature tune of “Desert Island Discs” ‘Sleepy Lagoon’. The tempo changed into a somewhat bouncy mode with a very catchy little number called ‘Syncopated Samba’. The next selection was all about a very well known icon of the 1950’s, Doris Day. Kevin put together a celebration of tunes she made famous including ‘Secret Love, Que Sera Sera, Love Me Or Leave Me, and Perhaps, Perhaps, Perhaps’. Next we had a variety of music including ‘My Blue Heaven, Sentimental Journey and Parade of Sunbeams. Kevin then played ‘Nola’ which is a well known novelty theatre organ number. Altering the mood slightly, we heard a good selection of foxtrot standards including ‘It Can’t Be Wrong, Georgia On My Mind, Red Roses For A Blue Lady, It’s Been A Long, Long Time and Getting Sentimental Over You’. Kevin rounded the first half up with ‘Cherokee’, and the first half came to a close.

4 INTERVAL The second half was just as enjoyable as the first half, and we were treated to a varied selection of music starting off with ‘Dream A Little Dream and Quando, Quando, Quando’. Next we had a few easy listening tunes from the crooners including ‘Smile, I Left My Heart In San Francisco, When I’m 64’ from the Beatles, and a classic tune from the 1960’s, ‘Love Me With All Of Your Heart’. Next we heard a very catchy number called ‘Valencia’, a song from the 1950’s. Keeping the temp upbeat, Kevin then played a jolly number called ‘Butterflies In The Rain’. Staying with a faster tempo, we had some foot tappers of ‘Alexander’s Ragtime Band, Anything Goes, Is It True What They Say About Dixie’. A few quieter tunes followed with the ‘Pearl Fishers Duet and Minuet in A’. Finally the Concert came to an end with a selection from the popular West End show, Les Miserables. Once again, Kevin delivered a top show for us and we hope to welcome him back in the very near future. Reported by Sally Taylor and Alan Clayton Compiled by Sally Taylor

There was no dance in June. The Declan Poole Concert 23rd June 2019 As many of you are aware, Declan won the Young Theatre Organist of the Year 2015 Award and he is a young and upcoming theatre organist. Declan was making his debut at Harworth and it was his very first full length concert and the audience were not disappointed. Declan opened up with ‘Cabaret’ to get us all feeling upbeat and lifted. This was followed by softer registrations that were coaxed from the Christie to play ‘A Nightingale Sang In Berkeley Square’. Next we had a selection of famous show tunes which included ‘Oh What A Beautiful Morning, My Favourite Things followed by A Wonderful Guy’. The tempo slowed down slightly with a tune composed by

5 Bob Dylan and recently revived by Adele, namely ‘To Make You Feel My Love’. Declan played his “Rose Selection” next and we all guessed the titles which included ‘Everything’s Coming Up Roses, Honeysuckle Rose and The Days of Wine and Roses’. A few old popular standards followed with the classic tune of ‘Stardust, Meditation and Desafinado’. By this time, Declan was getting quite comfortable with the feel of the Christie. The next selection was a quickstep tempo and we heard ‘Top Hat White Tails, Cheek To Cheek, How To Keep The Music Flowing, I Got Rhythm, A Foggy Day In London’ and finally concluding the first half with ‘S’Wonderful’. INTERVAL We welcomed Declan back to the second half and he started off with an appropriate tune entitled ‘Up With The Curtain’. Next followed a couple of tunes from The Beatles, ‘Here There And Everywhere and Yesterday’. Raising the tempo again we had a tune called ‘Joseph, Joseph, Bei Mir Bist Du Shein’ and a selection from Cole Porter including the signature tune from The Organist Entertains, ’From This Moment On, It’s De-Lovely and Anything Goes’. Keeping a quickstep tempo Declan then played ‘Sambalina, Jeepers Creepers’, and then slowed down with ‘You’ll Never Know’. The audience were really warming towards Declan and no wonder why when his choice of popular tunes were just what the doctor ordered. A well known tune from Glen Miller, ‘Chatanooga Choo Choo’ went down well, this was followed by a softer setting with a romantic ballad, ‘I Only Have Eyes For You’. Some lively foot tappers got the audience captivated with ‘Lullaby of Broadway, 42nd Street and The Lady Is A Tramp’. Declan brought the concert to an end with his last selection of ‘My Funny Valentine, Blue Moon and Has Anyone Seen My Gal’. As Alan wrote on the sheet “Good Show”. This was Declan’s first visit to Harworth and I am sure it will not be his last. We wish him every success with his musical career and we hope to see him back at Harworth in the near future. Reported by Sally Taylor and Alan Clayton Compiled by Sally Taylor

6 We have disabled access and specially provided toilet facilities. Please tell your friends about our music venue and pass the message on. Thank you.

PLEASE NOTE THAT THE A.G.M OF THE SOCIETY TAKES PLACE ON SUNDAY 22ND SEPTEMBER STARTING AT 2PM and the Concert will follow at approx. 2-45pm Any items for discussion at the AGM MUST be in the hands of the General Secretary by the last day of August. Thank you for your support The H. C. O. E. Committee.

THE HARWORTH ORGAN ENTHUSIASTS was founded in December 1971 by Mr. S. Morris and a team of enthusiasts, to cater for people interested in the Preservation of the Mighty Theatre Organs of yesteryear, also incorporating the Modern Electronic Organs. THE AIMS OF THE SOCIETY ARE:To promote friendship through the common love of organ music, and to provide, on a regular basis, Organ Concerts and dances throughout the year, using both Theatre and Electronic Organs, and featuring the Star Organists from across the British Isles.