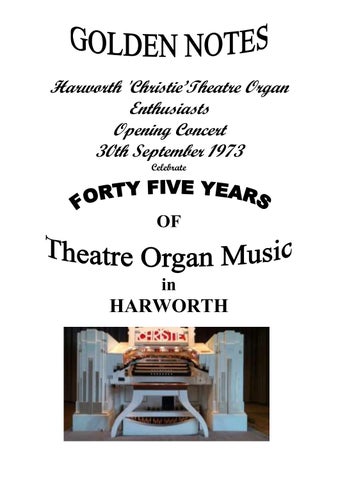 Journal of the Harworth 'Christie’Organ Enthusiasts September/October 2018 Hello Everyone It seems quite a while since I last saw you all, but of course it’s only three months. How time flies as you get older. So it’s the start of another brand new season of Dances and Concerts here at Harworth, and as you will realise by looking at the inside front cover page, this month we celebrate 45 years of the Christie being here in the Hall. As many of you know, since its installation quite a few changes have been made to the organ. A couple of extra ranks of pipes, a Xylophone, and a Phantom Piano have been added, plus a Trumpet rank and a third manual, making it now a 3-10 instrument instead of the 2-6 one that we purchased in 1972. Maybe the most striking thing is the fact that it was placed on the lift in late 1977. Much work for many people but what a result. I look at 45 years existence as being a great milestone in the history of the Harworth ‘Christie’Organ Enthusiasts, and many happy memories come back to me looking back over those years. Times that I am quite able to recount as this month I also celebrate 41 years as your General Secretary. I could never have believed that this would happen when I took the job way back in 1977. I say ‘took the job’but I was more like pushed into it that Tuesday evening at the AGM. So just taking a few lines to look back over those years, who could ever forget the great times that we had with organists such as our original President Dr. Arnold Loxam, Vice President David Hamilton, what a shock that was when he passed away at a very young age in Chicago, The late, great Geoff Stephenson, another shock when the vicar of Maltby rang me on Boxing day to give me the news and Charles Horrex, who would come up from Kings Lynn and play for the dance on the Saturday and the concert on

2 the Sunday. It was quite ironic that we got to know Charles and his wife Diana just about the time that Prince Charles and Diana were getting together. Sadly all four of these organists have now passed away, but they have been replaced on the organ circuit by many new faces, and while it is not possible to engage everyone, we do try to give you a good mixture and feature a new face now and then. So looking forward to the new season, we have a good mix of organists coming along to entertain you, some making an immediate return from last year, and others returning after a few years away. When you receive this newsletter, you should also receive a new Diary Card, but I am going to print it overleaf just in case you lose yours. We do of course give you all a big Thank you for your support, and hope that it will continue in the new season. Stay ORGANISED Mick Mason.

Please note that the Annual General meeting on September 23rd is a 2pm start, followed by the Keith Beckingham concert at approx. 2.45pm.

4 The Cameron Lloyd Concert Sunday, 27th May 2018. At the end of Cameron’s concert we were able to give the audience a lovely surprise when I announced that Cameron had accepted our offer to become a Vice President of the society. I know it was a great surprise to his parents sat in the audience. On behalf of the society, I would like to thank Cameron for accepting the role and we look forward to working with him in the future. Cameron began his concert with ‘Beyond the Blue Horizon’, and then went into ‘Imperial Echoes, Those Magnificent men in their Flying Machines, Forever and Ever, and Save my Love’. Into a lengthy selection now which included ‘I Just Called to say I Love You, Chanson D’amour, Jealousy, Spanish Eyes, Dream, Sloop Song, Dancing with Tears in my Eyes, Fascination Waltz, Comma Prima, She Wears my Ring, and Five Minutes More’. More very popular songs next with ‘Blue Moon, Venus in Blue Jeans, Alice Blue Gown, and On the Prom, Prom, Who’s Sorry Now, and When You’re Smiling, and Moonlight Bay. To bring the first half to a close Cameron went into a favourite with many organists, and gives them the opportunity to show off their musical. Skills, it was of course ‘12th Street Rag’. INTERVAL To begin the second half it was another favourite, ‘I Do Like to be Beside the Seaside’, followed by ‘Blaze Away, Calling all Workers, and Somebody Stole my Gal’. Following on was ‘Ramona, and the Chattanooga Choo, Choo’. Another fairly long selection now with ‘Is it True what they say about Dixie, California Here I Come, Mammy, Robert E Lee, Carolina in the Morning, and Swannee River’. Time now for another good selection of music which included ‘Side by Side, My Old Man said follow the Van, When you grow too old to Dream, If you knew Susie like I knew Susie, It’s a long way to Tipperary, Keep right on to the end of the Road’. Obviously you will realise that many of those songs referred to the wartime music.

5 A little tribute to the fabulous ken Dodd next with ‘Tears for Souvenirs, Love is like a Violin, and Happiness’. To being the afternoon to a close Cameron chose music from the Musicals, his choice included ‘Singing in the Rain, Oh Yes, I remember it well from Gigi, The Night they invented Champagne, make Believe, Edelweiss, Chitty, Chitty Bang, Bang, All I ask of you’from Phantom of the Opera, and ending with ‘There’s no Business like Show Business’. There most certainly isn’t and Cameron proved that this afternoon. Sally and Alan sum it up by saying, ‘Once again, a fabulous show’. Many thanks to Cameron and we do of course look forward to his return in the not too distant future. Reported by Sally Taylor and Alan Clayton Compiled by Mick Mason. The Michael Carter Concert Sunday, 24th June 2018. As many of you will recall, the June concert should have been the debut at Harworth for Penny Weedon, but due to circumstances with both her health and her husband’s restriction in driving, she had to cancel. It was a great disappointment that Penny could not make it. Personally I was really looking forward to meeting her after reading her contributions in the keyboard Review magazine, but such is life. Mick Mason. Her place was taken by another debutant at Harworth, Michael Carter. Michael began his concert with ‘I’ll see you in my dreams’, followed by ‘Anything Goes, That’s why the Lady is a Tramp, Has anyone seen my Gal, and Ma, he’s making eyes at Me’. March time next with the ‘RAF March Past’. Marches are always a good inclusion in the programme and this one was no different. Moving on now with ‘A Dream is a Wish that makes your heart ache’from Cinderella. Then the theme form the ‘Godfather’.

6 A bit of foot tapping time now with ‘Swinging Safari’, followed by ‘Only Love, Sometimes when we touch, I vow to thee my country, Zippo de Doodah, Charma Chameleon, and Woody Woodpecker’. Back into the military theme again, this time with ‘633 Squadron’. Followed by ‘Somewhere out there’. Taking us to the interval now, Michael gave us ‘Little Red Monkey, Up a Lazy River, Two Lazy People, Stardust, March from The Raiders of the Lost Ark, and Somewhere over the Rainbow’. INTERVAL For the second half, Michael began with ‘Theatreland’, before going into ‘Sleepy Time Gal, Diana, and Our Love Affair’. Time for a visit to the Elvis Presley era now with ‘Jailhouse Rock’. Another selection of popular music was next with ‘Catch a Falling Star, Bye, Bye, Love, Gigi, The Story of my Life, Tonight, Meditation, Sweet Caroline, Song Sung Blue, and Don’t Bring Me Flowers’ Next was a selection of music form ‘Blood Brothers’. Followed by ‘City of Dreams’. To bring the afternoon to a close Michael gave us a selection of music from Willy Wonker, plus ‘Candy Man Can and Pure Imagination’. As Sally and Alan says, another good show, and I would to add my thanks to Michael for stepping in for Penny Weedon, and of course we wish Penny and her husband better health in the future. So there we have it, another season come to a close, with the last Newsletter of the 2017-2018 season, and no doubt you will be looking forward to the new season starting shortly. I hope that everyone has enjoyed the summer break, even though it may have been a little bit too warm at times, and I hope that none of you have had too much sun, (unlike myself when I got my ankles burnt while out with the caravan, not a pleasant experience I can assure you.) and are now looking forward to some great evenings of dancing, and some great entertainment on a Sunday afternoon. As already mentioned, your support for the society is very much appreciated, and we hope that you will all enjoy good health, and be able to continue your support over the next season.

Hoping to see you at the Annual General meeting on the 23 September, when we welcome back Keith Beckingham for the concert. Until then, look after yourselves and â&#x20AC;&#x2DC;see you soonâ&#x20AC;&#x2122;. Mick Mason.