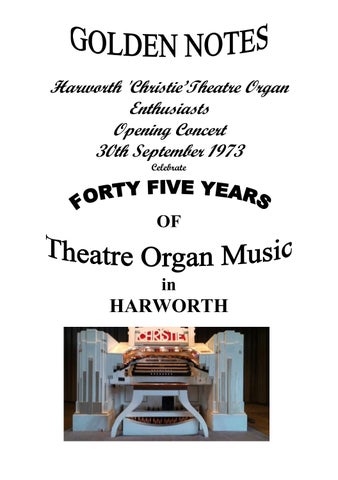 Journal of the Harworth 'Christie’Organ Enthusiasts November/December 2018 Hello Everyone So here we are with another edition of ‘Golden Notes’, and we are now a quarter of the way through yet another season. It’s quite unbelievable how the time goes by. It is nice to say that we have started once again with two very good weekends, First of all with Bill King and Hilary for the dance on the Saturday, then it was the Annual, General Meeting time on the Sunday, followed by a brilliant concert with Keith Beckingham. It was lovely to see Keith come back to entertain us , as we believed after his last visit that he was planning to retire, what a loss that would be to the organ world. Not a lot happened at the AGM. Everything went smoothly with no alterations to announce. All the committee were re-elected en bloc. The only thing that did come out was the fact that while we appreciate that many of you travel a fair distance to enjoy the concerts, we shall have to review our prices come the New Year, even then, compared with other societies, we shall still remain the cheapest anywhere. The October dance and concert was a double booking as we welcomed back Joanne Naulls for both events. As you will notice from the diary cards we have doubled up on some of our weekends this year. By doing this we can get a much better deal from the visiting organists. We know it’s nice to have a varied programme but in doing this we can keep our prices to suit your pockets much easier.Hopefully we can count on seeing many of you at our future dances and concerts, and in the meantime I look forward to seeing you for the Matthew Bason weekend in a week’s time. Regards Mick Mason.

2 The Bill King and Hilary Dance 22nd September 2018. It is always a pleasure to welcome Bill and Hilary back for an evening’s dancing, as we know that they will give us a lovely evening’s entertainment, and dances in perfect tempo. Such was the situation on this visit, and on behalf of everyone I would like to thank them both for their contribution. There is no doubt that they will be back again in the near future. The Keith Beckingham Concert 23rd September 2018. As already mentioned in the editorial, Keith’s concert followed the Annual General Meeting, and it was well worth waiting for. Keith began his concert with ‘Tonight’, and then followed on with ‘What a Lovely ay to Spend an Evening, Just the Way You Are, and finishing with Tonight’, from ‘West Side Story’. Next we had a selection from the ‘Dancing Years’, ‘I can Give you the Starlight, and Waltz of my Heart’. Another three songs forming a selection now with ‘Girl from Ipanema, Sweet Georgia Brown, and For All we Know’. Continuing , Keith gave us ‘I’m in Love for the Very First Time, Once in a While, I’m Beginning to see the Light, and Fascinating Rhythm. Keith then took us on a romantic trip to collect ‘Tulips from Amsterdam’, then ‘Wunderbar’, then we visited ‘Vienna, city of my Dreams’, before we went under the ‘Bridges of Paris’, then on to ‘Wonderful Copenhagen’, and a ‘Portrait of my Love’, we then fitted in a call where we had ‘From Russia with Love’, followed by ;Hey There, If I Loved You, Arriva Derchy Roma, Volare’, Funiculi, Funicula, and finally we met ‘The Girl From Corsica’. What a trip that was. Another selection of very popular music was to take us to the interval, as Keith offered us ‘Who’s Sorry Now, Whispering, Hello Dolly, It’s Almost Like Being in Love, The Heather on the Hill, Quando, Quando, This is my Lovely day, and Granada’. What a brilliant first half that proved to be, and no doubt much more to come after the interval. INTERVAL

3 To begin the second half Keith gave us a ‘foot tapping’ selection which included’ Let’s Play the Music and dance, Change Partners and dance with me, and Cheek to Cheek’. Next we had a ‘Seasonal Selection’, ‘ September Song, September in the Rain, Autumn Leaves, Autumn Concerto’ were the songs chosen. A visit to the USA now for ‘New York, New York, and Chicago’. Keith couldn’t have chosen a better tune than New York as this is the song my Rotherham United team come out to. We were now coming towards the end of a wonderful afternoon of music, but not before we were treated to a lengthy selection of music, which included song s from the musical South Pacific. ‘Bali High, I’m Gonna Wash that Man right out of my Hair, There’s nothing like a Dame, This nearly was Mine,, Some Enchanted Evening, and I’m in Love with a Wonderful Guy’. To finish Keith expressed his wishes in music with ‘We’ll Meet Again’. I sincerely hope that we can meet again, what a great afternoon’s music we had, and as Sally and Alan say, Once again a First Class Show. Many thanks Keith, I hope it’s not the last we see of you here at Harworth. Reported by Sally Taylor and Alan Clayton Compiled by Mick Mason. The Joanne Naulls Weekend 27th-28th October 2018. It was nice to welcome Joanne back for another weekend of good music, both for dancing and for the concert on the Sunday. Joanne brought along her trusty electronic organ and used it both days, with the most time spent on the Christie. I have to say that she did very well to cope with the few problems we had on the Christie, mainly the fact that a couple of the foot pedals had to be isolated due to a fault, and on the Sunday we had to disconnect the symbol as it kept going off whenever it liked. Other than these little problems, we had a lovely dance on the Saturday night. For the Sunday concert Joanne started with her signature tune, ‘ I am what I am’, before going into ‘Dizzy Fingers’ and the ‘Best of Times’.

4 Following on we had ‘Top Hat and Tails, Let’s Play the Music and Dance, Count your Blessings instead of Sheep, I saw Mummy Kissing Santa Claus’, and a return to ‘Let’s Play the Music and Dance’. Joanne then moved over to the electronic to give us what you might call a ‘Trip Abroad’ with ‘Amore’, Under the Bridges of Paris, Tulips from Amsterdam, The Rose, Brazil, Quando, Quando, Laughing Samba, Enjoy Yourselves it’s later than you think, and the Cherry Blossom Samba’. It was later than we thought as it was interval time. INTERVAL To begin the second half Joanne chose the Dusty Springfield number, ‘Believe Me, followed by ‘Be By My Side’. Three more tunes for the next selection were ’Only Fool s Rush In, Falling in Love With You, and You Don’t Have to say You Love Me’. As we were only a few weeks away from commemorating the 1918 Armistice, Joanne put together what can only be described as a wonderful tribute in music to the fallen. Starting with three hymns, it was ‘A Channel of your Peace, The Holy City, and Bless This House’ and then incorporating the RAF March Past and 633 Squadron, and the Dam Busters March’ A wonderful selection as it also celebrated the 100 years formation of the Royal Air Force. Staying with the wartime theme, Joanne then gave us a good selection of music to join in and sing along to. ‘All the Nice Girls Love a Sailor, Tipperary, Pack up your Troubles in an Old Kit Bag, Hang out the Washing on the Siegfried Line, Bless em All, The White Cliffs of Dover, Lily Marlene, Our Help in Ages Past, There Will Always be an England, and Land of Hope and Glory’. What a great way to take us to the remembrance weekend. To finish her concert Joanne chose to play the ‘South Rampart Street Parade. A lovely weekend of dancing and good music, Many thanks Joanne, we shall see you back again soon. As Alan and Neil say at the end of their report, A Grand Show even with the Gremlins. Reported by Alan and Neil Clayton Compiled by Mick Mason.