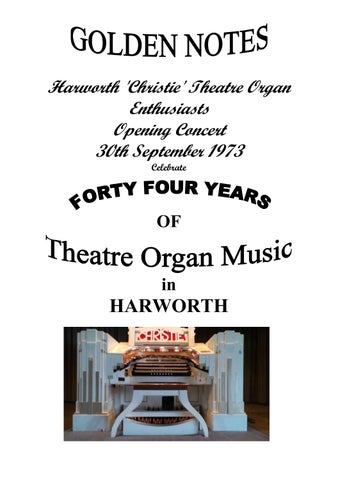 Journal of the Harworth 'Christie' Organ Enthusiasts November /December 2017 Hello everyone Here we are settling into another season of Dances and Concerts, the 44th as it happens. The AGM has gone and despite the very poor turnout of only around 35 members, I am pleased to report that everything went well, The Committee and Officials remained as last year and the only alteration was that despite us showing a small profit on the last year, compared with a Deficit the year before, Members attending unanimously agreed to our recommendation to increase the cost of Admission to concerts by 50p. And 50p increase on membership, with Dance admission staying the same for this season. As was pointed out we are still one of the cheapest societies around, be it Theatre or Electronic. Over many years we have been well aware that many members travel considerable miles to attend our events, hence the reason to keep our prices as low as possible. There was a surprise for pretty well everyone when I brought the Christie out of the stage playing ‘Once in a While’ or as I explained ‘Once in FORTY Years’, as on that Sunday I celebrated being your General Secretary for the last 40 years. At the end of the AGM our Chairman Peter gave me a surprise by presenting me with £45 that the |Committee had donated, for Olive and myself to go for a meal, and while we haven’t used it yet, when we do we shall enjoy the occasion and think of you all, Thank you. Also to celebrate the occasion I had put together a 10 page magazine of my memories from all those years. As I said on stage that while it wasn’t a condition, if anyone would like a copy of my magazine, any donations will go to charity. I was pleased to see that when I got home the donations had amounted to £25-50, and then on the following Thursday a lady gave me another £10. It was a lovely surprise to see that amount. I still have some left and they will be on the side table at the concerts. Thank you to the members who attended the AGM, but PLEASE, let’s have a better turnout next time.

2 The Bill King and Hilary dance 23rd September 2017 As usual Bill and Hilary gave us a very enjoyable evening of dancing to suit all tastes on the 23rd. Coupled with their singing voices adding to the evening. One thing that sticks with me that evening was that a couple who have recently started coming to the Wednesday T. Dance joined us for the dance, and the look on her face as the curtains opened and the organ climbed from below stage was a sight to behold, she had no idea the organ was on a lift. Another lovely evening for everyone so Many Thanks once again to Bill and Hilary, we obviously look forward to your return next year. Just mentioning the Wednesday T. Dance above, could I just remind that if you are at a loose end on any Wednesday, you are very welcome to come and join us. The Dance runs from 2pm to 4pm with an interval around 3pm, when members enjoy free Tea and Coffee and the snacks that they very generously bring along. I provide the music using C D’s and the cost is a very reasonable £2 per person. Why not come along and enjoy a bit of Sequence and Ballroom and a couple of Line Dances after the interval. Over the years we have created a very friendly atmosphere and I am sure you would enjoy it. Can I remind you also that we shall be holding an Armistice Dance on the 11th November, with me again providing the music using CDs, and of course at the 11th hour we shall pay homage to the Fallen. The cost is £5 with free Tea or Coffee at the interval. Should you wish to join us then please let me know so that a table seat can be reserved for you. Times are 7-30pm to 11-15pm. The David Redfern Concert 24th. September 2017 David began his concert with his signature tune ’Gaily Through the World’, and then went into the’ RAF March Past’. Next was a selection from Chitty, Chitty, Bang, Bang, tunes included were the ‘Carousel Waltz, and Somewhere over the Rainbow’. Next we had ‘ There will never be another you, Moonlight Serenade, In the Mood, and the Russian Rag’. Surprisingly this brought us to the interval. INTERVAL

3 To begin the second half we had ‘Funiculi’, Funicula. Then it was time for a bit more foot tapping with ‘Putting on the Ritz, Don’t put all your eggs in one Basket, Isn’t it a Lovely day to be out in the Rain, and Dancing Cheek to Cheek’. Next was another selection of lovely tunes which included ‘Top Hat, White Tie and Tails, Let’s Face the Music and Dance, One Moment in Time. Next was the Toccata and Fugue, and what a sight it was to see David’s fingers go over the keys in that one. Another couple of lovely tunes next with ‘Someone to Watch over You, and A Nightingale Sang in Berkeley Square’. Time now for the piece that no-one will forget if they watched Britain’s Got Talent a couple of years ago when ‘Subo’(as she is called) sang ‘I Dreamed a Dream’. More Dreaming music followed as we started to think about the end of the afternoon, ‘I’ll see you in my Dreams, and Dream’. To bring his concert to a close David gave us ‘ That’s my prayer at the end of the Day, When Day is Done, and The Day Thou Gavest’. Sally and Alan finish with ‘Once again, Great show’. Who could argue with that, many thanks David and we look forward to your return to play for dancing alter in the season. Reported by Sally Taylor and Alan Clayton Compiled by Mick Mason Christmas Hampers If anyone would like to contribute towards the Christmas Hampers and Raffles, it would be appreciated if you can bring any items along to the November weekend. Many Thanks. ************************************************* The Robert Davies Dance 21st October 2017 We were very pleased to welcome Robert back for the October dance, and he gave us a very pleasant evening’s dancing and I did receive quite a few compliments regarding the fact that his Tempos were ‘Spot on’, together with some lovely tunes that he used. I have to totally agree with these comments and would like to say a very Big Thank you to Robert for such a lovely evening’s entertainment, and we look forward to his return in the next season. ……………………………………………………………………………………

4 The Chris Powell Concert 22nd October 2017 It was nice to welcome Chris back for his concert, he arrived, along with his Dad at around 10.30 a.m., and after brewing a cuppa, we had a lovely few minutes chatting about anything that came to mind, even a bit of ‘Brexit’, Ha Ha. Chris began his concert with his signature tune ‘If my friends could see me now’, and then went into a selection of Marches which were ‘High School Cadets, Blaze Away, and the Dam Busters March. Next we had a selection from the film Titanic, beautiful music. A bit of foot tapping music with ‘Lady be Good, Embraceable You, our Love is here to Stay, I’ve got Rhythm, Swannee, and Someone to watch Over me’. Next Chris talked about a trip he made to Paris years ago and a visit to the Folies Bergere to see the ladies. (I hope Marie didn’t find out), and of course this gave him the momentum to play ‘Orpheus in the Underworld’. (or as Brian Sharpe use to say, Orpheus in his Underpants), and the Can Can. I think Chris was a bit disappointed that no one got up to do the Can Can. Time now to find the wonderful Bagpipe sound that is hidden in the Christie for ‘Highland Cathedral’, what a lovely piece of music that is. A trip to Blackpool took us to the interval and reminded Chris of his time spent there, and what else could we start with than ‘I Do Like to be Beside the Seaside’, followed by ‘For You’, Ernest Broadbent’s signature tune, ‘Around the World, Blue Moon, Old Piano Rag, Russian Rag, and Rosalie’. Great first half and much more to come. INTERVAL To begin the second half we had a trip abroad, taking in ‘Brazil, Spanish Eyes, Ben, Tea for Two, Cherry Pink and Apple Blossom White, Jealousy, El Cumbanchero, and Cumana’. Time now to pay a visit to the Theatre Musicals, with music which included ,‘All I Ask of You, Cabrera, Mack and Mabel, Don’t send Roses, You’ll Never Walk Alone, The Best of Times, and Music of the Night’. What a brilliant selection that was. Next Chris gave us ‘Vidor’s Toccata and Fugue’, Brilliant, how on earth do you play a piece like that without a note of music in front of you? I am sure no one could ever forget the music of ‘Abba’, and Chris made sure and he gave us ‘ Waterloo, Money ,Money, I Have a Dream, The Winner takes it All, Dancing Queen, and Thank You for the Music’. We certainly did thank Chris for the music that afternoon but he wasn’t finished yet.

5 To bring his concert to a close he played music that everyone could join in with and sing, which some of you did, ‘We’ll Meet Again, You Made me Love You, I’m, going to Sit right down and write myself a Letter, Bless ‘em All, Daisy, Somebody Stole my Gal, It’s a Long way to Tipperary, and 12th Street Rag’. Sally and Alan close with ‘What can I Say, Beat That’. It would be very difficult to ‘Beat That’, the amount and variety that we were given that afternoon was amazing, all played without a note of music on the stand. The only thing I can say is ‘ Many, Many Thanks Chris for a lovely afternoon, and we do of course look forward to your next visit, which will be the February Dance, 2018, it will soon be here. Reported by Sally Taylor and Alan Clayton Compiled by Mick Mason