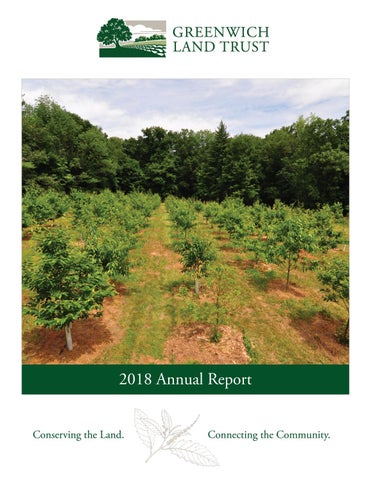 A LETTER FROM OUR LEADERS As we wrap up another successful year at Greenwich Land Trust, our achievements result from the strong commitment by our community to conserve and steward our important open spaces. 2018 was an exciting year for the Land Trust, building on past successes while simultaneously laying a strong foundation for the future. Because of you — our dedicated supporters — Greenwich Land Trust conserves open space in our community and actively manages and enhances each acre to meet its full ecological potential. Together, we accomplished so much and have a lot to be proud of: • At the start of 2018, we launched our Seed-to-Seed initiative. This native plant project

helps restore vital natural communities through the propagation of native seeds from plants found on GLT’s preserves. In our first year, we grew and planted more than 2,500 plants through Seed-to-Seed! • In February, Greenwich Land Trust received its reaccreditation — an important and

honored recognition that strengthens the Land Trust and its ability to hold land in perpetuity. • Through generous funding, stewardship staff have worked to restore more than six acres of native meadows at our Lapham, Mueller, and Valley Drive Preserves. • More than a dozen bearing-age trees of heirloom apple varieties (Seek-No-Further, Northern Spy, and Black Oxford) were planted at the Malkin Preserve through a partnership with Greenwich Tree Conservancy. The newly established orchard provides

a living link to the agricultural history of Greenwich and is a shining example of community partnership and stewardship in action. Looking ahead, there’s no slowing down in 2019. With a variety of conservation projects taking shape, together we’ll be conserving additional open space, preserving the ecological integrity, historical character, and scenic beauty of our community. Stay tuned for some exciting developments. All these efforts are only possible because of your generous financial support and your willingness to literally and figuratively “dig in” as volunteers. Our most critical and cherished resource is you — our community, supporters and partners. Thank you for making this work possible and ensuring Greenwich’s open space is cared for and conserved for generations to come.

2018 was the inaugural year for Seed-to-Seed, our ambitious native plant initiative at the heart of much of our stewardship and community programming. After collecting seeds of 23 native species from our nature preserves the previous fall, we propagated them in GLTâ&amp;#x20AC;&amp;#x2122;s greenhouse with the help of volunteers. Partners at Greenwich Community Gardens donated over 300 volunteer hours, and the greenhouse yielded over 2,500 native plants!

Plants propagated for Seed-to-Seed allowed us to greatly improve the habitat on our preserves, especially meadow habitat. Meadows are a relatively rare land type in Connecticut, and the Land Trust prioritizes protecting and enhancing them. Using the plants grown in our greenhouse, the Land Trust undertook meadow restoration projects on three different preserves.

By sharing plants, we were able to forge new community connections with schools and partner conservation organizations and support associated educational programming. GLT also documented, protected, and propagated state-listed rare species, such as the stunning purple milkweed (Asclepias purpuraseens). In 2018, GLT became a community hub for growing and learning about native plants.

Landscapes that had been overrun by invasive species, devastated by storms, or relegated to turf grass are now being restored as quintessential Connecticut meadows. The meadow restoration at the Mueller Preserve will serve as an educational resource, as well as a beautiful wildlife habitat. Over 1,500 plants were installed by staff and volunteers along the Virginia Gwynn Trail that meanders through the new meadow space. The trail offers universal access and informative signage for the meadow as well as the woodland, wetland, and demonstration gardens on the preserve.

In April, Greenwich Land Trust partnered with the Greenwich Tree Conservancy on a major orchard planting and landscape restoration at the Land Trust’s Malkin Preserve. Fifteen heirloom apple varieties were planted at the property. The trees are a living connection to Greenwich’s agrarian past, a time when Connecticut supplied fruit and other produce to New York City. In order to maintain these heirloom apple varieties long term, we must protect the open space in which they flourish.

After a comprehensive application process, Greenwich Land Trust was reaccredited by the Land Trust Accreditation Commission, an independent nonprofit that serves as a supporting organization of the Land Trust Alliance — a real feather in our cap. As one of only 25 accredited land trusts in Connecticut, GLT values the importance of this mark of distinction. Primarily focusing on governance, finance, transactions, and stewardship, accreditation is about ensuring that our conservation work lasts in perpetuity.

To commemorate Arbor Day, the Land Trust and Greenwich Tree Conservancy hosted a special event at the Malkin Preserve orchard. Guests included Selectman John Toner and Peter Malkin, who originally donated the two acres of land. Also attending the ceremony was Chris Donnelly, the Urban Forestry Coordinator for the Connecticut Department of Energy and Environmental Protection (DEEP). He recognized Greenwich as a leader in tree programs in the state and read a proclamation from Gov. Dannel P. Malloy, recognizing Greenwich as a “Tree City USA,” one of only 18 in the state.

Guided by and committed to following Land Trust Accreditation Standards and Practices, as established by the Commission, GLT is a stronger organization and a leader in the land trust community. The Land Trust will be up for reaccreditation again in 2023.

Greenwich Land Trust Youth Corps Corp Greenwich Land Trust’s Youth Corps is involved in many GLT conservation projects, so it was a busy summer for our 14 local teenagers. GLT’s Youth Corps, a partnership with the town’s Department of Human Services, marked its fifth anniversary in 2018. Under the supervision of Conservation Educator Dean Fausel, the Youth Corps grew and donated over 650 pounds of fresh produce for the Neighbor to Neighbor food pantry. They improved a mile and a half of trails on our nature preserves, planted thousands of seedlings, cared for heirloom apple trees, cleared garbage from Shell Island, and collected data at the American Chestnut Sanctuary.

Two outstanding Youth Corps employees, Isabel Cartagena and Nicolas Orellana, were presented with GLT’s Youth Conservation Scholarships for their exceptional dedication to the program and the Land Trust. As an organization tasked with protecting open space forever, we especially rely on the Youth Corps as the next generation of conservationists who will continue this vital work.

The Youth Corps was also exposed to a wide variety of conservation issues and careers, receiving a behind-the-scenes tour of the Connecticut Beardsley Zoo’s endangered animal conservation program and visiting the Yonkers Science Barge to learn about hydroponic agriculture and water quality. We trust that their summer experience will inspire them to care for the environment in their daily lives and hope it will influence their future career choices.

volunteer hours donated by special events committees Annual Meeting At Greenwich Land Trust’s Annual Meeting, held December 5 at the Round Hill Club, the Board of Directors welcomed four new members Emily Overlock Curry, Kim Gregory, Andy Pitts, and Glenn Hilliard Shaw. In his remarks, GLT President Matt Bostock said that the organization was “indeed fortunate to have this accomplished group of people join our leadership ranks.” Each year at the Annual Meeting, GLT honors volunteers and partner organizations that have made an outstanding contribution to a project or program. In 2018, the honorees were:

Special Events It was another picture-perfect summer evening for the third annual An Evening at the Farmstead. More than 250 patrons, donors, sponsors, and members of GLT’s Board filled the beautifully lit, historic barns at the home of Greenwich Land Trust – the Mueller Preserve. Guests enjoyed delicious farm-to-table food and craft cocktails, as well as live music from the student musicians of BackCountry Jazz’s BeBoppers. An Evening at the Farmstead co-chairs Carrie Emery, Jackie Keeshan, Karen Shaffer, and Vickie Waters and their committee worked together to inspire the event’s rustic, backcountry ambiance complete with bouquets of wild flowers from their personal gardens and the Mueller Preserve. Proceeds from the evening benefited the Land Trust’s educational programs and conservation efforts.

In late September, more than 1,400 guests experienced the one-of-a-kind Go Wild! family field day at the Greenwich Polo Club fields. Co-chairs Glenn Shaw and Magali Swanson and their dedicated committee put together one of the Land Trust’s most successful events ever. Children, parents, and grandparents spent the afternoon relishing in the specialty food truck fare, playing games, enjoying activities, rides, crafts, and more. Throughout the event, guests soared above the 62-acre preserve in Go Wild!’s signature hot air balloons. GLT thanks the numerous committee members, patrons, sponsors, and volunteers who made the day such a success. gltust.org | 9

Make a Powerful Statement: Leave a Legacy The Evergreen Society is the planned giving program of Greenwich Land Trust. It is an established formal program to recognize and honor all those who have chosen to support Greenwich Land Trust through their estate planning. A gift to Greenwich Land Trust through your will is a powerful statement of support of the mission to conserve and protect land, engage people in its wonders, and prepare to seize the opportunity to protect the last great pieces of natural open space in Greenwich. In addition, with over 750 acres of properties to monitor, manage, and protect, Greenwich Land Trust needs to ensure that ongoing stewardship needs can be met. Your legacy gift will help support our successful future! For more information, contact Will Kies at 203-629-2151 or will@gltrust.org. gltust.org | 10

years of conservation work in our community

We thank our generous supporters. LEADERSHIP CIRCLE $10,000 &amp; ABOVE

We are very grateful to those who chose to honor and memorialize their friends and family by donating to Greenwich Land Trust. In Honor

Names listed reflect cumulative gifts between January 1, 2018 and December 31, 2018. If we inadvertently misspelled or omitted your name, we apologize. Please call our office at 203-629-2151, so we may correct our records. gltust.org | 15

native plants, 23 species grown/planted as part of our Seed-to-Seed initiative

Renew your membership today! In appreciation of your support, Greenwich Land Trust members are offered special benefits. The effort to protect Greenwich’s natural resources depends on the support of our members. Your membership supports stewardship activities, educational programming for all ages, and conservation of open space for future generations.