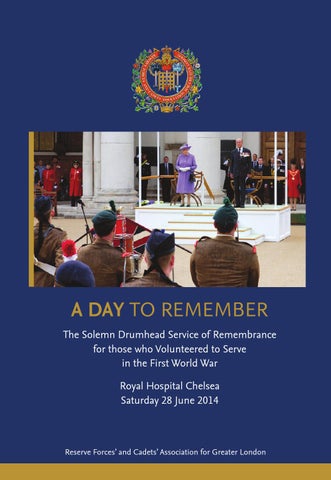 Stepping Forward The presentation of a special leather-bound copy of ‘Stepping Forward – A tribute to the Volunteer Military Reservists and Supporting Auxiliaries of Greater London 1908-2014’ was made to HM The Queen in the Chapel of the Royal Hospital.

Youth Organisations IN Uniform Burton Court was transformed into an exhibition area for some 550 cadets and adult volunteers, with members of the Royal Family and other guests enjoying the displays based on the theme of the First World War, as well as the cadets’ current activities.

“I was particularly impressed by the full representation across the YOU member organisations, this was absolutely brilliant and the demonstration of the future through youth, a very fitting balance against 100 years of commemoration of those that served and sacrificed their lives to ensure peaceful futures for us all” Martin Coles, Chief Executive Marine Society and Sea Cadets

The Solemn Drumhead Service The Service took place in Figure Court attended by HM The Queen and HRH The Duke of Edinburgh, HRHs The Earl of Wessex, Prince Michael of Kent, Princess Alexandra, HIRH The Archduke von Oesterreich-Este and over 900 invited guests. Prior to the start of the Service, a contingent comprising The Honourable Artillery Company Band, HMS PRESIDENT, The Royal Yeomanry and the First Aid Nursing Yeomanry marched to the Court followed by a second contingent of The Pipes and Drums of the London Scottish and The London Regiment. Despite the rain, heavy at times, the service was a moving tribute to those who volunteered to serve in the First World War.

â&amp;#x20AC;&amp;#x153;What a fabulous occasion, the right balance of remembrance for those that had volunteered in the past with recognition of those that continue to do soâ&amp;#x20AC;? Commander John Herriman Royal Naval Reserve

Drumhead Service Introduction by the Bishop of London, the Right Reverend and Right Honourable Richard Chartres This is a unique occasion; a commemoration to the very day of the event which eventually detonated the First World War. The assassination in Sarajevo of the heir to the throne of Austria-Hungary, Archduke Franz Ferdinand and his wife, was not immediately recognised as the historic turning point it undoubtedly was. Europe had surmounted a number of crises in the preceding years and there were many people who agreed with ‘The Great Illusion’ the book published by Norman Angell in 1910 which argued that war in an inter-dependent international economy no longer made sense. Yet just after a month, at the beginning of August 1914, Europe was at war and the Armed Forces of the Crown, not only from Great Britain but from other realms and territories were called upon to make great sacrifices. We salute the courage of those who during the past hundred years have served under the British flag, especially those who volunteered from every part of London; we remember with sorrow, pride and gratitude those who have given their lives in the Great War and the other wars of the past century and we honour those from every part of our diverse community who have volunteered to serve in today’s Armed Forces. We commit ourselves to play our part in upholding justice and peace among the nations, ready to defend our country and to serve the common good.

“I found the ceremony at the Royal Hospital to be very moving. It is more than right to pay respects and remember those who have given their lives for their country” HIRH The Arch Duke von Oesterreich-Este 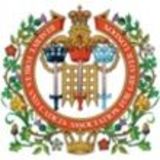