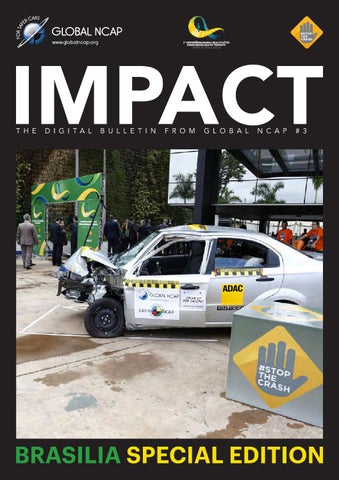 Global High Level Conference The 2nd Global High-Level Conference on Road Safety was held in Brasilia on 18-19 November and attended by over 2200 delegates from more than 110 countries, including 70 ministers of transport, health and interior. Keynote speakers in the opening plenary included President Dilma Rousseff of Brazil, Dr Margaret Chan, the Director of the World Health Organisation and Zoleka Mandela. The meeting adopted the Brasilia Declaration which confirmed support for the Global Goals target to halve of deaths and injuries caused by traffic crashes by 2020. The Declaration also contains strong commitments to vehicle safety calling for the mandatory fitment of airbags, anti-lock brakes and electronic stability control. Every year, traffic crashes kill 1.25 million people and injure around 50 million resulting in costs worlwide above US$ 1.85 trillion. Global NCAP held its Annual Meeting in Brasilia (15-17 November) and played a significant and high profile role in the High Level Conference. This special edition of Impact highlights our main activities during a very important week that marked the mid-point of the current UN Decade of Action for Road Safety.

Stop the crash In Brasilia Global NCAP launched its Stop the Crash Partnership. Featuring demonstrations of the most important crash avoidance technologies; electronic stability control, autonomous emergency braking, and anti-lock brakes in motorcycles, the event was attended by over 500 delegates and 64 journalists. Stop the Crash was opened by His Royal Highness Prince Michael of Kent, Gilberto Kassab, Minister of Cities of the Government of Brazil, Michael McCormack, Minister for Road Safety in Australia, Max Mosley, the Chairman of Global NCAP and Dr Mark Rosekind, Administrator of the National Highway Traffic Safety Administration. Led by Global NCAP, the Stop the Crash Partnership includes the ADAC, Autoliv, Bosch, Continental, Denso, Thatcham, ZF-TRW, and the Toward Zero Foundation. All are united in their shared commitment to promote advanced vehicle safety technologies in support of the UNâ&#x20AC;&#x2122;s Global Goals and the Decade of Action for Road Safety.

Global NCAP Annual Meeting Global NCAP held its 2015 Annual Meeting just before the High Level Conference in Brasilia. The meeting featured a Roundtable of updates from NCAPs around the world, our Advisory Council, and Annual Awards presentation. The meeting is a unique opportunity for NCAP’s to discuss best practice in consumer safety rating and share latest developments in their programmes. At the meeting Global NCAP approved an update to our ‘Democratising Car Safety: Road Map for Safer Cars 2020 report’ to include new recommendations for autonomous emergency braking and anti-lock brakes in motorcycles. The 2015 winners of Global NCAP’s Annual Awards were the European Parliament and Alan Donnelly as Consumer Champion and for Individual Achievement. Both awards recognised the life-saving impact of legislation for front and side impact crash tests adopted in 1995. The 2015 Innovation Award was presented to Adrian Lund of the Insurance Institute for Highway Safety in recognition of their development of the small overlap frontal crash test.

Five years of Latin NCAP In Brasilia Latin NCAP celebrated its fifth anniversary. The programme has now tested over sixty models and is transforming vehicle safety across the Latin American region. When Latin NCAP began in 2010 it was clear that the safety of many of the best selling cars lagged twenty years behind Europe and North America. Since then a growing number of manufacturers have engaged positively with Latin NCAP to improve occupant protection, with six manufacturers having now achieved a five star rating for some of their models. To mark its fifth anniversary Latin NCAP has published a ranking of the comparative safety performance of car manufacturers in the Latin American market. The survey reveals that six manufacturers average four stars or more but GMâ&#x20AC;&#x2122;s Chevrolet is the worst performing global brand. New crash test results also released in Brasilia saw Honda receiving three five star awards but GMâ&#x20AC;&#x2122;s Chevy Aveo in Mexico receiving a disappointing zero star score. The launch of the GM results was widely reported in the Latin American region and internationally in the Financial Times and the Economist: http://econ.st/1ImkczX http://on.ft.com/1l9pGc2

SPEAK UP FOR SAFETY! Coinciding with the Brasilia Conference Global NCAP has launched a new #nozerostarcars campaign in support of our Democratising Car Safety: Road Map for Safer Cars 2020 report. This initiative aims to discourage manufacturers from continuing to offer for sale cars that perform so badly in NCAP crash tests that they score zero stars. At this level vehicles would almost certainly fail to pass the UNâ&#x20AC;&#x2122;s minimum crash test standards. An example of a zero star car, GMâ&#x20AC;&#x2122;s Chevy Aveo, from Mexico was displayed at the entrance to the Global High Level Conference encouraging many delegates to support the #nozerostarcars campaign.

SPEAK UP FOR SAFEY!

Prince Michael Awards At a special ceremony in Brasilia Global NCAPâ&#x20AC;&#x2122;s key partner Latin NCAP received the prestigious HRH Prince Michael International Road Safety Award. Nani Rodriguez, the Programme Chair, and Alejandro Furas, their Secretary General received this well-deserved award from HRH Prince Michael of Kent amidst warm applause from the large audience. A special award was also given by the Prince to Lord Robertson in recognition of the work of the Commission for Global Road Safety which played a major role in the establishment of the UN Decade of Action. Global NCAPâ&#x20AC;&#x2122;s Secretary General has served as Executive Secretary of the Commission since its launch in 2006.

Consumers International World Congress In parallel to the High Level Conference, Consumers International (CI), the umbrella body of consumer groups, held their World Congress in Brasilia. Delegates from CI participated in Global NCAP’s Stop the Crash demonstrations and also supported our #nozerostarcars campaign. A special session of the CI World Congress was held on car safety at which Global NCAP’s Secretary General spoke together with Euro NCAP’s Treasurer Guido Adriaenssens. Fifty years ago in November 1965 Nader Ralph, the pioneer of consumer rights and car safety, published his ground breaking report ‘Unsafe at Any Speed’ which has transformed attitudes to vehicle safety regulation firstly in the US but eventually around the world. It was, therefore, highly appropriate that Nader, in response to the latest Latin NCAP results, issued a fresh warning against double standards being applied to cars sold in the US and developing countries.

Safer Vehicles During the Global High level Conference a parallel session was held on safer vehicles moderated by Global NCAPâ&#x20AC;&#x2122;s Secretary General David Ward. The WHO Global Road Safety Status Report 2015 assessment of vehicle safety issues served as the starting point for a wide ranging discussion on the priority actions needed to promote safer vehicles particularly in low and middle income countries. The complimentary role of regulatory push and demand pull measures to raise levels of vehicle safety was highlighted together with the benefits of greater use of the most important safety regulations available through the UN World Forum for Harmonisation on Vehicle Regulations and the development of New Car Assessment Programmes in all world regions. The vehicle safety related content of the proposed Brasilia Declaration was also strongly welcomed.

fleet safety A side event at the Conference discussed the role of fleet safety managers in purchasing, operating, and maintaining vehicles to encourage best performance in road injury prevention. Chaired by Alejandro Furas, the Secretary General of Latin NCAP the meeting examined best practice in promoting in road casualty reduction in both public and private transport fleets. Global NCAPâ&#x20AC;&#x2122;s Secretary General David Ward highlighted our guidelines for safer vehicle purchasing which recommend choosing vehicles rated by NCAPâ&#x20AC;&#x2122;s as five stars wherever possible. In line with this approach the Brazilian Fleet Manager Association announced a commitment among its key members only to purchase vehicles that exceed four or five stars in Latin NCAP ratings and require the fitment of the crash avoidance technology electronic stability control. 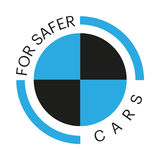