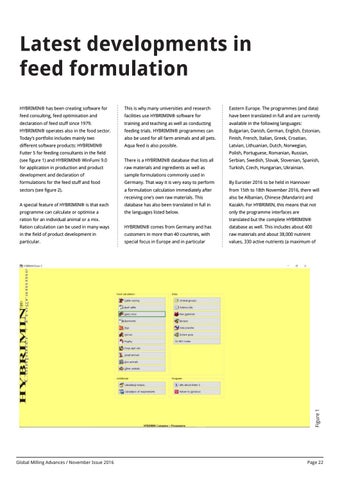 Latest developments in feed formulation HYBRIMIN® has been creating software for

This is why many universities and research

Eastern Europe. The programmes (and data)

facilities use HYBRIMIN® software for

have been translated in full and are currently

declaration of feed stuff since 1979.

training and teaching as well as conducting

available in the following languages:

also be used for all farm animals and all pets.

Futter 5 for feeding consultants in the field

There is a HYBRIMIN® database that lists all

for application in production and product

raw materials and ingredients as well as

development and declaration of

formulations for the feed stuff and food

Germany. That way it is very easy to perform

By Eurotier 2016 to be held in Hannover

a formulation calculation immediately after

receiving one’s own raw materials. This

also be Albanian, Chinese (Mandarin) and

A special feature of HYBRIMIN® is that each

database has also been translated in full in

Kazakh. For HYBRIMIN, this means that not

programme can calculate or optimise a

the languages listed below.

only the programme interfaces are

ration for an individual animal or a mix.

translated but the complete HYBRIMIN®

Ration calculation can be used in many ways

HYBRIMIN® comes from Germany and has

database as well. This includes about 400

in the field of product development in

customers in more than 40 countries, with

raw materials and about 38,000 nutrient

special focus in Europe and in particular

values, 330 active nutrients (a maximum of

This month we get to know about the impact that mycotoxins may have on stored grains, and potential mycotoxin problems and solutions for this year's grain harvest. We learn about measuring α-amylase activity - a process crucial for making high quality flour. We take a look at the software products for feed consulting and optimisation developed by HYBRIMIN, feed formulation software from AFOS, and a new flaking roller mill developed by Bühler. We get an insight into the products and operations of Mathews Company, a global supplier of agricultural equipment, from the company’s President - Joseph Shulfer. Finally, we learn more about the upcoming tradeshow for poultry brands and companies - VIV Turkey 2017. 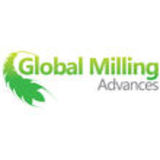