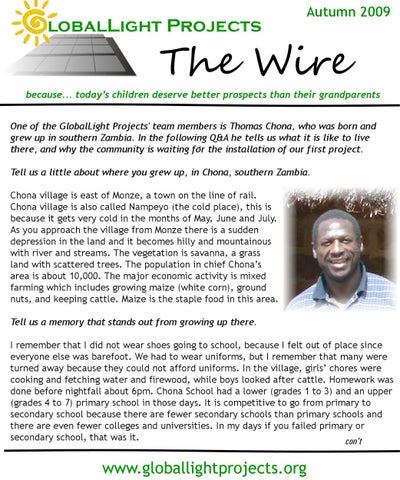 One of the GlobalLight Projects&#39; team members is Thomas Chona, who was born and grew up in southern Zambia. In the following Q&amp;A he tells us what it is like to live there, and why the community is waiting for the installation of our first project. Tell us a little about where you grew up, in Chona, southern Zambia. Chona village is east of Monze, a town on the line of rail. Chona village is also called Nampeyo (the cold place), this is because it gets very cold in the months of May, June and July. As you approach the village from Monze there is a sudden depression in the land and it becomes hilly and mountainous with river and streams. The vegetation is savanna, a grass land with scattered trees. The population in chief Chonaâ&amp;#x20AC;&amp;#x2122;s area is about 10,000. The major economic activity is mixed farming which includes growing maize (white corn), ground nuts, and keeping cattle. Maize is the staple food in this area. Tell us a memory that stands out from growing up there. I remember that I did not wear shoes going to school, because I felt out of place since everyone else was barefoot. We had to wear uniforms, but I remember that many were turned away because they could not afford uniforms. In the village, girlsâ&amp;#x20AC;&amp;#x2122; chores were cooking and fetching water and firewood, while boys looked after cattle. Homework was done before nightfall about 6pm. Chona School had a lower (grades 1 to 3) and an upper (grades 4 to 7) primary school in those days. It is competitive to go from primary to secondary school because there are fewer secondary schools than primary schools and there are even fewer colleges and universities. In my days if you failed primary or secondary school, that was it.

Interview with Thomas Chona continued from page 1 By the time I was finished grade 7 some of the school buildings had collapsed. In my grade 7 class there were about 24 students. Only myself and the brother of one of the teachers passed to go to secondary school. Having only two students advancing to secondary school was not surprising; the year before only one girl had passed. Unfortunately this trend has continued to date. How have things changed there since you were a child? Before, there was a total of eight classrooms and the school went from grade 1 to grade 7. Now there are six classrooms and the school goes from grade 1 to grade 9. So the school has reduced in size but increased the number of students. The quality of education has not changed judging by the number of students going to secondary school. Most of my former classmates have died of HIV/AIDS, therefore many of todayâ&amp;#x20AC;&amp;#x2122;s students are orphans. When I was young, very few people in my class had lost a parent where now it is unusual to have a class without orphans due to HIV/AIDS. The number of teachers in my time was not an issue. However, when I visited the school in 2006, there were four teachers teaching nine grades. The headmaster told me that ideally the school that size should have had at least 11 teachers. So at that time the school had 36% of the required number of teachers, indicating that a rural school is not a good work place for a teacher. What are the biggest challenges to people in the village? There are various challenges for the people in the village I would list them as: ~Disease (HIV/AIDS, malaria, etc) ~Education ~Clean water ~Poverty

Many children in Zambia are being raised by their grandparents because of HIV/AIDS.

Why is electrifying the school important? Electric power will provide lighting to enable school buildings to be used both day and night. This will improve the life in the community via education. Electricity will power computers, tools that will increase the quality of education. Students have never seen a bunsen burner, test tube or Petri dish but with electricity they can watch how things are done using a TV/VCR/DVD. An electric water pump would improve the health of the students who currently share the contaminated water supply in streams and rivers with cattle. Electricity will improve the irrigation methods of the gardens for the young farmersâ&amp;#x20AC;&amp;#x2122; club. A work shop with electric tools can be setup to make benches and chairs for the school, communication equipment can be installed to literally bring the school online with the rest of the world. Electricity is one of the most important development tools in rural areas. How can people get involved? The means to improve lives exists. What often is lacking is the will to take what we have and share it. GlobalLight Projects was formed to help bridge the gap between those who can share and those who need help. We invite you to get involved to help us get the first project going. Please consider completing and returning the enclosed response card. You will help change a whole community.

A Look At Zambia Zambia is a landlocked country in sub-Saharan Africa. Formerly the territory of Northern Rhodesia, Zambia clamed independance in 1964. The population is 11.8 million people. Severe mortality due to HIV/AIDS threatens the population with over one million adults diagnosed with the disease. Life expectanacy is one of the lowest in the world at only 38 years. Fifty percent of the population is unemployed and 86% of the people live below the poverty line with an average annual income of $395. Historically, the mining of copper has been the base of Zambia&#39;s economy with dependance on world market prices. The present govenment is striving to increase export of other metals such as nickel, tin, and uranium to prevent reliance on the copper industry. Potential markets also include agriculture, tourism, gemstone mining and hydro-electric power. The capital of Zambia is Lusaka with a population of three million people. The country is divided into nine provinces with the majority of the population living in urban areas and the northern copper belt. Only seven percent of the land is cultivated for crops and most rural Zambians only grow enough food for their own family to survive. The original Bantu (African) cultures have survived in the rural areas. In the urban setting there is a merging of the indiginious culture with European influences to produce what is now called the Zambian culture. The traditional arts of pottery, weaving, carving and wire craft are maintained. Drums and percussion instruments provide traditional music. Maize is the diet staple eaten as a thick porrage sometimes with vegetables and beans.