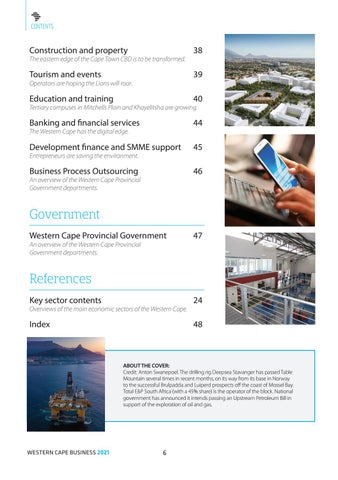 The eastern edge of the Cape Town CBD is to be transformed. Operators are hoping the Lions will roar.

Tertiary campuses in Mitchells Plain and Khayelitsha are growing. The Western Cape has the digital edge.

Entrepreneurs are saving the environment.

An overview of the Western Cape Provincial Government departments.

Overviews of the main economic sectors of the Western Cape.

ABOUT THE COVER: Credit: Anton Swanepoel. The drilling rig Deepsea Stavanger has passed Table Mountain several times in recent months, on its way from its base in Norway to the successful Brulpadda and Luiperd prospects off the coast of Mossel Bay. Total E&P South Africa (with a 45% share) is the operator of the block. National government has announced it intends passing an Upstream Petroleum Bill in support of the exploration of oil and gas.