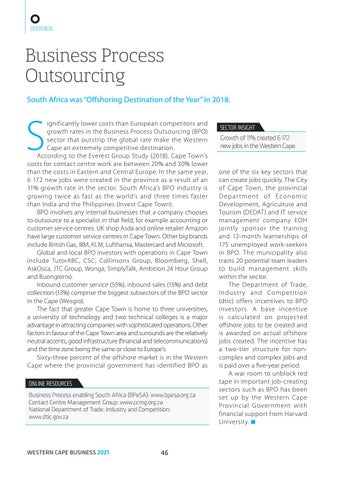 Business Process Outsourcing South Africa was “Offshoring Destination of the Year” in 2018.

ignificantly lower costs than European competitors and growth rates in the Business Process Outsourcing (BPO) sector that outstrip the global rate make the Western Cape an extremely competitive destination. According to the Everest Group Study (2018), Cape Town’s costs for contact centre work are between 20% and 30% lower than the costs in Eastern and Central Europe. In the same year, 6 172 new jobs were created in the province as a result of an 11% growth rate in the sector. South Africa’s BPO industry is growing twice as fast as the world’s and three times faster than India and the Philippines (Invest Cape Town). BPO involves any internal businesses that a company chooses to outsource to a specialist in that field, for example accounting or customer service centres. UK shop Asda and online retailer Amazon have large customer service centres in Cape Town. Other big brands include British Gas, IBM, KLM, Lufthansa, Mastercard and Microsoft. Global and local BPO investors with operations in Cape Town include TutorABC, CSC, Collinsons Group, Bloomberg, Shell, AskOsca, JTC Group, Wonga, SimplyTalk, Ambition 24 Hour Group and Buongiorno. Inbound customer service (55%), inbound sales (15%) and debt collection (13%) comprise the biggest subsectors of the BPO sector in the Cape (Wesgro). The fact that greater Cape Town is home to three universities, a university of technology and two technical colleges is a major advantage in attracting companies with sophisticated operations. Other factors in favour of the Cape Town area and surrounds are the relatively neutral accents, good infrastructure (financial and telecommunications) and the time zone being the same or close to Europe’s. Sixty-three percent of the offshore market is in the Western Cape where the provincial government has identified BPO as

one of the six key sectors that can create jobs quickly. The City of Cape Town, the provincial D e p a r t m e nt o f E co n o m i c Development, Agriculture and Tourism (DEDAT) and IT service management company EOH jointly sponsor the training and 12-month learnerships of 175 unemployed work-seekers in BPO. The municipality also trains 20 potential team leaders to build management skills within the sector. The Department of Trade, Indus tr y and Comp etition (dtic) offers incentives to BPO investors. A base incentive is calculated on projec ted offshore jobs to be created and is awarded on actual offshore jobs created. The incentive has a two-tier structure for noncomplex and complex jobs and is paid over a five-year period. A war room to unblock red tape in important job-creating sectors such as BPO has been set up by the Western Cape Provincial Government with financial support from Harvard University. ■