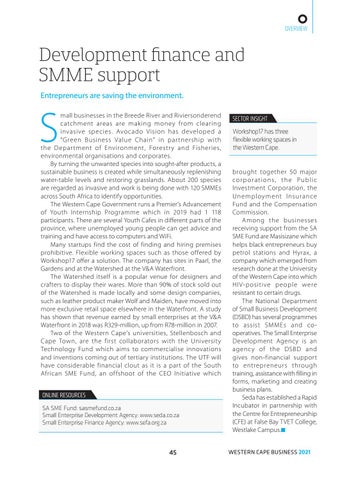 Development finance and SMME support Entrepreneurs are saving the environment.

mall businesses in the Breede River and Riviersonderend catchment areas are making money from clearing invasive species. Avocado Vision has developed a “Green Business Value Chain” in par tnership with the Depar tment of Environment, Forestr y and Fisheries, environmental organisations and corporates. By turning the unwanted species into sought-after products, a sustainable business is created while simultaneously replenishing water-table levels and restoring grasslands. About 200 species are regarded as invasive and work is being done with 120 SMMEs across South Africa to identify opportunities. The Western Cape Government runs a Premier’s Advancement of Youth Internship Programme which in 2019 had 1 118 participants. There are several Youth Cafes in different parts of the province, where unemployed young people can get advice and training and have access to computers and WiFi. Many startups find the cost of finding and hiring premises prohibitive. Flexible working spaces such as those offered by Workshop17 offer a solution. The company has sites in Paarl, the Gardens and at the Watershed at the V&A Waterfront. The Watershed itself is a popular venue for designers and crafters to display their wares. More than 90% of stock sold out of the Watershed is made locally and some design companies, such as leather product maker Wolf and Maiden, have moved into more exclusive retail space elsewhere in the Waterfront. A study has shown that revenue earned by small enterprises at the V&A Waterfront in 2018 was R329-million, up from R78-million in 2007. Two of the Western Cape’s universities, Stellenbosch and Cape Town, are the first collaborators with the University Technology Fund which aims to commercialise innovations and inventions coming out of tertiary institutions. The UTF will have considerable financial clout as it is a part of the South African SME Fund, an of fshoot of the CEO Initiative which

SECTOR INSIGHT Workshop17 has three flexible working spaces in the Western Cape. brought together 50 major co r p o r a t i o n s , t h e Pu b l i c Investment Corporation, the Un emp loy m ent Insur ance Fund and the Compensation Commission. Among the businesses receiving support from the SA SME Fund are Masisizane which helps black entrepreneurs buy petrol stations and Hyrax, a company which emerged from research done at the University of the Western Cape into which HIV-positive people were resistant to certain drugs. The National Department of Small Business Development (DSBD) has several programmes to assist SMMEs and co operatives. The Small Enterprise Development Agency is an agenc y of the DSBD and gives non-financial support to entrepreneurs through training, assistance with filling in forms, marketing and creating business plans. Seda has established a Rapid Incubator in partnership with the Centre for Entrepreneurship (CFE) at False Bay TVET College, Westlake Campus.■ WESTERN CAPE BUSINESS 2021