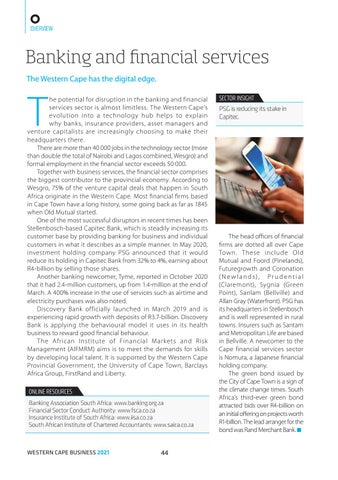 Banking and financial services The Western Cape has the digital edge.

he potential for disruption in the banking and financial services sector is almost limitless. The Western Cape’s evolution into a technology hub helps to explain why banks, insurance providers, asset managers and venture capitalists are increasingly choosing to make their headquarters there. There are more than 40 000 jobs in the technology sector (more than double the total of Nairobi and Lagos combined, Wesgro) and formal employment in the financial sector exceeds 50 000. Together with business services, the financial sector comprises the biggest contributor to the provincial economy. According to Wesgro, 75% of the venture capital deals that happen in South Africa originate in the Western Cape. Most financial firms based in Cape Town have a long history, some going back as far as 1845 when Old Mutual started. One of the most successful disruptors in recent times has been Stellenbosch-based Capitec Bank, which is steadily increasing its customer base by providing banking for business and individual customers in what it describes as a simple manner. In May 2020, investment holding company PSG announced that it would reduce its holding in Capitec Bank from 32% to 4%, earning about R4-billion by selling those shares. Another banking newcomer, Tyme, reported in October 2020 that it had 2.4-million customers, up from 1.4-million at the end of March. A 400% increase in the use of services such as airtime and electricity purchases was also noted. Discovery Bank officially launched in March 2019 and is experiencing rapid growth with deposits of R3.7-billion. Discovery Bank is applying the behavioural model it uses in its health business to reward good financial behaviour. The African Institute of Financial Markets and Risk Management (AIFMRM) aims is to meet the demands for skills by developing local talent. It is supported by the Western Cape Provincial Government, the University of Cape Town, Barclays Africa Group, FirstRand and Liberty.

SECTOR INSIGHT PSG is reducing its stake in Capitec.

The head offices of financial firms are dotted all over Cape Town. These include Old Mutual and Foord (Pinelands), Futuregrowth and Coronation (N ew lan ds), Pr u d ential (Claremont), Sygnia (Green Point), Sanlam (Bellville) and Allan Gray (Waterfront). PSG has its headquarters in Stellenbosch and is well represented in rural towns. Insurers such as Santam and Metropolitan Life are based in Bellville. A newcomer to the Cape financial services sector is Nomura, a Japanese financial holding company. The green bond issued by the City of Cape Town is a sign of the climate change times. South Africa’s third-ever green bond attracted bids over R4-billion on an initial offering on projects worth R1-billion. The lead arranger for the bond was Rand Merchant Bank. ■