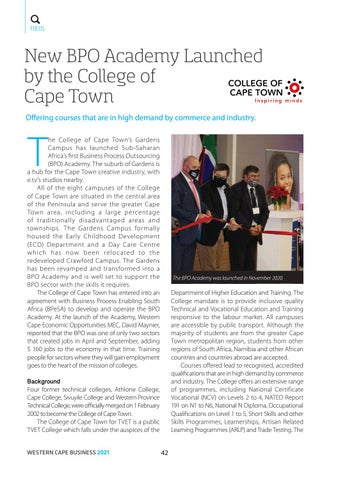 New BPO Academy Launched by the College of Cape Town Offering courses that are in high demand by commerce and industry.

he College of Cape Town’s Gardens Campus has launched Sub-Saharan Africa’s first Business Process Outsourcing (BPO) Academy. The suburb of Gardens is a hub for the Cape Town creative industry, with e.tv’s studios nearby. All of the eight campuses of the College of Cape Town are situated in the central area of the Peninsula and serve the greater Cape Town area, including a large percentage of traditionally disadvantaged areas and townships. The Gardens Campus formally housed the Early Childhood Development (ECD) Depar tment and a Day Care Centre which has now b e en relo c ate d to th e redeveloped Crawford Campus. The Gardens has been revamped and transformed into a BPO Academy and is well set to support the BPO sector with the skills it requires. The College of Cape Town has entered into an agreement with Business Process Enabling South Africa (BPeSA) to develop and operate the BPO Academy. At the launch of the Academy, Western Cape Economic Opportunities MEC, David Maynier, reported that the BPO was one of only two sectors that created jobs in April and September, adding 5 160 jobs to the economy in that time. Training people for sectors where they will gain employment goes to the heart of the mission of colleges.

The BPO Academy was launched in November 2020.

Department of Higher Education and Training. The College mandate is to provide inclusive quality Technical and Vocational Education and Training responsive to the labour market. All campuses are accessible by public transport. Although the majority of students are from the greater Cape Town metropolitan region, students from other regions of South Africa, Namibia and other African countries and countries abroad are accepted. Courses offered lead to recognised, accredited qualifications that are in high demand by commerce and industry. The College offers an extensive range of programmes, including National Certificate Vocational (NCV) on Levels 2 to 4, NATED Report 191 on N1 to N6, National N Diploma, Occupational Qualifications on Level 1 to 5, Short Skills and other Skills Programmes, Learnerships, Artisan Related Learning Programmes (ARLP) and Trade Testing. The