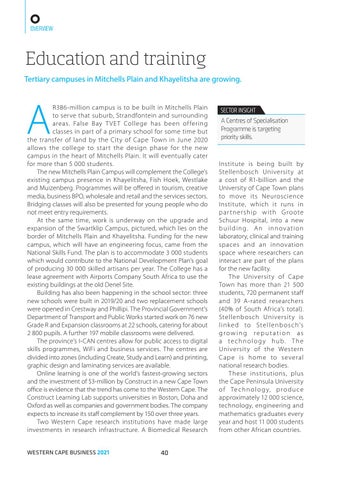 Education and training Tertiary campuses in Mitchells Plain and Khayelitsha are growing.

R386-million campus is to be built in Mitchells Plain to serve that suburb, Strandfontein and surrounding areas. False Bay T VE T College has been of fering classes in part of a primary school for some time but the transfer of land by the City of Cape Town in June 2020 allows the college to star t the design phase for the new campus in the heart of Mitchells Plain. It will eventually cater for more than 5 000 students. The new Mitchells Plain Campus will complement the College’s existing campus presence in Khayelitsha, Fish Hoek, Westlake and Muizenberg. Programmes will be offered in tourism, creative media, business BPO, wholesale and retail and the services sectors. Bridging classes will also be presented for young people who do not meet entry requirements. At the same time, work is underway on the upgrade and expansion of the Swartklip Campus, pictured, which lies on the border of Mitchells Plain and Khayelitsha. Funding for the new campus, which will have an engineering focus, came from the National Skills Fund. The plan is to accommodate 3 000 students which would contribute to the National Development Plan’s goal of producing 30 000 skilled artisans per year. The College has a lease agreement with Airports Company South Africa to use the existing buildings at the old Denel Site. Building has also been happening in the school sector: three new schools were built in 2019/20 and two replacement schools were opened in Crestway and Phillipi. The Provincial Government’s Department of Transport and Public Works started work on 76 new Grade R and Expansion classrooms at 22 schools, catering for about 2 800 pupils. A further 197 mobile classrooms were delivered. The province’s I-CAN centres allow for public access to digital skills programmes, WiFi and business services. The centres are divided into zones (including Create, Study and Learn) and printing, graphic design and laminating services are available. Online learning is one of the world’s fastest-growing sectors and the investment of $3-million by Construct in a new Cape Town office is evidence that the trend has come to the Western Cape. The Construct Learning Lab supports universities in Boston, Doha and Oxford as well as companies and government bodies. The company expects to increase its staff complement by 150 over three years. Two Western Cape research institutions have made large investments in research infrastructure. A Biomedical Research

Institute is being built by Stellenbosch Universit y at a cost of R1-billion and the University of Cape Town plans to move its Neuroscience Institute, which it runs in p ar t n e r ship w i t h G ro ote Schuur Hospital, into a new building. An innovation laboratory, clinical and training spaces and an innovation space where researchers can interact are part of the plans for the new facility. The Universit y of Cape Town has more than 21 500 students, 720 permanent staff and 39 A-rated researchers (40% of South Africa’s total). Stellenbosch Universit y is l i n k e d to Ste l l e n b o s c h’s growing reputation as a technology hub. The Universit y of the Western Cap e is home to several national research bodies. These institutions, plus the Cape Peninsula University o f Te c h n o l o g y, p r o d u c e approximately 12 000 science, technology, engineering and mathematics graduates every year and host 11 000 students from other African countries.