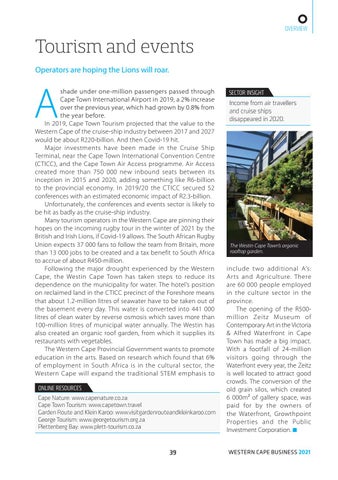 Tourism and events Operators are hoping the Lions will roar.

shade under one-million passengers passed through Cape Town International Airport in 2019, a 2% increase over the previous year, which had grown by 0.8% from the year before. In 2019, Cape Town Tourism projected that the value to the Western Cape of the cruise-ship industry between 2017 and 2027 would be about R220-billion. And then Covid-19 hit. Major investments have been made in the Cruise Ship Terminal, near the Cape Town International Convention Centre (CTICC), and the Cape Town Air Access programme. Air Access created more than 750 000 new inbound seats between its inception in 2015 and 2020, adding something like R6-billion to the provincial economy. In 2019/20 the CTICC secured 52 conferences with an estimated economic impact of R2.3-billion. Unfortunately, the conferences and events sector is likely to be hit as badly as the cruise-ship industry. Many tourism operators in the Western Cape are pinning their hopes on the incoming rugby tour in the winter of 2021 by the British and Irish Lions, if Covid-19 allows. The South African Rugby Union expects 37 000 fans to follow the team from Britain, more than 13 000 jobs to be created and a tax benefit to South Africa to accrue of about R450-million. Following the major drought experienced by the Western Cape, the Westin Cape Town has taken steps to reduce its dependence on the municipality for water. The hotel’s position on reclaimed land in the CTICC precinct of the Foreshore means that about 1.2-million litres of seawater have to be taken out of the basement every day. This water is converted into 441 000 litres of clean water by reverse osmosis which saves more than 100-million litres of municipal water annually. The Westin has also created an organic roof garden, from which it supplies its restaurants with vegetables. The Western Cape Provincial Government wants to promote education in the arts. Based on research which found that 6% of employment in South Africa is in the cultural sector, the Western Cape will expand the traditional STEM emphasis to

include two additional A’s: Arts and Agriculture. There are 60 000 people employed in the culture sector in the province. The opening of the R500million Zeitz Museum of Contemporary Art in the Victoria & Alfred Waterfront in Cape Town has made a big impact. With a footfall of 24-million visitors going through the Waterfront every year, the Zeitz is well located to attract good crowds. The conversion of the old grain silos, which created 6 000m² of gallery space, was paid for by the owners of the Waterfront, Growthpoint Properties and the Public Investment Corporation. ■ WESTERN CAPE BUSINESS 2021