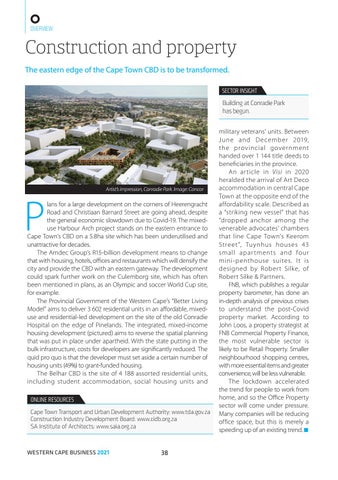 Construction and property The eastern edge of the Cape Town CBD is to be transformed. SECTOR INSIGHT Building at Conradie Park has begun.

lans for a large development on the corners of Heerengracht Road and Christiaan Barnard Street are going ahead, despite the general economic slowdown due to Covid-19. The mixeduse Harbour Arch project stands on the eastern entrance to Cape Town’s CBD on a 5.8ha site which has been underutilised and unattractive for decades. The Amdec Group’s R15-billion development means to change that with housing, hotels, offices and restaurants which will densify the city and provide the CBD with an eastern gateway. The development could spark further work on the Culemborg site, which has often been mentioned in plans, as an Olympic and soccer World Cup site, for example. The Provincial Government of the Western Cape’s “Better Living Model” aims to deliver 3 602 residential units in an affordable, mixeduse and residential-led development on the site of the old Conradie Hospital on the edge of Pinelands. The integrated, mixed-income housing development (pictured) aims to reverse the spatial planning that was put in place under apartheid. With the state putting in the bulk infrastructure, costs for developers are significantly reduced. The quid pro quo is that the developer must set aside a certain number of housing units (49%) to grant-funded housing. The Belhar CBD is the site of 4 188 assorted residential units, including student accommodation, social housing units and

military veterans’ units. Between June and D e cemb er 2019, the provincial government handed over 1 144 title deeds to beneficiaries in the province. An ar ticle in Visi in 2020 heralded the arrival of Art Deco accommodation in central Cape Town at the opposite end of the affordability scale. Described as a “striking new vessel” that has “dropped anchor among the venerable advocates’ chambers that line Cape Town’s Keerom Street ”, Tuynhus houses 43 small apar tment s and four mini-penthouse suites. It is designed by Rober t Silke, of Robert Silke & Partners. FNB, which publishes a regular property barometer, has done an in-depth analysis of previous crises to understand the post-Covid property market. According to John Loos, a property strategist at FNB Commercial Property Finance, the most vulnerable sector is likely to be Retail Property. Smaller neighbourhood shopping centres, with more essential items and greater convenience, will be less vulnerable. The lockdown accelerated the trend for people to work from home, and so the Office Property sector will come under pressure. Many companies will be reducing office space, but this is merely a speeding up of an existing trend. ■