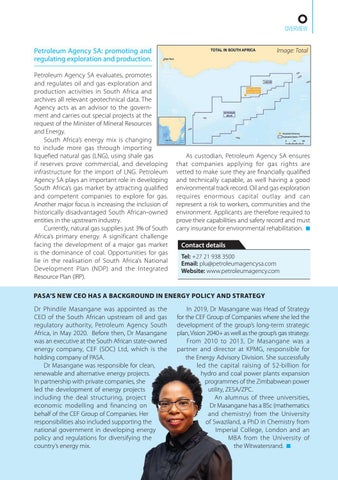 Petroleum Agency SA: promoting and regulating exploration and production. Petroleum Agency SA evaluates, promotes and regulates oil and gas exploration and production activities in South Africa and archives all relevant geotechnical data. The Agency acts as an advisor to the government and carries out special projects at the request of the Minister of Mineral Resources and Energy. South Africa’s energy mix is changing to include more gas through importing liquefied natural gas (LNG), using shale gas if reserves prove commercial, and developing infrastructure for the import of LNG. Petroleum Agency SA plays an important role in developing South Africa’s gas market by attracting qualified and competent companies to explore for gas. Another major focus is increasing the inclusion of historically disadvantaged South African-owned entities in the upstream industry. Currently, natural gas supplies just 3% of South Africa’s primary energy. A significant challenge facing the development of a major gas market is the dominance of coal. Opportunities for gas lie in the realisation of South Africa’s National Development Plan (NDP) and the Integrated Resource Plan (IRP).

As custodian, Petroleum Agency SA ensures that companies applying for gas rights are vetted to make sure they are financially qualified and technically capable, as well having a good environmental track record. Oil and gas exploration requires enormous capital outlay and can represent a risk to workers, communities and the environment. Applicants are therefore required to prove their capabilities and safety record and must carry insurance for environmental rehabilitation. ■

PASA’S NEW CEO HAS A BACKGROUND IN ENERGY POLICY AND STRATEGY Dr Phindile Masangane was appointed as the CEO of the South African upstream oil and gas regulatory authority, Petroleum Agency South Africa, in May 2020. Before then, Dr Masangane was an executive at the South African state-owned energy company, CEF (SOC) Ltd, which is the holding company of PASA. Dr Masangane was responsible for clean, renewable and alternative energy projects. In partnership with private companies, she led the development of energy projects including the deal structuring, project economic modelling and financing on behalf of the CEF Group of Companies. Her responsibilities also included supporting the national government in developing energy policy and regulations for diversifying the country’s energy mix.

In 2019, Dr Masangane was Head of Strategy for the CEF Group of Companies where she led the development of the group’s long-term strategic plan, Vision 2040+ as well as the group’s gas strategy. From 2010 to 2013, Dr Masangane was a partner and director at KPMG, responsible for the Energy Advisory Division. She successfully led the capital raising of $2-billion for hydro and coal power plants expansion programmes of the Zimbabwean power utility, ZESA/ZPC. An alumnus of three universities, Dr Masangane has a BSc (mathematics and chemistry) from the University of Swaziland, a PhD in Chemistry from Imperial College, London and an MBA from the University of the Witwatersrand. ■