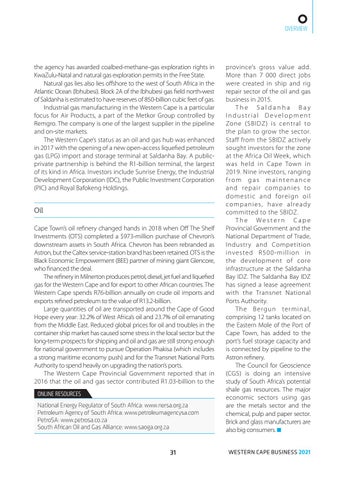 the agency has awarded coalbed-methane-gas exploration rights in KwaZulu-Natal and natural gas exploration permits in the Free State. Natural gas lies also lies offshore to the west of South Africa in the Atlantic Ocean (Ibhubesi). Block 2A of the Ibhubesi gas field north-west of Saldanha is estimated to have reserves of 850-billion cubic feet of gas. Industrial gas manufacturing in the Western Cape is a particular focus for Air Products, a part of the Metkor Group controlled by Remgro. The company is one of the largest supplier in the pipeline and on-site markets. The Western Cape’s status as an oil and gas hub was enhanced in 2017 with the opening of a new open-access liquefied petroleum gas (LPG) import and storage terminal at Saldanha Bay. A publicprivate partnership is behind the R1-billion terminal, the largest of its kind in Africa. Investors include Sunrise Energy, the Industrial Development Corporation (IDC), the Public Investment Corporation (PIC) and Royal Bafokeng Holdings.

Oil Cape Town’s oil refinery changed hands in 2018 when Off The Shelf Investments (OTS) completed a $973-million purchase of Chevron’s downstream assets in South Africa. Chevron has been rebranded as Astron, but the Caltex service-station brand has been retained. OTS is the Black Economic Empowerment (BEE) partner of mining giant Glencore, who financed the deal. The refinery in Milnerton produces petrol, diesel, jet fuel and liquefied gas for the Western Cape and for export to other African countries. The Western Cape spends R76-billion annually on crude oil imports and exports refined petroleum to the value of R13.2-billion. Large quantities of oil are transported around the Cape of Good Hope every year: 32.2% of West Africa’s oil and 23.7% of oil emanating from the Middle East. Reduced global prices for oil and troubles in the container ship market has caused some stress in the local sector but the long-term prospects for shipping and oil and gas are still strong enough for national government to pursue Operation Phakisa (which includes a strong maritime economy push) and for the Transnet National Ports Authority to spend heavily on upgrading the nation’s ports. The Western Cape Provincial Government reported that in 2016 that the oil and gas sector contributed R1.03-billion to the

province’s gross value add. More than 7 000 direct jobs were created in ship and rig repair sector of the oil and gas business in 2015. The Saldanha Bay Industrial Development Zone (SBIDZ) is central to the plan to grow the sector. Staff from the SBIDZ actively sought investors for the zone at the Africa Oil Week, which was held in Cape Town in 2019. Nine investors, ranging from gas maintenance a n d re p a i r c o m p a n i e s to domest ic and foreign oil c o m p a n i e s, h a v e a l re a d y committed to the SBIDZ. The Western Cape Provincial Government and the National Department of Trade, Industr y and Competition invested R500-million in the development of core infrastructure at the Saldanha Bay IDZ. The Saldanha Bay IDZ has signed a lease agreement with the Transnet National Ports Authority. The B ergu n ter minal, comprising 12 tanks located on the Eastern Mole of the Port of Cape Town, has added to the port’s fuel storage capacity and is connected by pipeline to the Astron refinery. The Council for Geoscience (CGS) is doing an intensive study of South Africa’s potential shale gas resources. The major economic sectors using gas are the metals sector and the chemical, pulp and paper sector. Brick and glass manufacturers are also big consumers. ■ WESTERN CAPE BUSINESS 2021