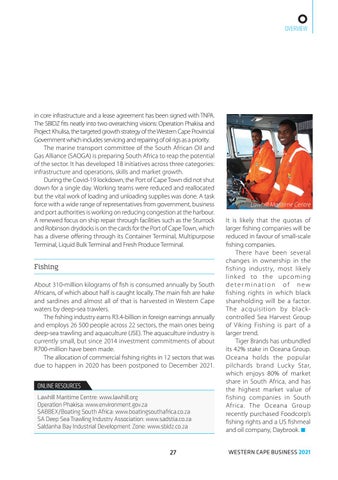 in core infrastructure and a lease agreement has been signed with TNPA. The SBIDZ fits neatly into two overarching visions: Operation Phakisa and Project Khulisa, the targeted growth strategy of the Western Cape Provincial Government which includes servicing and repairing of oil rigs as a priority. The marine transport committee of the South African Oil and Gas Alliance (SAOGA) is preparing South Africa to reap the potential of the sector. It has developed 18 initiatives across three categories: infrastructure and operations, skills and market growth. During the Covid-19 lockdown, the Port of Cape Town did not shut down for a single day. Working teams were reduced and reallocated but the vital work of loading and unloading supplies was done. A task force with a wide range of representatives from government, business and port authorities is working on reducing congestion at the harbour. A renewed focus on ship repair through facilities such as the Sturrock and Robinson drydocks is on the cards for the Port of Cape Town, which has a diverse offering through its Container Terminal, Multipurpose Terminal, Liquid Bulk Terminal and Fresh Produce Terminal.

Fishing About 310-million kilograms of fish is consumed annually by South Africans, of which about half is caught locally. The main fish are hake and sardines and almost all of that is harvested in Western Cape waters by deep-sea trawlers. The fishing industry earns R3.4-billion in foreign earnings annually and employs 26 500 people across 22 sectors, the main ones being deep-sea trawling and aquaculture (JSE). The aquaculture industry is currently small, but since 2014 investment commitments of about R700-million have been made. The allocation of commercial fishing rights in 12 sectors that was due to happen in 2020 has been postponed to December 2021.

Lawhill Maritime Centre It is likely that the quotas of larger fishing companies will be reduced in favour of small-scale fishing companies. There have been several changes in ownership in the fishing industry, most likely link ed to the upcoming determination of new fishing rights in which black shareholding will be a factor. The acquisition by blackcontrolled Sea Harvest Group of Viking Fishing is part of a larger trend. Tiger Brands has unbundled its 42% stake in Oceana Group. Oceana holds the popular pilchards brand Lucky Star, which enjoys 80% of market share in South Africa, and has the highest market value of fishing companies in South Africa. The Oceana Group recently purchased Foodcorp’s fishing rights and a US fishmeal and oil company, Daybrook. ■ WESTERN CAPE BUSINESS 2021