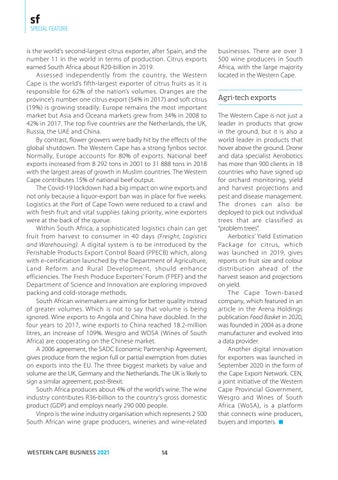 SPECIAL FEATURE is the world’s second-largest citrus exporter, after Spain, and the number 11 in the world in terms of production. Citrus exports earned South Africa about R20-billion in 2019. Assessed independently from the country, the Western Cape is the world’s fifth-largest exporter of citrus fruits as it is responsible for 62% of the nation’s volumes. Oranges are the province’s number one citrus export (54% in 2017) and soft citrus (19%) is growing steadily. Europe remains the most important market but Asia and Oceana markets grew from 34% in 2008 to 42% in 2017. The top five countries are the Netherlands, the UK, Russia, the UAE and China. By contrast, flower growers were badly hit by the effects of the global shutdown. The Western Cape has a strong fynbos sector. Normally, Europe accounts for 80% of exports. National beef exports increased from 8 292 tons in 2001 to 31 888 tons in 2018 with the largest areas of growth in Muslim countries. The Western Cape contributes 15% of national beef output. The Covid-19 lockdown had a big impact on wine exports and not only because a liquor-export ban was in place for five weeks. Logistics at the Port of Cape Town were reduced to a crawl and with fresh fruit and vital supplies taking priority, wine exporters were at the back of the queue. Within South Africa, a sophisticated logistics chain can get fruit from harvest to consumer in 40 days (Freight, Logistics and Warehousing). A digital system is to be introduced by the Perishable Products Export Control Board (PPECB) which, along with e-certification launched by the Department of Agriculture, Land Reform and Rural Development, should enhance efficiencies. The Fresh Produce Exporters’ Forum (FPEF) and the Department of Science and Innovation are exploring improved packing and cold-storage methods. South African winemakers are aiming for better quality instead of greater volumes. Which is not to say that volume is being ignored. Wine exports to Angola and China have doubled. In the four years to 2017, wine exports to China reached 18.2-million litres, an increase of 109%. Wesgro and WOSA (Wines of South Africa) are cooperating on the Chinese market. A 2006 agreement, the SADC Economic Partnership Agreement, gives produce from the region full or partial exemption from duties on exports into the EU. The three biggest markets by value and volume are the UK, Germany and the Netherlands. The UK is likely to sign a similar agreement, post-Brexit. South Africa produces about 4% of the world’s wine. The wine industry contributes R36-billion to the country’s gross domestic product (GDP) and employs nearly 290 000 people. Vinpro is the wine industry organisation which represents 2 500 South African wine grape producers, wineries and wine-related

businesses. There are over 3 500 wine producers in South Africa, with the large majority located in the Western Cape.

Agri-tech exports The Western Cape is not just a leader in products that grow in the ground, but it is also a world leader in products that hover above the ground. Drone and data specialist Aerobotics has more than 900 clients in 18 countries who have signed up for orchard monitoring, yield and harvest projections and pest and disease management. The drones can also be deployed to pick out individual trees that are classified as “problem trees”. Aerbotics’ Yield Estimation Pack age for citrus, which was launched in 2019, gives reports on fruit size and colour distribution ahead of the harvest season and projections on yield. The Cape Town-based company, which featured in an article in the Arena Holdings publication Food Basket in 2020, was founded in 2004 as a drone manufacturer and evolved into a data provider. Another digital innovation for exporters was launched in September 2020 in the form of the Cape Export Network. CEN, a joint initiative of the Western Cape Provincial Government, Wesgro and Wines of South Africa ( WoSA), is a platform that connects wine producers, buyers and importers. ■