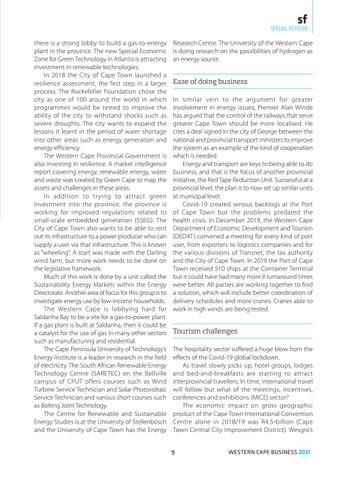 SPECIAL FEATURE there is a strong lobby to build a gas-to-energy plant in the province. The new Special Economic Zone for Green Technology in Atlantis is attracting investment in renewable technologies. In 2018 the City of Cape Town launched a resilience assessment, the first step in a larger process. The Rockefeller Foundation chose the city as one of 100 around the world in which programmes would be tested to improve the ability of the city to withstand shocks such as severe droughts. The city wants to expand the lessons it learnt in the period of water shortage into other areas such as energy generation and energy efficiency. The Western Cape Provincial Government is also investing in resilience. A market intelligence report covering energy, renewable energy, water and waste was created by Green Cape to map the assets and challenges in these areas. In addition to trying to attract green investment into the province, the province is working for improved regulations related to small-scale embedded generation (SSEG). The City of Cape Town also wants to be able to rent out its infrastructure to a power producer who can supply a user via that infrastructure. This is known as “wheeling”. A start was made with the Darling wind farm, but more work needs to be done on the legislative framework. Much of this work is done by a unit called the Sustainability Energy Markets within the Energy Directorate. Another area of focus for this group is to investigate energy use by low-income households. The Western Cape is lobbying hard for Saldanha Bay to be a site for a gas-to-power plant. If a gas plant is built at Saldanha, then it could be a catalyst for the use of gas in many other sectors such as manufacturing and residential. The Cape Peninsula University of Technology’s Energy Institute is a leader in research in the field of electricity. The South African Renewable Energy Technology Centre (SARETEC) on the Bellville campus of CPUT offers courses such as Wind Turbine Service Technician and Solar Photovoltaic Service Technician and various short courses such as Bolting Joint Technology. The Centre for Renewable and Sustainable Energy Studies is at the University of Stellenbosch and the University of Cape Town has the Energy

Research Centre. The University of the Western Cape is doing research on the possibilities of hydrogen as an energy source.

Ease of doing business In similar vein to the argument for greater involvement in energy issues, Premier Alan Winde has argued that the control of the railways that serve greater Cape Town should be more localised. He cites a deal signed in the city of George between the national and provincial transport ministers to improve the system as an example of the kind of cooperation which is needed. Energy and transport are keys to being able to do business, and that is the focus of another provincial initiative, the Red Tape Reduction Unit. Successful at a provincial level, the plan is to now set up similar units at municipal level. Covid-19 created serious backlogs at the Port of Cape Town but the problems predated the health crisis. In December 2019, the Western Cape Department of Economic Development and Tourism (DEDAT) convened a meeting for every kind of port user, from exporters to logistics companies and for the various divisions of Transnet, the tax authority and the City of Cape Town. In 2019 the Port of Cape Town received 510 ships at the Container Terminal but it could have had many more if turnaround times were better. All parties are working together to find a solution, which will include better coordination of delivery schedules and more cranes. Cranes able to work in high winds are being tested.

Tourism challenges The hospitality sector suffered a huge blow from the effects of the Covid-19 global lockdown. As travel slowly picks up, hotel groups, lodges and bed-and-breakfasts are starting to attract interprovincial travellers. In time, international travel will follow but what of the meetings, incentives, conferences and exhibitions (MICE) sector? The economic impact on gross geographic product of the Cape Town International Convention Centre alone in 2018/19 was R4.5-billion (Cape Town Central City Improvement District). Wesgro’s