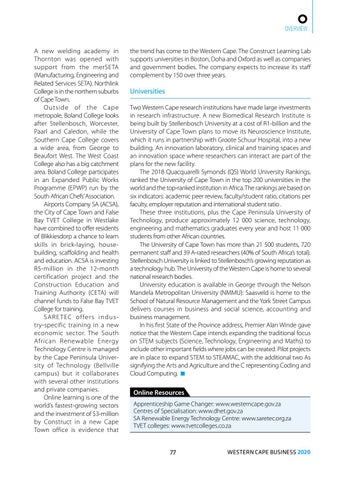 OVERVIEW A new welding academy in Thornton was opened with support from the merSETA (Manufacturing, Engineering and Related Services SETA). Northlink College is in the northern suburbs of Cape Town. Outside of the Cape metropole, Boland College looks after Stellenbosch, Worcester, Paarl and Caledon, while the Southern Cape College covers a wide area, from George to Beaufort West. The West Coast College also has a big catchment area. Boland College participates in an Expanded Public Works Programme (EPWP) run by the South African Chefs’ Association. Airports Company SA (ACSA), the City of Cape Town and False Bay TVET College in Westlake have combined to offer residents of Blikkiesdorp a chance to learn skills in brick-laying, housebuilding, scaffolding and health and education. ACSA is investing R5-million in the 12-month certification project and the Construction Education and Training Authority (CETA) will channel funds to False Bay TVET College for training. S A R E T E C o f fe r s i n d u s try-specific training in a new economic sector. The South African Renewable Energy Technology Centre is managed by the Cape Peninsula University of Technology (Bellville campus) but it collaborates with several other institutions and private companies. Online learning is one of the world’s fastest-growing sectors and the investment of $3-million by Construct in a new Cape Town office is evidence that

the trend has come to the Western Cape. The Construct Learning Lab supports universities in Boston, Doha and Oxford as well as companies and government bodies. The company expects to increase its staff complement by 150 over three years.

Universities Two Western Cape research institutions have made large investments in research infrastructure. A new Biomedical Research Institute is being built by Stellenbosch University at a cost of R1-billion and the University of Cape Town plans to move its Neuroscience Institute, which it runs in partnership with Groote Schuur Hospital, into a new building. An innovation laboratory, clinical and training spaces and an innovation space where researchers can interact are part of the plans for the new facility. The 2018 Quacquarelli Symonds (QS) World University Rankings, ranked the University of Cape Town in the top 200 universities in the world and the top-ranked institution in Africa. The rankings are based on six indicators: academic peer review, faculty/student ratio, citations per faculty, employer reputation and international student ratio . These three institutions, plus the Cape Peninsula University of Technology, produce approximately 12 000 science, technology, engineering and mathematics graduates every year and host 11 000 students from other African countries. The University of Cape Town has more than 21 500 students, 720 permanent staff and 39 A-rated researchers (40% of South Africa’s total). Stellenbosch University is linked to Stellenbosch’s growing reputation as a technology hub. The University of the Western Cape is home to several national research bodies. University education is available in George through the Nelson Mandela Metropolitan University (NMMU): Saasveld is home to the School of Natural Resource Management and the York Street Campus delivers courses in business and social science, accounting and business management. In his first State of the Province address, Premier Alan Winde gave notice that the Western Cape intends expanding the traditional focus on STEM subjects (Science, Technology, Engineering and Maths) to include other important fields where jobs can be created. Pilot projects are in place to expand STEM to STEAMAC, with the additional two As signifying the Arts and Agriculture and the C representing Coding and Cloud Computing. ■