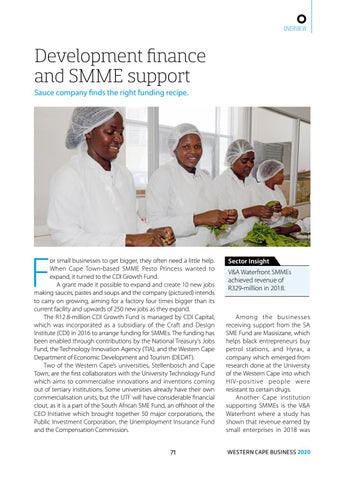 or small businesses to get bigger, they often need a little help. When Cape Town-based SMME Pesto Princess wanted to expand, it turned to the CDI Growth Fund.   A grant made it possible to expand and create 10 new jobs making sauces, pastes and soups and the company (pictured) intends to carry on growing, aiming for a factory four times bigger than its current facility and upwards of 250 new jobs as they expand. The R12.8-million CDI Growth Fund is managed by CDI Capital, which was incorporated as a subsidiary of the Craft and Design Institute (CDI) in 2016 to arrange funding for SMMEs. The funding has been enabled through contributions by the National Treasury’s Jobs Fund, the Technology Innovation Agency (TIA), and the Western Cape Department of Economic Development and Tourism (DEDAT). Two of the Western Cape’s universities, Stellenbosch and Cape Town, are the first collaborators with the University Technology Fund which aims to commercialise innovations and inventions coming out of tertiary institutions. Some universities already have their own commercialisation units, but the UTF will have considerable financial clout, as it is a part of the South African SME Fund, an offshoot of the CEO Initiative which brought together 50 major corporations, the Public Investment Corporation, the Unemployment Insurance Fund and the Compensation Commission.

Among the businesses receiving support from the SA SME Fund are Masisizane, which helps black entrepreneurs buy petrol stations, and Hyrax, a company which emerged from research done at the University of the Western Cape into which HIV-positive people were resistant to certain drugs. Another Cape institution supporting SMMEs is the V&A Waterfront where a study has shown that revenue earned by small enterprises in 2018 was WESTERN CAPE BUSINESS 2020