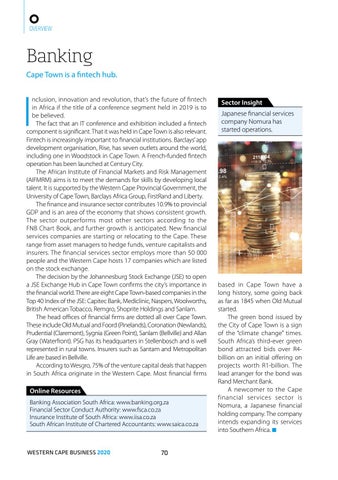 nclusion, innovation and revolution, that’s the future of fintech in Africa if the title of a conference segment held in 2019 is to be believed. The fact that an IT conference and exhibition included a fintech component is significant. That it was held in Cape Town is also relevant. Fintech is increasingly important to financial institutions. Barclays’ app development organisation, Rise, has seven outlets around the world, including one in Woodstock in Cape Town. A French-funded fintech operation has been launched at Century City. The African Institute of Financial Markets and Risk Management (AIFMRM) aims is to meet the demands for skills by developing local talent. It is supported by the Western Cape Provincial Government, the University of Cape Town, Barclays Africa Group, FirstRand and Liberty. The finance and insurance sector contributes 10.9% to provincial GDP and is an area of the economy that shows consistent growth. The sector outperforms most other sectors according to the FNB Chart Book, and further growth is anticipated. New financial services companies are starting or relocating to the Cape. These range from asset managers to hedge funds, venture capitalists and insurers. The financial services sector employs more than 50 000 people and the Western Cape hosts 17 companies which are listed on the stock exchange. The decision by the Johannesburg Stock Exchange (JSE) to open a JSE Exchange Hub in Cape Town confirms the city’s importance in the financial world. There are eight Cape Town-based companies in the Top 40 Index of the JSE: Capitec Bank, Mediclinic, Naspers, Woolworths, British American Tobacco, Remgro, Shoprite Holdings and Sanlam. The head offices of financial firms are dotted all over Cape Town. These include Old Mutual and Foord (Pinelands), Coronation (Newlands), Prudential (Claremont), Sygnia (Green Point), Sanlam (Bellville) and Allan Gray (Waterfront). PSG has its headquarters in Stellenbosch and is well represented in rural towns. Insurers such as Santam and Metropolitan Life are based in Bellville. According to Wesgro, 75% of the venture capital deals that happen in South Africa originate in the Western Cape. Most financial firms

based in Cape Town have a long history, some going back as far as 1845 when Old Mutual started. The green bond issued by the City of Cape Town is a sign of the “climate change” times. South Africa’s third-ever green bond attracted bids over R4billion on an initial offering on projects worth R1-billion. The lead arranger for the bond was Rand Merchant Bank. A newcomer to the Cape financial services sector is Nomura, a Japanese financial holding company. The company intends expanding its services into Southern Africa. ■