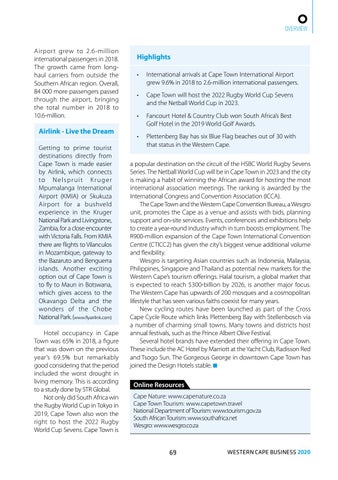 OVERVIEW Airport grew to 2.6-million international passengers in 2018. The growth came from longhaul carriers from outside the Southern African region. Overall, 84 000 more passengers passed through the airport, bringing the total number in 2018 to 10.6-million.

Airlink - Live the Dream Getting to prime tourist destinations directly from Cape Town is made easier by Airlink, which connects to Nelspruit Kruger Mpumalanga International Airport (KMIA) or Skukuza Airport for a bushveld experience in the Kruger National Park and Livingstone, Zambia, for a close encounter with Victoria Falls. From KMIA there are flights to Vilanculos in Mozambique, gateway to the Bazaruto and Benguerra islands. Another exciting option out of Cape Town is to fly to Maun in Botswana, which gives access to the Okavango Delta and the wonders of the Chobe National Park. (www.flyairlink.com) Hotel occupancy in Cape Town was 65% in 2018, a figure that was down on the previous year’s 69.5% but remarkably good considering that the period included the worst drought in living memory. This is according to a study done by STR Global. Not only did South Africa win the Rugby World Cup in Tokyo in 2019, Cape Town also won the right to host the 2022 Rugby World Cup Sevens. Cape Town is

Highlights • International arrivals at Cape Town International Airport grew 9.6% in 2018 to 2.6-million international passengers. • Cape Town will host the 2022 Rugby World Cup Sevens and the Netball World Cup in 2023. • Fancourt Hotel & Country Club won South Africa’s Best Golf Hotel in the 2019 World Golf Awards. • Plettenberg Bay has six Blue Flag beaches out of 30 with that status in the Western Cape. a popular destination on the circuit of the HSBC World Rugby Sevens Series. The Netball World Cup will be in Cape Town in 2023 and the city is making a habit of winning the African award for hosting the most international association meetings. The ranking is awarded by the International Congress and Convention Association (ICCA). The Cape Town and the Western Cape Convention Bureau, a Wesgro unit, promotes the Cape as a venue and assists with bids, planning support and on-site services. Events, conferences and exhibitions help to create a year-round industry which in turn boosts employment. The R900-million expansion of the Cape Town International Convention Centre (CTICC2) has given the city’s biggest venue additional volume and flexibility. Wesgro is targeting Asian countries such as Indonesia, Malaysia, Philippines, Singapore and Thailand as potential new markets for the Western Cape’s tourism offerings. Halal tourism, a global market that is expected to reach $300-billion by 2026, is another major focus. The Western Cape has upwards of 200 mosques and a cosmopolitan lifestyle that has seen various faiths coexist for many years. New cycling routes have been launched as part of the Cross Cape Cycle Route which links Plettenberg Bay with Stellenbosch via a number of charming small towns. Many towns and districts host annual festivals, such as the Prince Albert Olive Festival. Several hotel brands have extended their offering in Cape Town. These include the AC Hotel by Marriott at the Yacht Club, Radisson Red and Tsogo Sun. The Gorgeous George in downtown Cape Town has joined the Design Hotels stable. ■